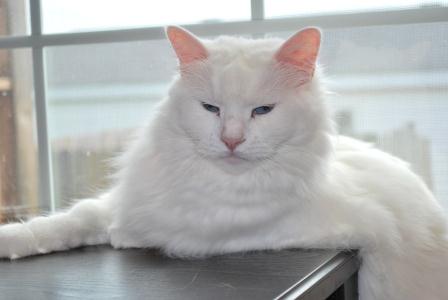 Harry is a beautiful white Ragdoll who was kind of rescued from a breeder.  No he does not recommend his breeder, and we don’t want to go into too many details because the breeder is no longer in business.  It was an ugly situation that we weren’t really involved in, but suffice it to say that Harry needed help when we adopted him.

Harry is registered with TICA under a different name, but he is Harry to us, named after Harry Potter because for some reason he reminded me of Harry Potter when we got him!  My husband quickly started calling him Harry Plopper because he will plop down right in our path or in a doorway we’re trying to get through.

We had Maine Coons prior to adopting Harry, and he scared the bejeebers out of them for the first couple of days!  I think it was because of his white color.  They’d apparently never seen a white cat before.  He is a very, very gentle cat so there was no reason for alarm.   After they saw that he liked to play, they began to play with him and everybody gets along fine now.   But there are “language” differences, and he often looks like he’s trying to figure them out.   He’s very expressive. 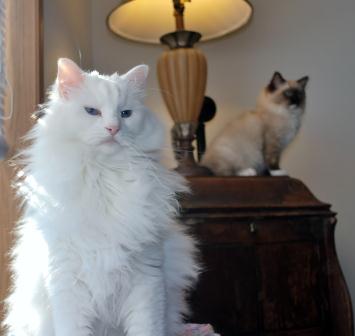 Harry and little Moose in the background

So last year we adopted a ragdoll brother for Harry (Moose) so he would have a companion of his own breed.  It’s the best thing we could have done for him because they are inseperable and it’s helped him to relax and play Ragdoll games which are apparently somewhat different from Maine Coon games.  Watching Harry greet Moose was hilarious so I called it the Ragdoll greeting ritual – long form.  He would approach with his ears back, circle Moose, then act like he didn’t see him, then pounce and they’d start bunny-kicking each other.  Moose seemed to understand whatever was going on which is why I assumed it was a Ragdoll thing.

Harry’s favorite toy in all the world are the tiny, cheap fur-covered mousies that rattle.  I buy them by the box because they’re always getting lost.  He throws them and tries to catch them, he pushes them under everything, he chews their tails off, and he’s often putting them in the dogs’ water dish to clean them.   Once for 3 days in a row my husband fished  the same one out of the water and threw it away.   Overnight Harry would retrieve it from the wastebasket and put it back in the water.  Did I mention he’s stubborn?

The day after we brought him home, we put him in the carrier to go to a vet appointment to get him checked.  He was terrified until he saw he was at the vet and then he calmed down.  I really think that he thought we were returning him to the breeder, and he didn’t want to go.  When we got back home he was giddy, and he’d only lived with us 24 hours!  It took him a little while to get used to sitting beside or on us and getting petted, but now he often sleeps right next to me and I wake up with a face full of white fur.  In the morning he wants us to get out of bed so he can have the whole bed to himself, although now he does share with Moose.

Harry turns 5 years old this summer, and has lived with us for 4 years.  He’s a very happy cat now and would like everyone to appreciate the white ragdoll, even though they aren’t accepted in shows.  He is not as floppy as most ragdolls, but he is very sweet, gentle and intelligent. 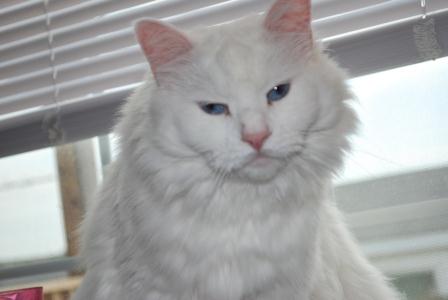 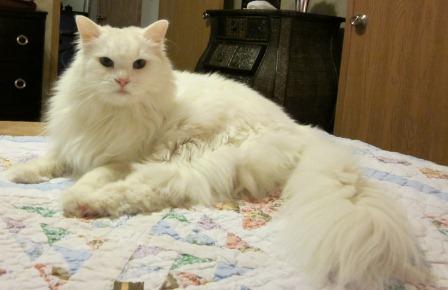