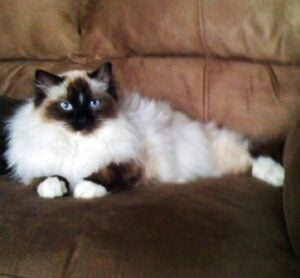 Hank, a Seal Mitted Ragdoll with a Blaze

This is Hank...my sweet, adorable, almost 1 year old (April 29th) Ragdoll. Hank and his brother Howie the Bengal kitty, love to lounge around the house all day.

Hank was born on April 29th, 2010.  The whole drive to the breeder's  house I was trying to think of what I wanted to name my new kitty. When I got there, the breeder had already named him "Hank."  My name starts with "H" too, so it was perfect! I'm also a fan of Kendra & Hank.  When I got my Bengal (1 month later) I HAD to give him an "H" name too (his name is Howie).

Hank is from WRF Ragdolls.  I would definitely recommend them.

I first became interested in Ragdolls when I had to put my dear 16 year old Cat Lizzie down last July. A friend of mine had a Ragdoll and he just had the cutest personality ever! 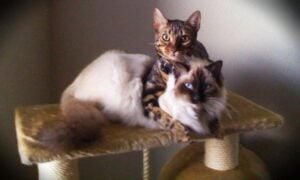 Hank and his brother Howie, the Bengal kitty, love to lounge around the house all day. I usually always see Hank in the window sill when I come home. He always rushes right to the door when he knows Mommy is home. Hank spends most of his time lounging in his scratch lounge.  He loves furry balls and loves to run around the hardwood floors chasing the laser light. He will never pass up a belly rub either! Hank's quiet meow is so sweet, bur very rare. When he meows, I know he either wants foods or his brother has trapped himself in the closet! When Hank and Howie play, usually Howie instigates it, but occassionaly Hank gets fired up and starts chasing Howie! They bring out the best in each other. Hank came first, and then about a month later I decided Hank needed a playmate. I actually took Hank to the Bengal's breeders home. Howie was the 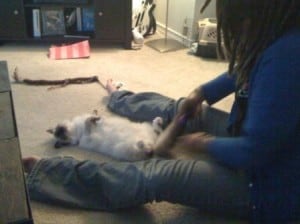 only one interested in Hank so I knew he was the one! They have been best buds ever since! Howie loves Hank's soft fur, and uses him as a pillow as often as he can. Hank pretty much lets Howie cuddle with him whenever! It's so cute to wake up and find both of my kitties not only cuddling with each other, but with me. 🙂

Hank always lets his brother steal the spotlight which is so cute. He is very sweet and wouldn't harm a fly! It is cute to see him all riled up from playing with Howie. They play very well together and couldn't be any closer! They are so opposite, but in the same sense, they bring out the best in each other. Hank is my angel...which isn't hard when his brother Howie is always tearing up the toliet paper or dumping over all the trashcans. Sometimes I think Hank is on to this and knows Howie will get the blame! 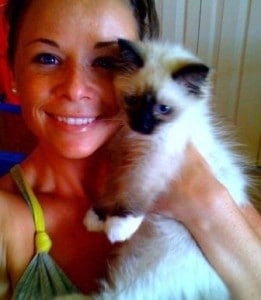 Holly and Hank as a Kitten

As far as recommendations, I recommend the Scratch Lounge all the way!!! My Begal kitty loves it too. I have it on top of my kitty condo. I'm serious...Hank and Howie literally "lounge" in their scratch lounge all the time! If Hank is already laying there, Howie has no problem making Hank make room for him! Hank, on the other hand, would never do that! He's too sweet. 🙂 He also loved to sit in any box he could when he was a kitten.

I look forward to Hank growing and getting his full color. I can't wait for his personality to come out even more! His big day is coming soon...he'll be one! His brother, Howie, is only a few weeks younger. Oh no...the terrible two's here I come! I'm sure Hank will be the angel he always is. 🙂