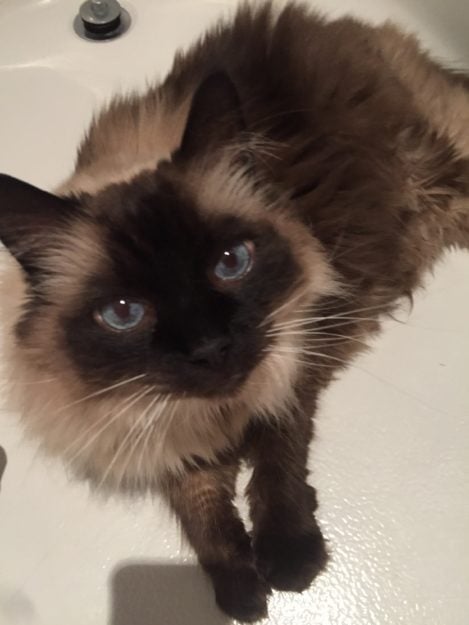 My Ragdoll cat is from a breeder and his name is Gus. Around 2007 my grandparents decided they wanted a pet cat, but not any cat, a Ragdoll cat. None of us can remember the name of the breeder they used but it was somewhere near Philadelphia, Pennsylvania which is where we are from. Anyway, Gus’s first home was at my grandparents house. They enjoyed him for several years but ultimately had to make the difficult decision to re-home him because they were unable to care for Gus adequately. This was due to their mobility issues related to health problems they had, such as arthritis. Gus's second home became my aunt and uncles house around 2010, and he stayed there about 7 years total. Due to my uncle’s allergies and my aunt getting a new dog, they asked me if I would give Gus a home. I already love cats in general so of course I agreed.I first became aware of the Ragdoll cat breed when I was a kid. My mom bought my sister and I a coffee table book that was basically an “encyclopedia” of cat breeds. I remember spending extra time looking at the pages about Ragdoll cats, and thinking that if I could choose any cat of my own, I would want a Ragdoll because of their pleasant dispositions. As I was growing up my family had this one particularly affectionate and gregarious rescue cat that we loved dearly. Needless to say, I remember feeling very excited when I was first told that my grandparents were going to get a Ragdoll kitty! 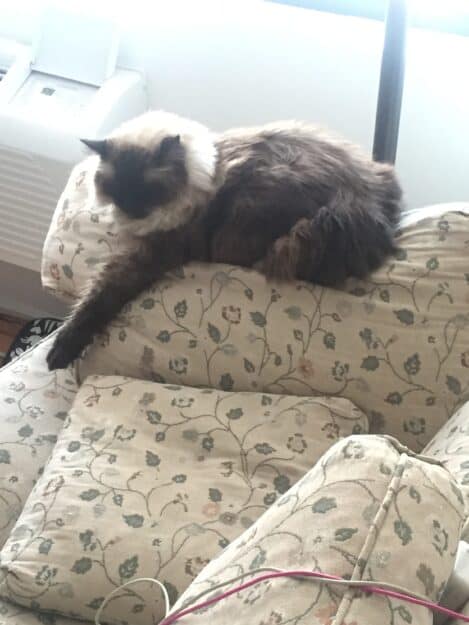 I met Gus for the first time after my grandparents brought him home to their apartment, and I loved him right away. I was already used to being around cats since my family and I at the time had 2 of our own rescued cats which we had since they were kittens (they were not Ragdolls). Gus is now about 9 years old so I have not had him his whole life by any stretch (no pun intended). It is interesting that he has always been in my family, just different homes within my family, so I’ve known him since he was a kitten. He was born in 2008, and his arrival home with my grandparents was delayed because when he was at the vet getting neutered he starting showing signs of respiratory distress. He ended up needing emergent upper abdominal surgery to fix the problem. As far as I know he has not had breathing problems since!Gus has always been on the playful side, and still likes to play especially with catnip toys. He also likes to talk, he tends to be quite vocal. When I talk to him he will sometimes respond with appropriately timed meows. He likes running water from the sink or the bathtub, but he does not like to be bathed. He likes to drink the water right from the faucet when possible and will meow in complaint sometimes until I turn the tub faucet on. He eats wet food and a little bit of dry food, he really likes wet food though. I give some dry food because the vet prescribed this one dry food for his urinary tract, but Gus does not eat much of it because he prefers wet. He likes sitting on the windowsill and watching my laundry spin around in my frontloading washing machine. The only treats he will eat so far are Purebites brand freeze-dried chicken. He likes Purebites beef and shrimp too, but not as much as the chicken. Gus likes watching Floppycats on YouTube with me! He is not much of a lap cat, but he will sleep next to me on the bed or on the floor. 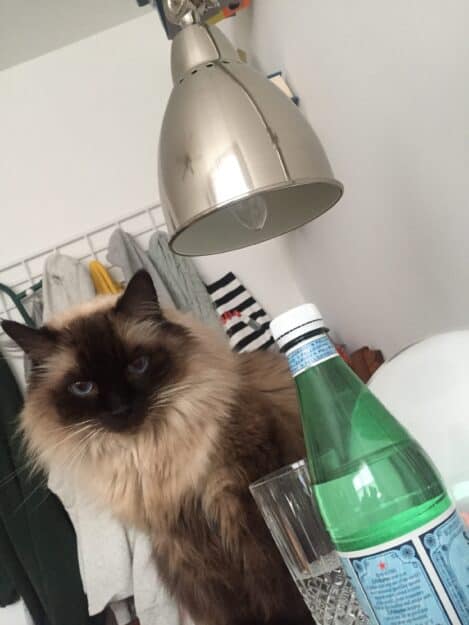 Since I have only had Gus for a few months, I have not had much of a chance to try different products to see if we have preferences. I did order him a merino wool cat cave from Earthtone Solutions and it arrived the other day, he has been sleeping in it so I think he likes it! I have a Gleener brush, which is for removing pet hair, and other pilling/fibers, from furniture and clothes. I would recommend it for your clothes. 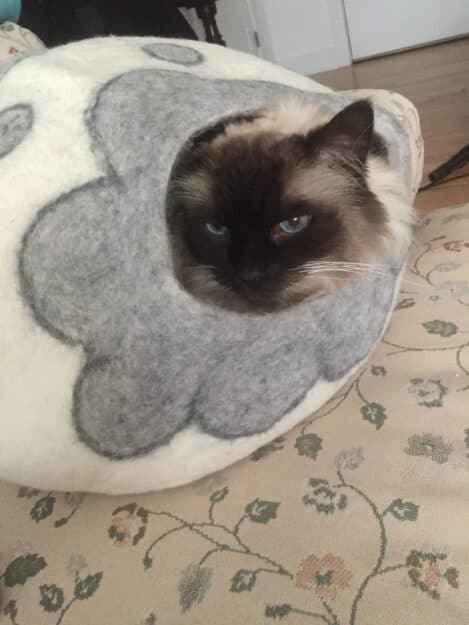 Gus’s coat is so soft, and his tail is a good length, not too short. He has nice big paws, very proportionate for him. I really like that he has a seal colored nose and paw pads, so cute! It has been easy to brush him and he is pretty good about self-cleaning otherwise. I really thought he would have problems with matting but he stays silky smooth like rabbits fur. I brush him primarily to make sure shedding is under control and to help distribute his natural hair oils. I have never had a medium-long-haired cat so I wasn’t really sure what to expect, but caring for Gus has been very doable. This may be because he has always been pretty laid-back with no behavioral issues. 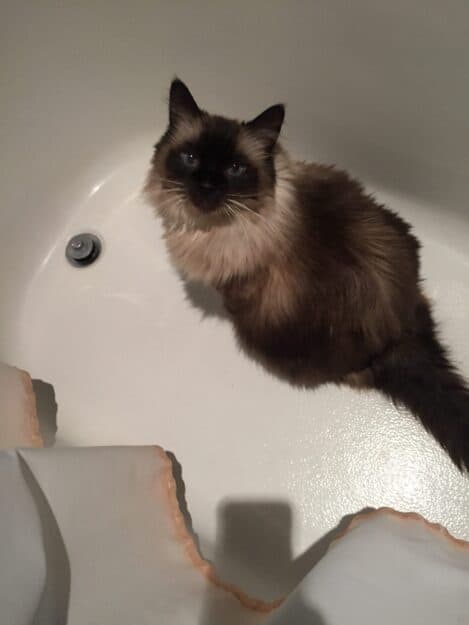 I am never sure how people will react when I tell them my cat’s name is Gus. People either scratch their heads, or kind of chuckle when I tell them. My grandmother named him, and I remember she said she chose it because she thought the idea of a large male cat with the name Gus was amusing, and I have to say it does suit him. I think it’s the irony of a very masculine sounding name for such a pretty looking cat. Gus also has a low-pitched, almost hoarse sounding meow, which really adds to his manliness, as I am sure you can imagine. I had never heard such a low-pitched meow until I heard Gus.I would recommend Ragdoll cats to anyone who wants a kitty and has any interest in this breed. They really are like puppy-cats, Gus meets me at the door when I come in after being out. I can hear him start meowing when I put the key in the door! Ragdoll cats, including Gus, usually love playing and being around people. That being said, you may want to “cat-proof” your living situation via securing breakables. With a new kitty, you might not be able to tell how much of a jumper they are until you turn around to find they are already slinking across a shelf next to a breakable object, and knocking it onto the floor. I did not need to worry about this so much when I got Gus since he is older now and not jumping too much. When he was a younger kitten he was a definite jumper!Do you have a Ragdoll Kitten or Cat?  Consider submitting your kitty!  Ragdoll of the Week submission guidelines