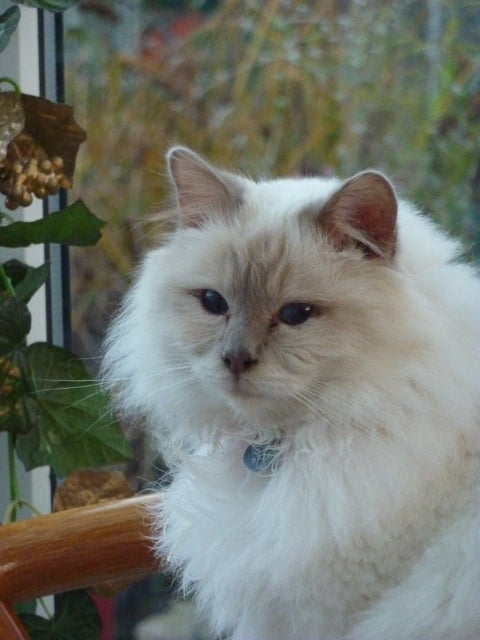 Christmas Day was coming to an end, the family visited in the morning, Mum and Dad had had Christmas Lunch with us and we had watched the Queen at 3.00 p.m. The two of us were settling down to watch the Christmas Special of Downton Abbey and George sprang to life. With a loud ‘Meow’ and a jump into the toy box, it was time to play. I looked at my husband, Kevin, and said ‘how did we become parents again at 62 years old?’

Rewind twelve weeks and we had lost of beloved black and white cat ‘Sharkey’ (named after the local rugby team!) of a throat tumour. We had a decision is make ‘do we get another cat?’ Kevin said ‘the place is not the same without a cat, yes we do!’ 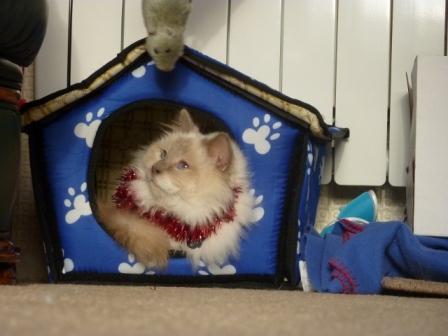 Well here was the dilemma 62 years old and about to retire, and we had already bought a Touring Caravan to spend a few trips away in the coming years. It would be wrong to get a cat and leave it for our neighbour, Allan to feed and look after. The decision was made to find a cat we could take away with us, a house cat or even a caravan cat! 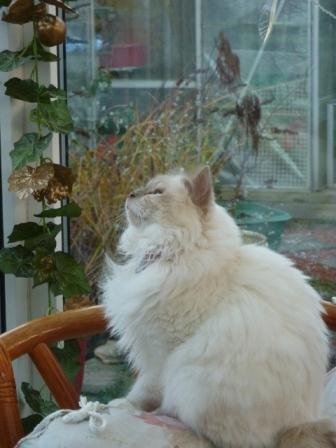 After much research we decided a Ragdoll fitted our requirements and started looking in the local paper and on the internet. I hit the website pets4homes and there were lots of kittens but we thought the prices a little bit steep. Just a week later there appeared an advert for a two year old, un-neutered male. The reason for the sale was the owner was relocating to a job in another part of England. I tried to telephone but the number did not work, I duly emailed ‘Julie’ and was told that she had a lovely boy ‘Jeddy’ who had not been in contact with other cats, dogs or children.

After a couple of emails ‘Jeddy’ was delivered to our house by her son who just said it was his Mum’s cat and did not know anything about the cat. Well this thin, moulting cat came of the cat carrier and was all over us like a ‘rash’! We fell in love and duly paid £100 and off he went. 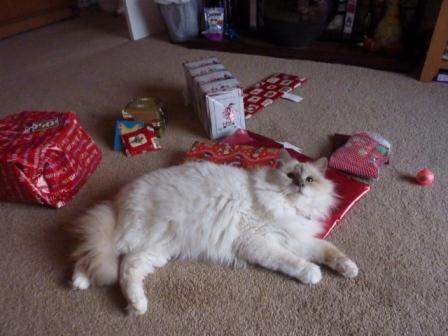 Next day we realised ‘Jeddy’ was a sick Ragdoll, thin, diarrhea, vomiting, flatulent, gum problems, sneezing and coughing. Monday he was taken to the vets and diagnosed with incurable Cat Flu! A shot of antibiotic and another of steroids and most of the other problems cleared up. But, the Vet seemed to miss the coffee like granules in his ears – ear-mites and scabs at the back of the ears. Just a few doses of drops and we got rid of them little blighters! 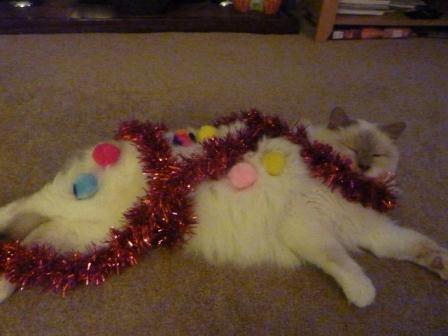 After much good food George (renamed after both our grandfathers) has gone from 6.6lbs to 8.5lbs. The Cat Flu symptoms have gone into remission and as long has George is kept stress free the Cat Flu will be no problem. His face is washed every day because he gets ‘sleepy’ bits in his eye corners, but like any little boy, he runs away as soon as he sees those cotton balls! We had him neutered, and he did not even notice that certain parts of him were missing, bless! The only problem left is scabs at the back of his ears from the ear mites. We diligently apply cream from the vets, but those big old claws can hack a chunk of flesh out pretty quickly. We clap our hands when that big rear foot comes up to have a scratch, he looks at us most bewildered.

Gorgeous George is lovely, calm, beautiful Ragdoll. We take him on visits to various friends and relatives so he can get used to traveling with us next Summer. He goes out into the garden on harness and lead, George sniffs at the grass and plants or just sits on the path sniffing the air!

George loves to play with fluffy balls, rolled up bits of paper, play football (think he could be the next striker for England!).
So finally my question to you is ‘Did we buy a Ragdoll?’ or ‘Did we rescue a Ragdoll?’