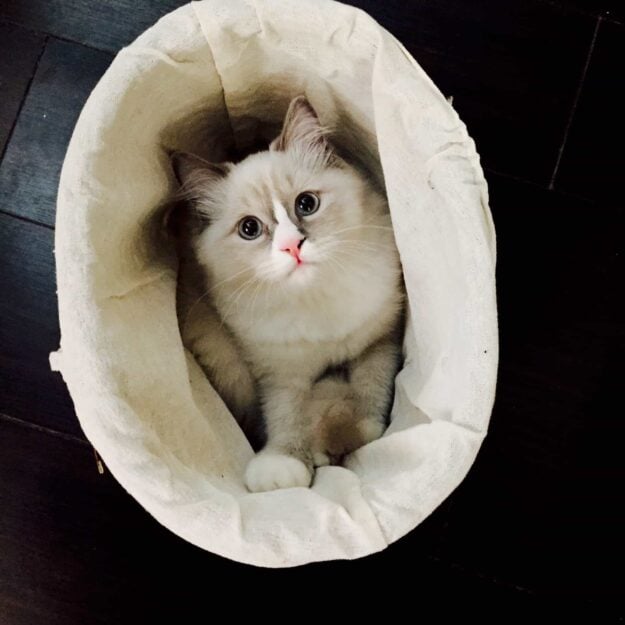 Hello fellow Ragdoll-lovers! I’ve always been totally in love with cats of all kinds, sometimes I feel like the OG cat lady. My friends even referred to me as a “cat lady without a cat” for awhile. I know it may be hard to believe, but there was a time in my life where I didn’t consider Ragdolls to be the best cats, but all of that changed when I met my sweet, lovable giant, Gordo. 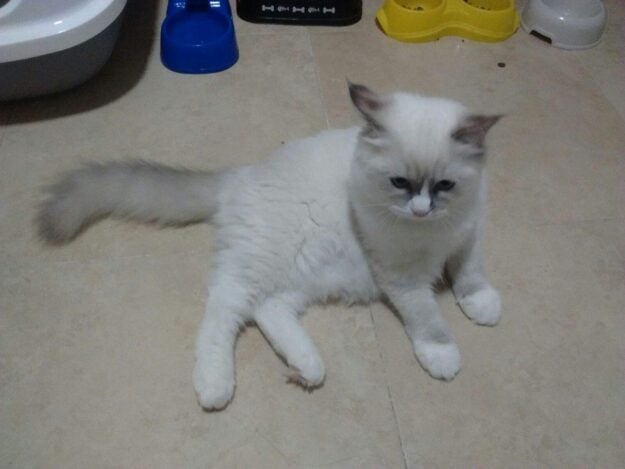 For the past three years or so, I have been living in Madrid, Spain. In early 2015, I heard from some friends in Avila, Spain that their two cats were going to have a litter of kittens! I really didn’t think much of it, but after some thinking and, of course, seeing pictures of the 8 little hairless creatures, and the beautiful cats who made them, I decided to call them up and see if they had an extra one that I might be able to take off their hands. A couple months later, I was given Gordo! By far the BEST gift I have ever received (a sort of late birthday gift because Gordo and I were both born in April).

At first Gordo was not what I had imagined. I went to their house about a month after the kitties were born (May 2015) to see all of them, and boy were they fun! Fluffy little balls of fur. There were three available as the other five had been reserved as gifts or reserved to sell. I decided on one that I wanted and it wasn’t Gordo. Gordo, who was originally called Varoufakis (what can I say? My friends have good senses of humor), was actually pretty standoffish, and for a long time my friend would joke “No lo soporto!” (roughly: I don’t support or agree with the things he does!). He was a little troublemaker. But as he got older he became a bit of a crowd favorite. He was patient, quiet, and affectionate at times, but also independent and had a distinct personality. My friend started calling him “Gordo” because he was clearly the largest in the litter, kind of a bumbling fluffy giant. “Gordo” means “fat” in Spanish. 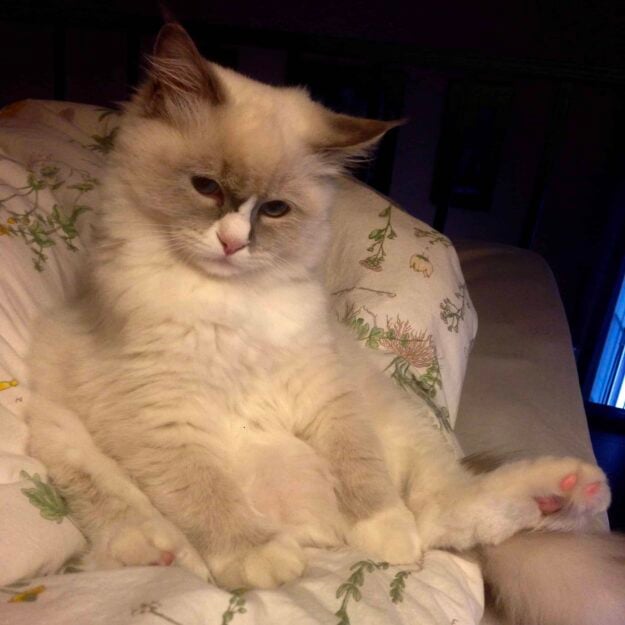 When I got Gordo and took him home at the end of the summer (first I came back to the states for a vacation and to visit friends and family) I thought – “oh, I’ll name him something cute, like Rory” but alas, Gordo stuck all too well with him, and I couldn’t bring myself to change it. And the truth is that after finally getting to bring him home, I couldn’t have cared less about his name. 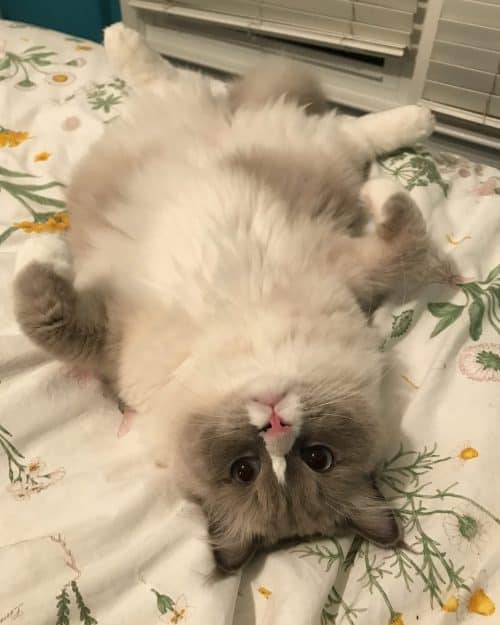 A couple years later, Gordo was a bona fide member of the family, and weighing in at a healthy 15 lbs, he’s roughly the size of a toddler! When I decided I wanted to move back to the states, I knew I had to bring Gordo with me. Obviously there was no way I could leave him anywhere, so I vowed to do everything correctly and on time to smooth the process of taking him to the states. Coming from the EU it was much easier than one might think. I’ll walk you through some of the steps, but I urge you to do your own research because laws are constantly changing and countries have different things they want to see for different pets and different situations! 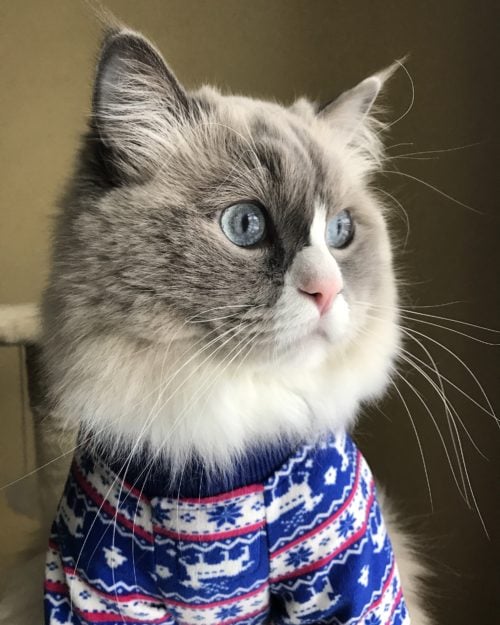 1. Healthy Cat Certificate. In Spain particularly, I needed to make sure that Gordo had his rabies shots, and that he was microchipped in case he got lost. That was easy, because all pets in Madrid must be microchipped by law. I also needed a certificate of health from Gordo’s vet ensuring that to his knowledge, Gordo had no communicable diseases, or any other health issues that may risk his life during travel. I had to get this certificate at maximum 10 days before travel, and the certificate was good for 90 days.

2. Pet Passport. After obtaining the certificate of health (at the same appointment) the vet created a “pet passport” for Gordo, essentially a booklet stating Gordo’s D.O.B., weight, color, name, a picture of him, microchip information, my information and his list of shots and medications. This was much like what you would expect in a regular passport. This would allow him to travel across and outside EU borders.

3. Airline restrictions. These restrictions can be found on most airline’s websites, but it also doesn’t hurt to call and confirm! This essential told me the maximum sized kennel, the style it needed to be, etc. The airline will also have certain temperature restrictions. Because animals will spend so much time on the tarmac waiting to be loaded, unloaded, and taken inside, the airline will not allow pets to be taken in the cargo when the temp is too high or low. Check with airlines for the specific temperatures. Unfortunately, I was flying in December from Madrid to Dallas, then Dallas to Kansas City which had a super cold forecast. At the airport on the day of travel I had to cancel my Dallas to KC flight, because of the temperature. I decided to rent a car in Dallas and drive to Kansas City instead. Honestly, I was just glad to have gotten Gordo to North America at the time! I didn’t care what I needed to do.

4. Making the cat comfortable. Unfortunately on transatlantic flights no pets are allowed in the cabin, and all must go “underneath” in the cargo. Although this made me anxious at first, I feel it was a good decision, and after meeting the airline workers who work with the pets (I’m looking at you Iberia and American Airlines!) I felt confident that they wanted comfort and safety for Gordo. They eased my mind a lot! I got Gordo kind of a laughably large kennel (he’s a big cat, but people were thinking I had a dog with me). I tricked out the inside with absorbent pads in the bottom, a blanket from home with a pocket so he could hide, and of course attachable bowls for food and water when the airline workers could give it to him. I always DOUSED the thing in Feliway, the cat pheromone spray, which has been a lifesaver for when I move apartments, or travel with Gordo. For several weeks before the flight I left the kennel out in my apartment, exactly as it would look on the day of travel. When he got inside it I would give him a treat. And when he came out I gave him a treat, and sometimes I would close him in there for a little while so he could get used to being in there. I really think this helped more than anything on the day of travel. I didn’t give him any medication for sedation, as some vets do not recommend it. Instead I relied on the fact that Gordo would be aware of the kennel, it would smell like my apartment and Feliway, and that the airline workers would do their best with him. 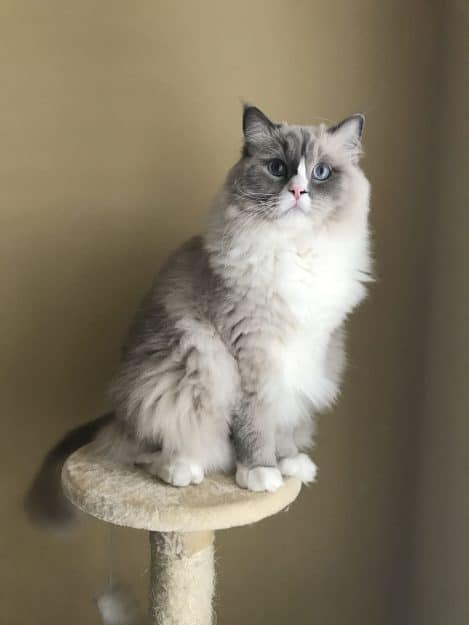 All in all it was a success! Gordo and I made it to America safe and sound, and the first night at a pet friendly hotel, Gordo was as playful as ever and later he was asleep by my side as he always is, purring and snoring. 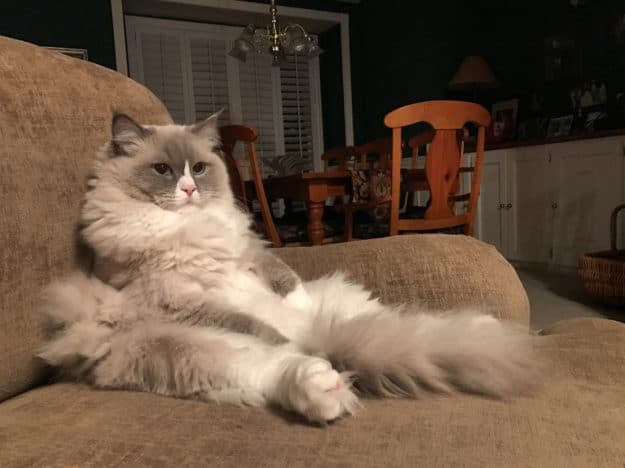 In any case, this trip had several months of research and preparation put into it, I wanted to make sure I did the best I could for Gordo because I know travel is really stressful, even for me! I was patient, calm, and understanding, which made the whole process (which was a bit hectic) much smoother and less stressful. And now my kitty and I are happily back at home, though adjusting to jet lag with a cat is quite another matter… 😉

3 thoughts on “Gordo – Ragdoll of the Week”