While Gobbler is not a usual cat name, it’s the name my queen had at the Humane Society for 9 months before I brought her home to start her new life. I was a volunteer there and by that time, I had already been calling her Gobbler for the better part of a year and couldn’t imagine her as anyone else. 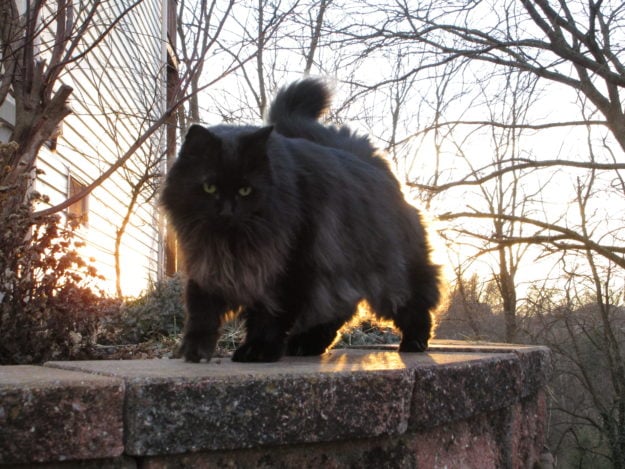 Gobbler is a beautiful cat and many people were interested in her, but she would totally blow her interviews by biting down with the strongest, most intense bite you’ve ever had from a cat. Your limb could feel the vibration and you would be bruised for a week.

With Gobbler, it was “death bite” or nothing, there was no in-between! No one knew her background because she was a stray. She was picked up on a rural street corner and brought to the shelter. She was estimated to be a little over 2 years old, and she was already front declawed and spayed. For nine months, no one came to claim her and no one adopted her, either. 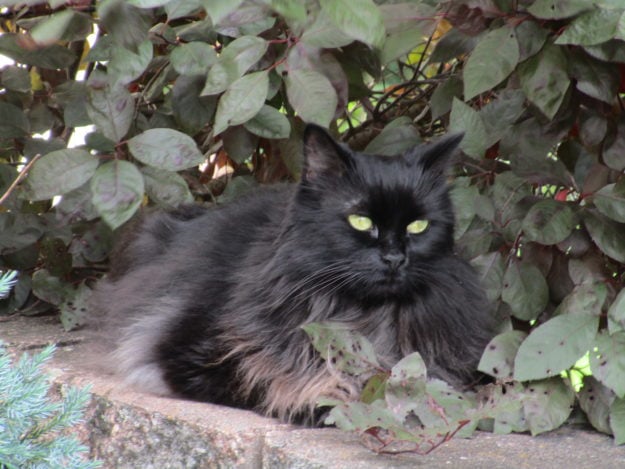 Although I am a cat lover through and through, I hadn’t yet adopted my own cat since moving out of my parents’ house and into my own apartment 3 years earlier. I felt I was too busy and could not devote enough time to a pet. However, my mother picked up on how often I spoke of Gobbler and for Christmas, Santa Claus (Claws?) gave me a check which was mysteriously in the amount of the shelter adoption fee. Gobbler came home with me on January 4, 2010. 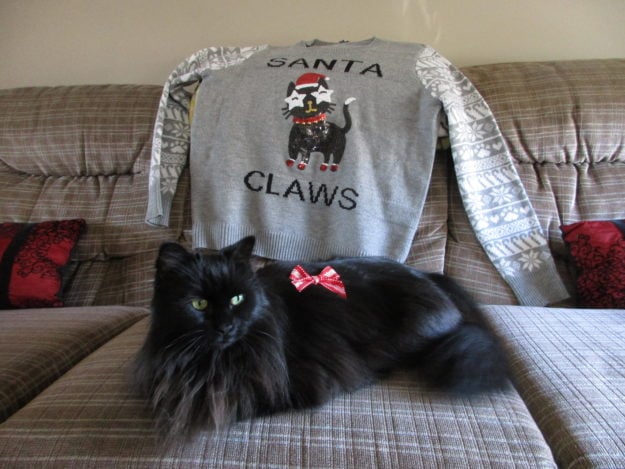 Gobbler is now 14 years old and we have been together the last 11 of those years. I had a wide variety of cats my entire life, so please know that I’ve done my research when I say she has been the purrfect cat. She hasn’t destroyed anything, she always uses the litterbox, she never wakes me up for food, she is playful, she loves to snuggle, she is a light eater and stays in shape on her own, she has a beautiful coat and takes great care of it (because there are parts I can’t touch!), and until last year, her medical needs have been minimal with just her annual shots needed. She is quite the talker, too. Above all, she loves me and is loyal to me with all her heart. I feel she definitely chose the correct human for her long-term needs. 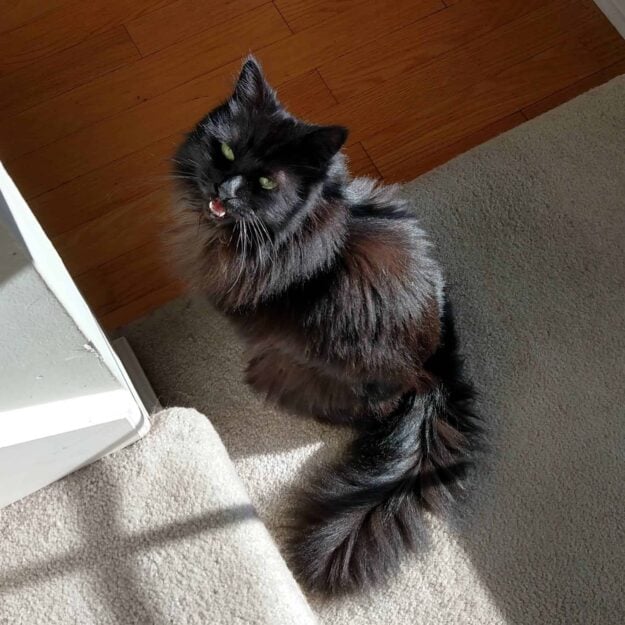 She has a variety of wand toys which I call blue thing, new blue thing, purple thing, green thing, etc. Her first toy was blue thing, which also came from my mother. Despite all the other toys which have appeared since then, she always goes back to dragging blue thing around and yowling. She also yowls when she walks around with jingly fish in her mouth. She has been a huge fan of jingly toys ever since she was at the shelter. You should see her chase a jingle ball. It’s like she’s just sprinting and the ball magically stays glued to her front paws with each step. In spite of all this action, she is a pro at napping; especially in the sun. 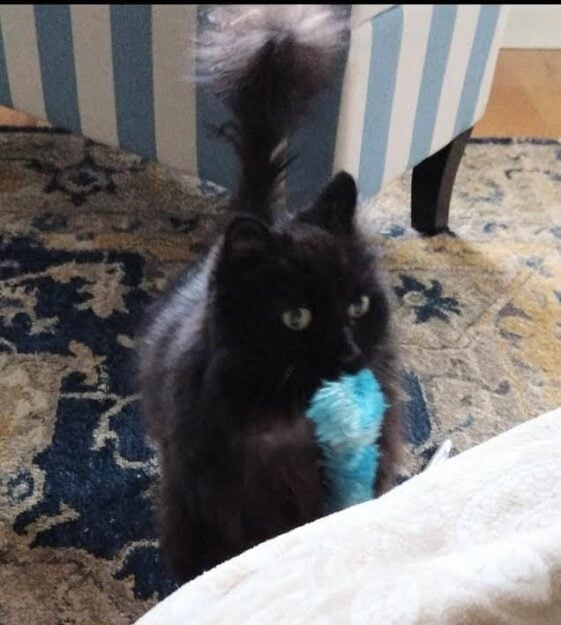 Gobs is an indoor cat, but is a yard roamer. She is not allowed outside without me. She will go chew grass and stalk birds, chipmunks, and moths. It’s fun to see her big, furry paw smack a dopey, fuzzy bumble-bee out of mid-air. One time, a stray cat showed up and – since she hates cats – she went running straight for him! I yelled and she turned around and ran in the house. She is the best girl! Her outdoor adventures lend themselves well to photo shoots, even though she’s not happy about me putting “that clicky thing” in front of her face all the time. 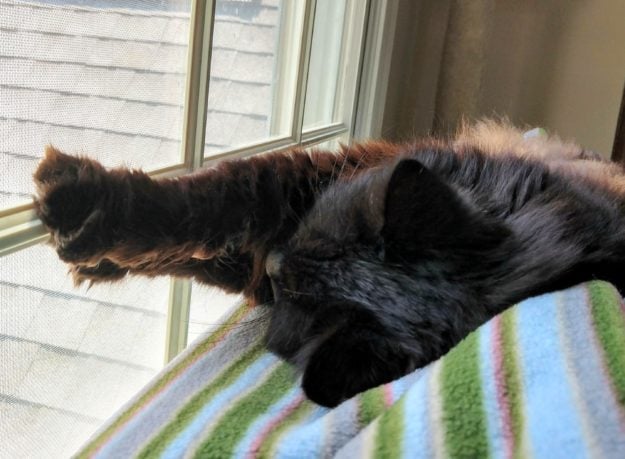 While she has never been a huge fan of food, she does go wild for Temptations treats and also Greenies pill pockets. She’s a fish girl so I get her salmon and tuna flavors whenever I can. She has also been very good about not begging for human food, with a few exceptions. LETTUCE!!! She will knock me over to get to my salad. She also enjoys lunch meat, ginger snaps, dinner rolls, and butter. Every day, she thinks she likes milk, and then every day when I give her some, she turns up her nose and walks away. 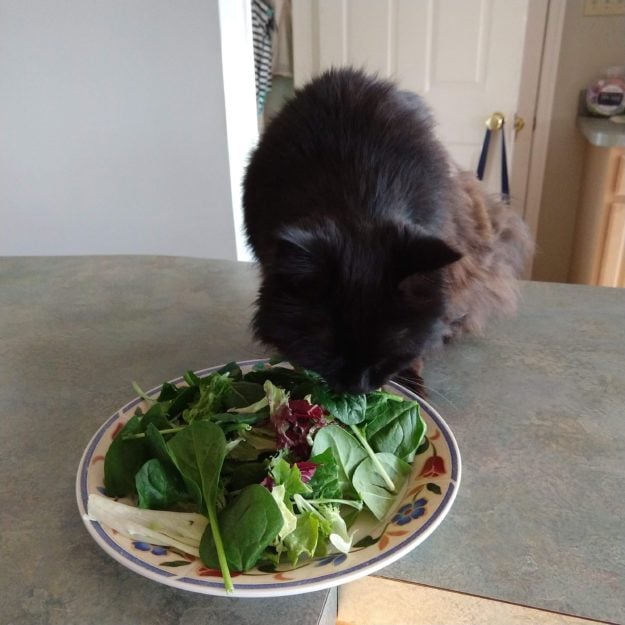 In August 2020, I watched her breathing for a couple days and thought to myself “is that how she normally breathes?” It seemed odd and rapid and her whole body moved, but I had never paid attention to her breathing. I was worried after a weekend and I took her to an emergency room on a Monday afternoon. Pleural effusion – fluid in the chest cavity – was causing her restricted breathing. They drained the fluid but she had a large mass in her chest which was causing the fluid. This started a long journey of finding a kitty oncologist and traveling to weekly chemotherapy visits. Did I mention she hates the car and being in her carrier? This was not a fun time for either of us. 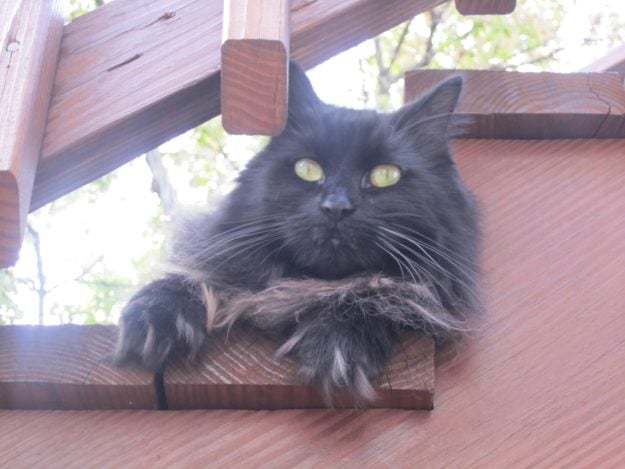 She was in remission for several months, but in March, the vet said the mass was back and was resistant to the chemotherapy drugs. It was time to just keep her home and make her comfortable and happy.

It’s now 2 ½ months later and I am a wreck about her every day. Not just because I’m going to lose her soon, but because I can’t tell how she’s feeling. It’s a constant whirlwind of mind games, thinking she seems uncomfortable and is breathing too fast and a few hours later, she’s happy and chasing chipmunks in the yard. No matter how much torture this is, I would do anything for my queen and I am glad to be filling her days with good times.

While the COVID-19 pandemic was tragic all around, the timing could not have been better for me and Gobbler. I have been working from home throughout her ordeal with lymphoma, so I was able to take her to all appointments, give her all her medications at the right times (at one point it was 4 pills a day!) and monitor and comfort her throughout the day. I cannot imagine what this experience would have been like if I had to be away in an office, thinking about her all day and not knowing what’s happening. I am thankful to have been able to spend so much time with her in her final year or two of life.

For more than 11 years, this purrfect cat has brought me such joy and never left my side. I am very glad she has made it at least into June because she just loves her outdoor adventures. She and I will be adventuring every day until she can’t adventure any more. I am grateful for every moment we have until then.

Sadly, Gobbler passed on June 26, 2021. Four days prior, she started seeming more uncomfortable. Two days prior, she was acting strangely in the morning and then hiding behind a curtain, next to her litterbox. I called to make an at-home appointment for euthanasia. I made sure she fit in as much treat-eating, moth-chasing, and yard-prowling as she wanted to (which wasn’t much) until it was time. She passed while snuggled up against my leg on her favorite chair, on top of her favorite blanket, with her favorite toy fish next to her. My heart will hurt for an eternity over losing her, but I am so glad to no longer see her breathing so shallowly and hiding. It really does show how much we love them to go through such a difficult process and be there for them through every step, all the way through the end.