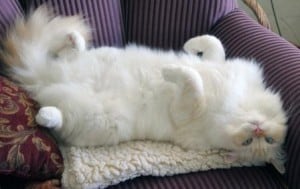 I would like to introduce Gaia. His name means earth. He is not a climber compared to Luna, our other Ragamuffin, who likes high spots. It's a good thing too, because sometimes she climbs just to get out of Gaia’s way! But, he is also a male, and a Guy-ya.

My story really begins with Ebi, our 21-year old female cat, who lost her brother and companion 6 years ago July. She seemed lonely after he died so we got Luna, but only after I had researched cat breeds. I was looking for a cat that was sweet, had a gentle nature, and would get along with an elderly cat. This worked out fine, but after a year, Luna needed a playmate too, one closer to her age. This is when Gaia came into our family. 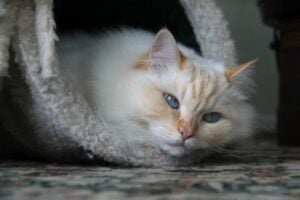 Lounging in the cat tunnel

Gaia was born April, 2008 and is a flame point Ragamuffin, a breed closely related to Ragdolls. We adopted him at 4 months from Indigo Rags in San Jose, California. This April he reached, what I call, his “full flavor bouquet,” or prime at 4-years old. And, what did Gaia want for his birthday? Dried salmon treats? No. In fact, there is no special food or toy he would even consider having. He is not into food. For toys, simple is best: a plastic spring, a string, or newspaper on the carpet. What he does want is play. Play, play, and more play, as well as going out into the apartment hall, a very favorite past time. 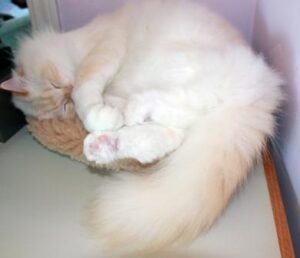 Sleeping in a bed way to small

Gaia’s fur is dense and rabbit-like to the touch. The hair on the back of his legs is extra long and thick and looks as if he is wearing pantaloons. Then there is his tail. It is thick and always wagging.

About 2 year ago I began making cat hair jewelry using Gaia’s hair. It was a fluke I even started doing this. I haven’t had cats with long hair in decades. So when I began in earnest grooming Gaia’s hair, I was amazed how beautiful and soft it felt in my hands! Ordinarily I toss the hair I comb from my cats, but I couldn’t throw his away. As I held his hair in my hands, admiring it’s silkiness, I molding it into a ball, and on impulse threw it to Gaia. He loved it! Ball making began. Each time I groomed him I made a ball or two for him to play with. He loved his customized balls, which he would pick up, toss, and chase around the apartment. Soon, balls accumulated everywhere. One day I placed some in a bowl. As I admired this collection, which reminded me of lovely soft white pearls, I was inspired to make a necklace. How wonderful, I thought, to be reminded of my beautiful cat in the form of a personal adornment.

And now we are business partners. He supplies the hair, I make the product, which is then sold on Etsy.  You can follow us on our blog, I started this blog last November to document my experience making/selling cat hair jewelry as well as to talk about my cats. 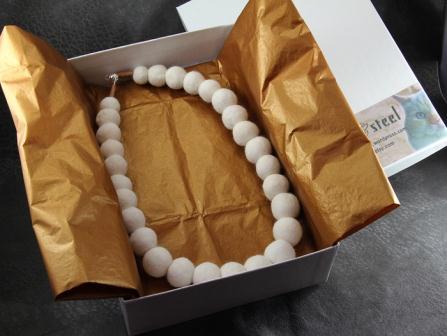 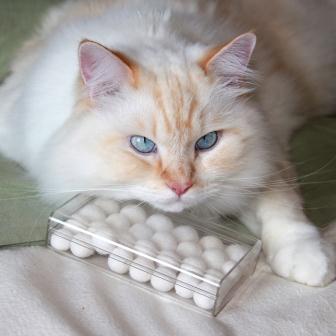 Here he guarding a box of "soft white pearls" 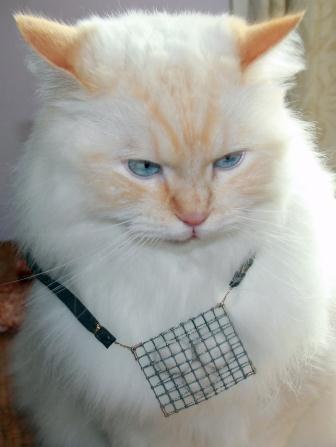 Gaia modeling "Trapped" made for Animal Planet's Must Love Cats 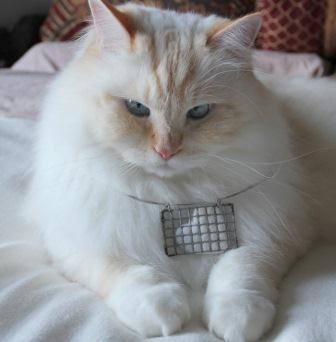