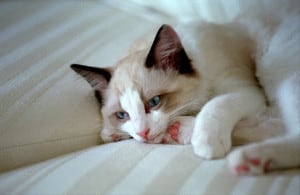 My wife and I don’t have children so Frito was our child.  His life was probably no different than a lot of Ragdolls.  He was loved and taken cared of exceptionally well.  And in turn he gave us much love and great joy – he was family.  I was happy we could provide for him.

He was born in April 1998 in Cedar Crest, New Mexico at the Kachinadolls cattery.  We almost didn’t get Frito.  A man had put a deposit on him before we did.  But he told the breeder that the cat would be indoor/outdoor.  Barbara Bradley, the breeder, believes Ragdolls should be indoor only, told 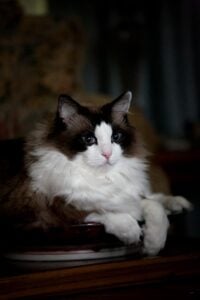 him this kitten isn’t for him and returned his deposit.  And thus we lucked out.  My wife had already planned to visit her family in New Mexico at about the same time Frito would be ready to come home.  They flew back in August 1998 and thus began his long life with us.

Like most kittens he was often high energy and rambunctious.  He was a lot of fun.  I believe kittens make you feel younger – it’s like they transmit some of their high energy to you.  When he arrived he was mostly white and tan – only his ears were seal.  But in a few weeks he darkened dramatically on his way to becoming quite the handsome fellow.  He was a large Ragdoll, but he carried his weight well on his big frame.  My sister once remarked “that’s not a cat – that’s an ottoman!”

As an adult cat not only was he good looking, he was also mild mannered and well behaved.  Our veterinarian loved how calm and relaxed his was.  He never fought or bit her or her vet techs.  Thinking back, he wasn’t much of a biter.  He was way too mellow for that.

After Frito matured into adulthood we settled into a comfortable routine that lasted many years.  That 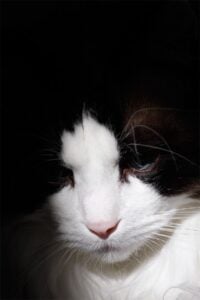 routine changed for the worse this year.

I will focus the remainder of Frito’s story on the last weeks of his life.

Frito had cancer.  When he got cancer, we don’t know because cats are remarkable at hiding symptoms of weakness and disease – it’s something they inherited from their wild ancestors.  Late January 2014 my wife noticed he wasn’t eating much of his breakfast, which was a mixture of bonito flakes, dry salmon cubes and dry kibble.  At first I didn’t think much of it because he ate his dinner as he usually did – with gusto.  Everything else was normal.  Except for one thing … he hadn’t pooped in days.  He was regular – he used to poop once a day (and a big healthy poop at that) so I was concerned he was constipated.  I took him to our local emergency vet on Saturday February 8.  The x-rays showed he wasn’t constipated but a bit of lung in the first x-ray showed white speckling.  Another x-ray was taken of his chest and his lungs were at least 50% white.  In an x-ray normal healthy lungs should show up almost black. 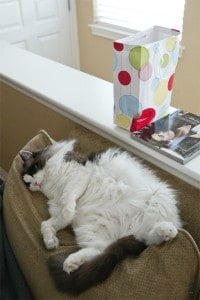 The vet gave me the bad news – it was almost certainly cancer.  She’s seen it before.  My wife and I were devastated.

The original diagnosis was confirmed by his regular vet, Dr. Kim Percival, a few days later.  Her tech weighted him.  16.2 lbs.  The last time she examined him, which was a few months ago, he weighed 21 lbs.

Before he got cancer I hoped Frito would be with us at least another 2-3 years.  I thought it was reasonable given his good health.  However, cancer will often crush your hopes for a longer life for your pet.

Our focus going forward was to make Frito’s remaining time as comfortable as possible.

We gave him meds to reduce the inflammation in his lungs and to increase his appetite.  There were days when he seemed normal, except he barely ate dry food.  Just about every day I graded his health 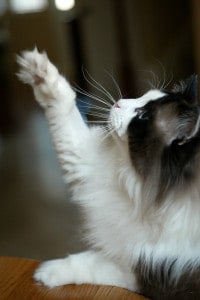 against what I considered normal.  There were days he as 75% of normal and it would dip here and there but he would rebound.  That happened during the first week or so after his diagnoses. Afterwards the percentages started a steady downward trend.

People say your cat will tell you when it’s time to let him go.  All I knew was I wasn’t going to let him suffer just because I wanted him with us as long as possible.  On Friday February 21, I thought his time was up.  He wasn’t eating much.  His breathing had become extremely labored and his eyes constantly watered.  He looked absolutely miserable.  But by the afternoon, he rebounded remarkably well.  His eyes cleared up and his breathing was much improved.  He ate well.  But I also knew his health would continue to trend downward because the good days of normality had long gone.  What he had now were good half days.  And soon those faded away to a few good hours, here and there.  He still drank water, but his appetite dwindled to nil the last week of his life. He was wasting away before our eyes.  I resorted to force feeding him wet food via an eye dropper just to get some nutrients in him. I now realized this was truly the beginning of the end and it weighed heavily on me and my wife. 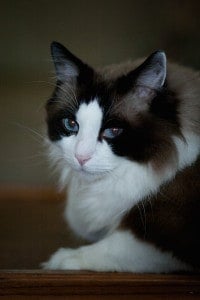 Another bad sign … Frito couldn’t walk six feet without being exhausted.  His lungs simply didn’t have enough capacity.
During his long life he slept on our bed every night until the cancer worsened.  When his breathing became labored and his eyes watered he wanted to be alone, either under my desk or on top of the couch.  But a few days before he passed away he jumped on our bed and slept with us most of the night.  And he did it again the next night.  It was his parting gift to us.

The day before he died, he jumped on the bed one last time.  He did this on his own with me prompting him.  I think he wanted to do it.  But it took everything he had.  He tucked his front paws underneath his body, chest heaving and head down.  He was totally exhausted.  I felt for the poor boy.  It was heartrending.

On his last day he had stopped drinking water.  I tried to give him water using an eye dropper, but he refused.  In addition, his breathing became very rapid and shallow.  I saw how much he was struggling and it was only going to get worse.  Of course he couldn’t tell me how he felt, but I know my 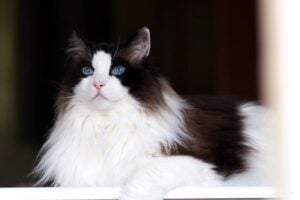 cat.  The finality hit me hard – I knew it was time.  To keep him barely existing in such a sad state just so I could have him around would be cruel.

I got his carrier out.  I opened the garage door before putting him in the carrier.  During the short drive to the vet’s office I talked to him.  I told him many times how much I loved him.  It was a tough drive.

Dr. Percival was wonderfully compassionate to me and Frito.  She placed him on a comfortable blanket. She calmly explained the end of life procedure.  The first injection was to calm him down and the second injection was to stop his heart.  She talked to him soothingly as she performed the procedure.  His bright blue eyes remained opened after his heart stopped.  I put my ear 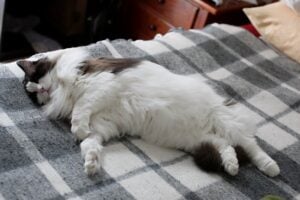 to his chest – no heartbeat – no breath.  I kissed him on his head and told him again how much I loved him.  She wrapped him up and carried him away.  Then it hit me like a ton of bricks.  Frito’s gone.

It’s been a few weeks since Frito passed away.  He was a constant in our lives and to no longer have him physically here is at times saddening.  But life goes on and we have an opportunity to bring another Ragdoll into our lives.  His name is Milo.  He’ll be 13 weeks old by the time I bring him here to his new home.  It was important for us to have another Ragdoll as a connection to Frito, but it was just as important that he isn’t a replica – a stand-in.  Frito was a seal bicolor.  Milo is a blue mitted.  Milo is not Frito.  Milo is his own cat.  I hope to share Milo’s story soon. 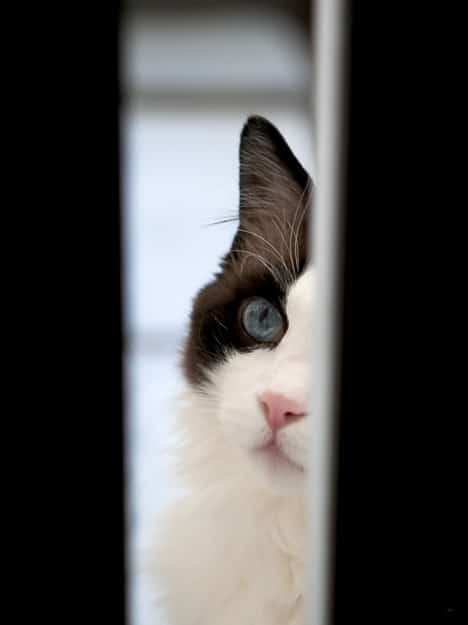 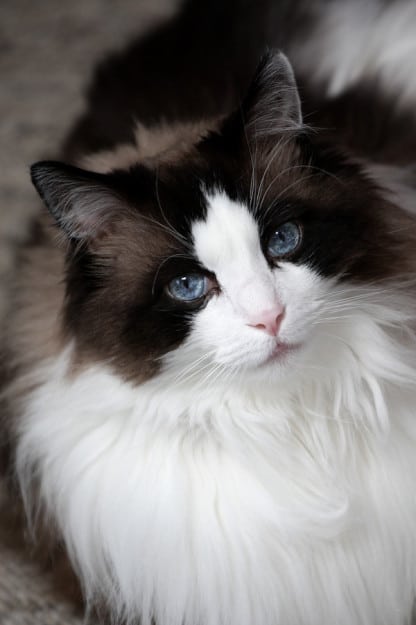 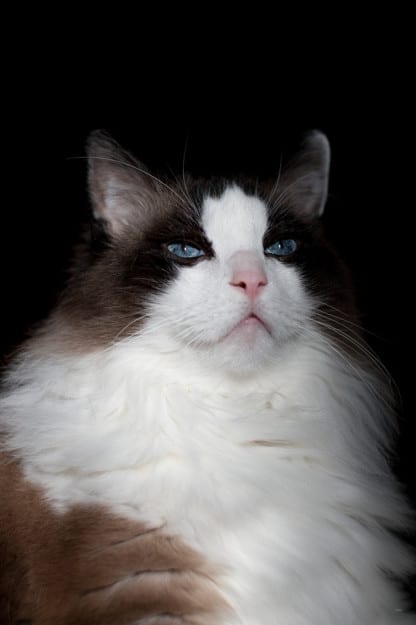 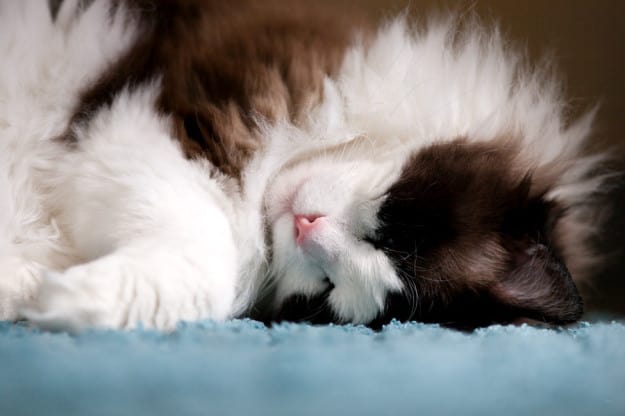 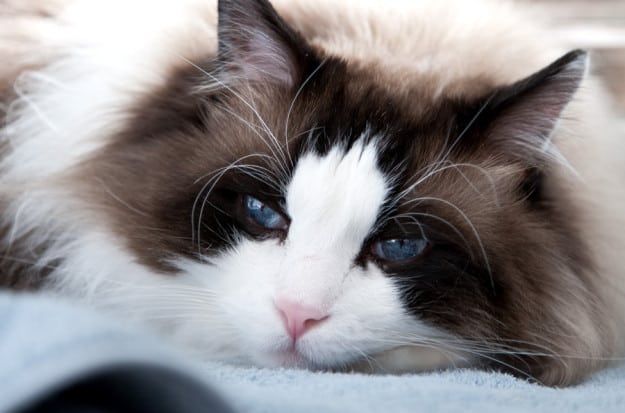 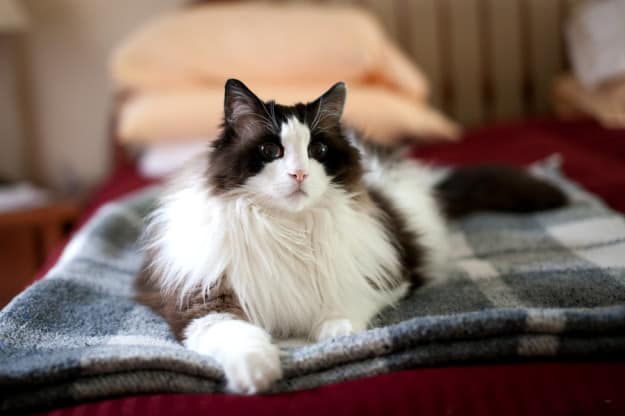