Freddy - Ragdoll of the Week 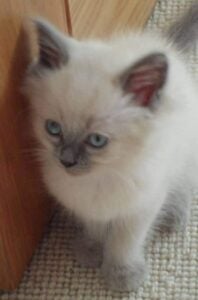 Freddy came into our lives in September 2014 from a breeder (more to follow on that below) as a 7 week (yes, that’s right 7 week) kitten.

So, let’s start at the beginning with the breeder – a one bed flat with hygiene to be desired, housing her 2 adult cats plus the litter of 5.

We were initially shocked by the conditions the cats were being kept in, but the overall experience was certainly not desirable.

So, firstly the breeder couldn’t tell the difference between her litter of 5 which really were all very different 2 seal boys of different sizes, 1 blue boy, 1 chocolate boy and 1 bi colour girl so really should not have been hard but anyway each one had nail varnish in its fur so she could separate them!

Other concerns as follows; chain smoking over the kittens, conflicting dates of birth for the litter, being fed the cheapest/low quality supermarket brand there was available (also fed to the mother whilst carrying) and stating that the mother was bored of them at 7 weeks old so we could just take him. 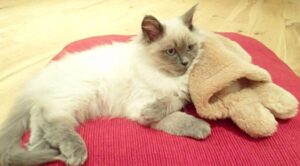 Now I know that you should never buy a kitten because you feel sorry for it and should always go to a reputable breeder but being the softy that I am I just had to have him and knew I could offer him a better home than the next one to view him.

Anyway, he settled in really very well (apart from being covered in fleas) but at 11 weeks old we noticed he had a really high temperature, permanently sleeping and loss of appetite so we took him to the vets and they said his temperature was 39.7 and he needed fluids straight away so was on an IV catheter, was given medication and advised to monitor him overnight. 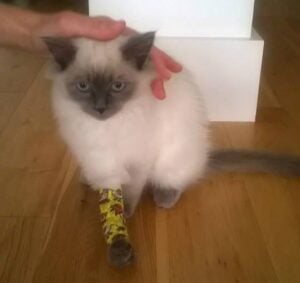 He wasn’t any better so they next day he went back and his temperature had increased even after the antibiotics and was now at 39.9

From then on, he just got worse, he was very sick over the next few weeks, his temperature was over 40 degrees, they x-rayed him and tested for everything they could but could not find what was wrong with him (the only diagnosis they could definitely provide was that he had chronic pharyngitis) which was so frustrating for all parties but all he could confirm was it was very likely he caught whatever he had from his mother.

His temperature just kept increasing even though they were doing everything they could do bring it down, he was still sleeping all day and night, losing weight etc and the vet was left with no other options and gave him his last injection he could as nothing was working, he tried to reassure us by saying some kittens just bounce back but at such a young age (now 14 weeks) we couldn’t see this and feared the worse. 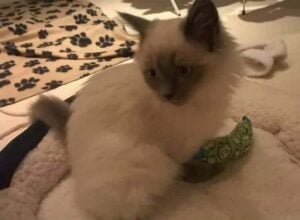 Only at this point when we thought we would lose him did we start to really realise the importance of buying from a reputable breeder and felt so angry with the lady we bought him from and couldn’t believe she was bringing her own cats up in such conditions, let alone to breed them.
Anyway, the day after the final antibiotic was given we had some hope as he was a little perkier and awake, we took him back to the vets who gave us the good news that his temp was on the way down, we were delighted, however still mindful that he was still poorly and not fully recovered by any means.

He did however make a full recovery within a few days and we couldn’t believe our luck. 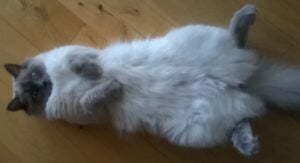 Since then it has been no means easy though, he has still been poorly on and off, he has a regular cough (and it’s not hairballs) and dry gagging, vomits frequently and the poor thing can’t even purr – if he tries to he either gags or coughs.

The vet has since tested for polyps but again, nothing to be found down his throat so we are still none the wiser of what is wrong with him. 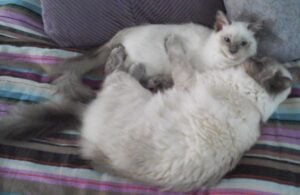 What we do know is that he suffers with terrible stress, I have had family members look after him when I have gone away for a day or a few days and he goes on hunger strike and won’t eat (I even had to put him in a cattery for 3 days recently for the first time and he lost 300g due to not eating).

My mum looked after him for 5 days and when I came back and tried to feed him he actually hissed at his food for a whole week!
My mum then came just to visit for a weekend and he threw up, my nephew (who to be fair is a very hyperactive 5 year old) popped in for half an hour once and even that made him throw up due to not being used to a noisy child. 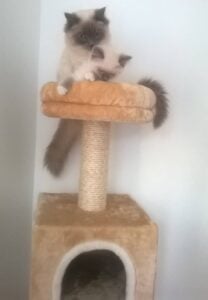 I think he is this way as I work from home so he is with me 24/7 and then has terrible separation anxiety if I leave him.

But, on with the positives and less of the doom and gloom….you all know what ragdolls are like so I’m not going to talk about the clichés and traits as he has them all, he is simply lovely and I cannot believe such a lovely boy has had such a tough start in life and can only hope he spends many more years with us.

Even though we are at home with him day and night we were always reading that 2 cats are better than one so thought we would buy him a friend from a reputable breeder and after looking for a few months we found not only the perfect breeder but also the perfect kitten to become his ‘brother’ – Finlay, who is now almost 6 months old.

We had it planned to keep the 2 apart for a few days so that Freddy could get used to a new arrival, however Freddy wanted to know what was behind the closed door immediately so we thought we would introduce them straight away and after a few hisses from Fred and a few kisses from Finn they began to cuddle and Freddy couldn’t stop grooming him and playing. This was within an hour of meeting, it was so amazing.

The past 3 months they have been inseparable, you will never find one without the other and they are the best of friends which hopefully is apparent in some of the photos.

We have also been feeding a homeless cat for about 6 months, never letting him in for fear it would disrupt Freddy but where he took to Finlay so well we opened our doors to the stray too a couple of weeks ago and he has been welcomed by both Freddy and Finlay, all of our friends can’t believe that 3 male cats can get along so well.