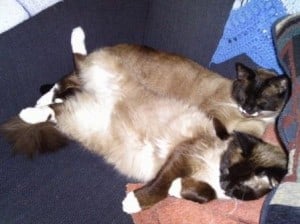 Frankie and Johnny (nammed for the song) are two brothers, a ragdoll and siamese mix that lost their human companion and ended up in a shelter.

In March of this year, we lost our Siamese cat, Alley, to chronic renal failure. Alley was an old, skinny kitty who just showed up on our porch one day. He was an affectionate, loving and vocal cat. We learned a lot in our short time with him, about how much giving a second chance is worth. He loved up until the last second. 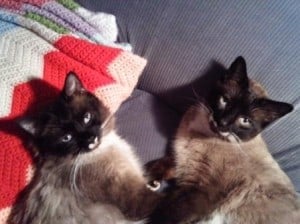 We started looking to the local shelters for Siamese cats. We wanted to give a cat another chance at life, love and a family.

This is when we came across Frankie and Bullet (Johnny) at our local Humane Society. When we asked about siamese cats, we were told that there were no siamese cats but a pair of "siamese like" cats ... ragdoll.

At first we were a little worried about a 9 pound and 13 cat. 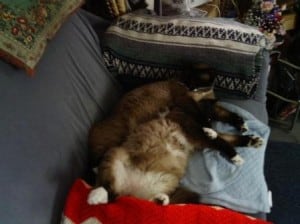 The visitation session in the humane society went great; we were capivated by Frankie's big blue eyes and Johnny's affection. At the time, we wanted only one but were informed that they couldn't be separated becuase they were together since birth and their owner recently died. This is when we really felt a connection to the cats. 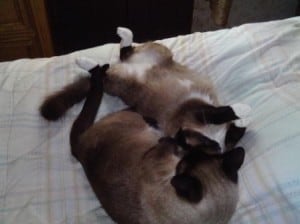 Frankie is 100% Ragdoll cat and likes to be picked up. He goes floppy and enjoys being held on his back and getting his belly rubbed. For fun he tries on clothes ... or, rather, drags them from a bedroom and then around the house showing off his prize, playing with strings and chasing toys around. When he's playing, Frankie jumps and runs around like a kitten.

Curiosity is Frankie's game. Mr Perkytail, as we call him, walks around with his tail straight up when he is on the hunt for, well, whatever he hunts. If there's a crash around the house, we can be sure that Frankie found something new. He's a day nuzzler ... pick him up any time of the day and he will love you. 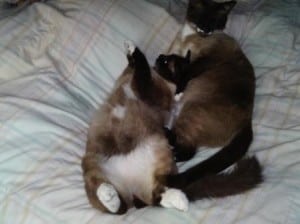 Johnny is more Siamese but there's still ragdoll. I wake up to his tilde blaze every morning as he pulls the blanket off and nuzzles, licks and kneads me to consciousness. He plays fetch ... a lot. Throw the ball and he'll bring it back, meow and drop it at your feet. Sometimes he has the urge to play at 3 in the morning and makes it known by yowling and rattling his ball around.

We are certainly glad that we took in Frankie and Johnny! They enjoy us as much as we enjoy them.  Share your floppy cats stories with other readers. 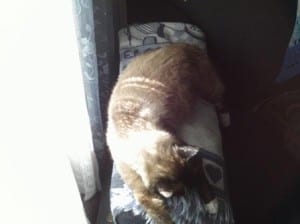 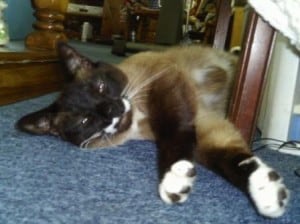