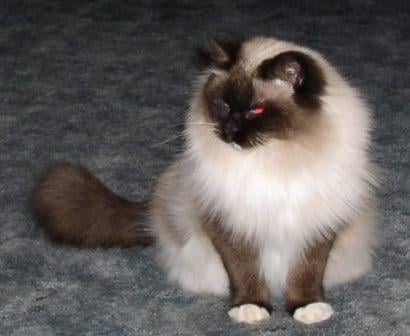 Here is the story about Flora, a Seal Mitted Ragdoll Cat:

“After I had to put my oldest cat to sleep (Jan. 2008), my husband and I decided to look into finding a new cat to join our house (we have two other cats, brother & sis who are almost 14 yrs; had them since birth). We saw a cat breed show on Animal Planet, and we liked what we saw on the Ragdoll breed. My husband’s not really a cat person, but he
thought that he’d like their personality, so I thought why not!

I started combing the internet for Ragdolls…I looked on the Petfinder website (I thought adoption would be our best route), but I didn’t see any that were close to us. Then I searched on kijiji.com, and saw some breeders ads, but I really didn’t want to spend up to $600 on a kitten. I finally found a bunch of Ragdoll registry clubs, and so I found a list of breeders in our state, sent out some inquiries, and hit pay dirt!

I spoke with Helen of Calliope Cat, a breeder getting out of the business in Windsor, CO, and she said she had a 6 year old female that she wanted to rehome. I thought the cat would be perfect for us, even before seeing her. So, I made the 12 hour round trip on a Thursday, and brought a beautiful, registered cat home with me. We’re still trying to come up with a good name for her, as I’m not partial to her registered name of “Flora”. We are just floored at her behavior, she’s SO loving and laid back. It didn’t take her long at all to make herself at home, and start to trust us. Flora acts like a queen, and already lounges around on the couches, following both of us around the house. My other two cats are acclimating to her–Butter Boy has done some sniffing noses, but Kalica (mama’s girl!) is still in the hissing stage. But, happy to say, there have been no fights or chasing between the cats. Yay!!

I’m very happy to have this new cat in her household. Not only is she beautiful (I finally was able to groom all of the mats out of her coat), but she’s a lover as well (and my husband is in love! Finally, a cat that likes him!). I’ll look forward to many years of tranquility with this cat. Now if I can just find my other dream cat, an Abyssinian, my perfect cat family will be complete!”

Tell Floppycats.com about your cat’s story! Feature your cat like Flora is featured!