I want to begin with a little background as to how I came to share my home with my Floppycat. I moved into my current home 4.5 years ago. I’m 71 and have a 14 year old female cat and 2 small dogs. We were a happy little family. Then a series of events began to transform it all.

Some neighbors across the street from me had a stray cat that they had been feeding for years, long before I moved here. They moved and left the cat to fend for himself. Of course, he believed that was his home but no one was there to feed him. I began leaving food in his driveway for him and gradually moving it closer to my house. Finally, he came to live on my front porch, as he would not come in the house. He had plenty of food and a very cushy, heated bed. I had him vetted at which time the vet said he had a very severe heart murmur. He died a year after I gave him a home.

Two months later another stray, whom I had seen around for the 4 years I had been here, came to my door looking for the food that was no longer on the porch after the first stray died. I began feeding him, had him vetted and he now thinks he owns the entire house, inside and out. I guess I’m his now.

Nearly a year to the day, in mid November, 2017, I began noticing that the food I left in the garage for this stray (who chose to spend some nights out on the town) was disappearing at an unusual rate. Twice I had gone into the garage and had seen a very fluffy, striped tail exiting through the cat door. Believing the culprit to be a raccoon, I called my pest people and they set 2 traps in the garage. Sure enough, the next morning I had captured the bandit. It turned out to be a big, fluffy, blue-eyed cat. Assuming it was a neighborhood cat out doing some nightly marauding, I set her free and told her to go home. The food kept disappearing. A few nights later, I saw the cat on my front porch. I took her a bowl of food which she inhaled. I took her another which also was quickly eaten. I then realized that this was not a neighbor cat but that she was lost, hungry, cold and scared. 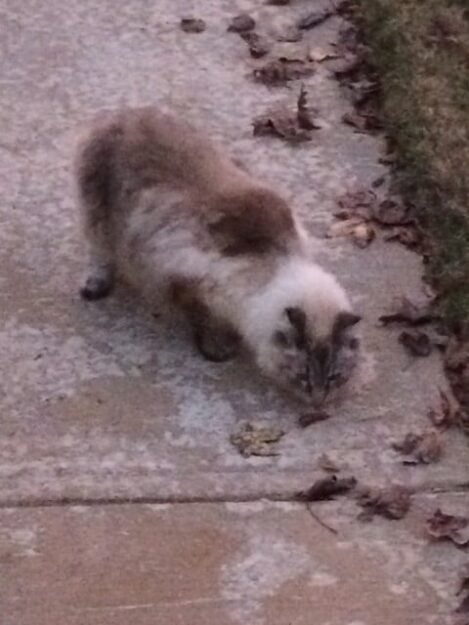 So scared and hungry!

Now, it’s a week before Thanksgiving. I planned to drive 5 hours to my sister’s house for the holiday taking the 2 dogs with me. My old cat was booked into a kennel and the stray had access to the garage and a neighbor would make sure he had food. That left this new fluffy cat. What to do about her. I called 5 boarding kennels and, of course, they were all full for the holiday. I found a neighbor who agreed to come in twice a day to take care of her. I planned to find her owners when I returned.

After I got home I took kitty to the vet to check for a chip. She had one! Yay! I knew her name and her age but both phone numbers on her chip were no longer in service. No ads in the paper, no inquiries at the Humane Society or at Animal Control. I asked all my friends if they would take her; I emailed 2 breeders and got no response. I didn’t know what to do because I felt I just couldn’t take on another pet. 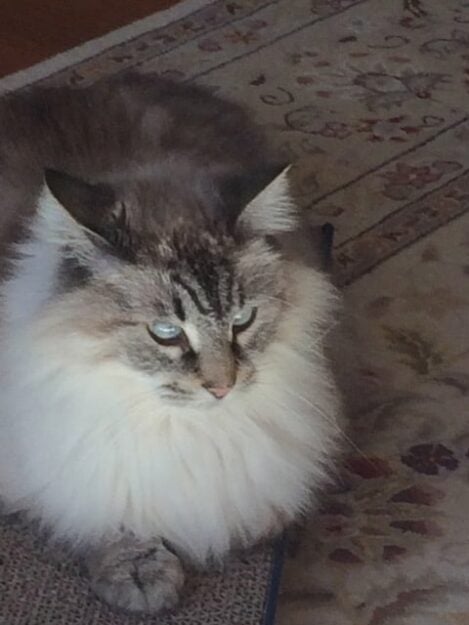 A warm home and plenty to eat.

Now, 5 months later, Floppycat has had all her shots, a new name and a new home. I believe that she had never been with other pets as she seemed frightened of all the others. She lashed out at the dogs if they got too close and she (still) does NOT like my female cat. She’s better with the dogs, likes the other stray and still would rather the female cat just went away. I have accepted that she is now part of my not so little family.

I have attached photos of Floppycat beginning with the one I took of the night I found her on the porch looking for food. She loves going out into the yard (supervised - she tried to get over the 5’ chainlink fence once) and looking around. I don’t know what her former home was like so I don’t fully understand some of her behaviors. I thought there was something wrong with her at first when I picked her up and she seemed to melt. I also found it odd that she followed me around like a dog. I know now that those behaviors are breed specific. 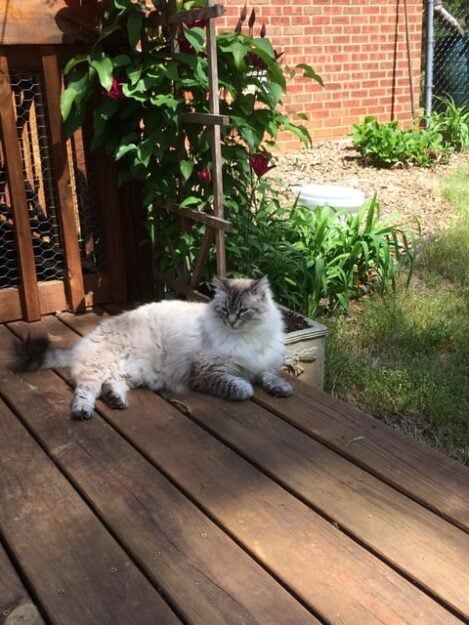 No more hunger and fear. 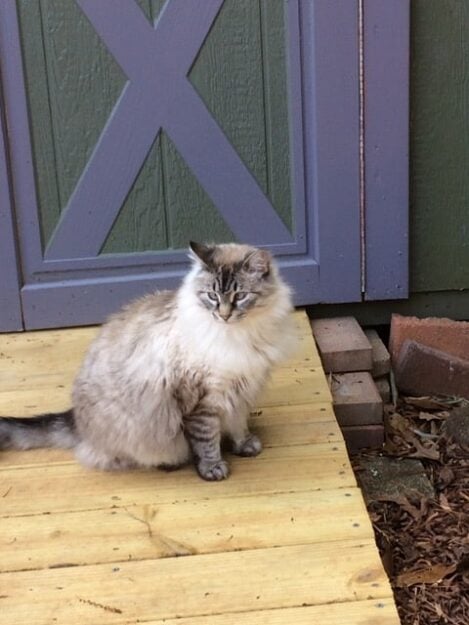 I think we will all be a larger happy family now that Floppycat is adjusting to the rest of us. 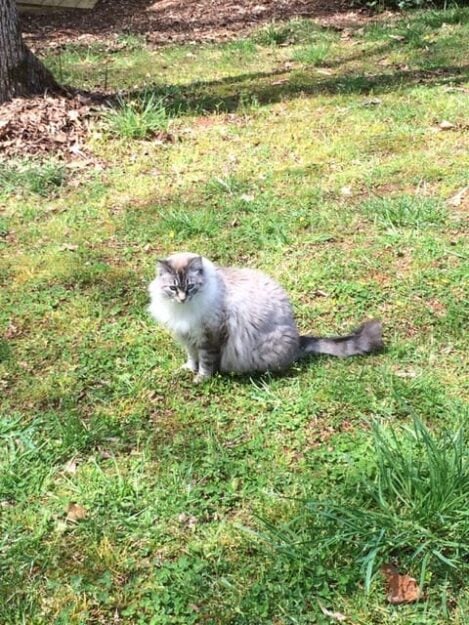