Finley - Ragdoll Kitten of the Month 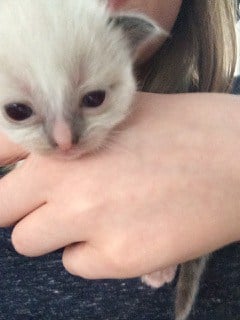 I have been a cat lover for most of my life really, it all started as cats just being cute, to being fascinated with their behaviour, and eventually deciding I wanted one for myself. I watched a lot of cat videos on YouTube, and shows on animal planet (My Cat From Hell, Cats 101). Since I’m eighteen, and still live with my parents, I’d already decided it’d have to wait until I moved out when I was about 14. Just because I made that decision though, didn’t mean I wasn’t going to research cats and everything about them, and through Cats 101, I decided the Ragdoll would be the perfect breed for me. 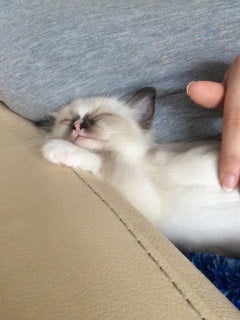 Last year, the kitty fever really hit me; I wanted a cat, and I wanted one right now. This meant I had to convince my parents; something I thought impossible, but because I really wanted it to work out, I did everything I possibly could, and tracked my progress on a blog. After two months, I had my mom convinced, two months later, my dad finally said yes, and I started contacting the breeders I’d already researched the same day. To no success… But then my mom swooped in and saved the day; she’d found a breeder a mere 15 minutes away from us, who had a ten day old litter of fuzzy babies.

I met my baby the day afterwards, and immediately put a down payment on him; I was in love, and I can proudly say, I still am, and I know I always will be. If you live in the Netherlands, and you’re looking for a kitten, I would definitely recommend Cattery From Shelby’s Meandros to you, because they couldn’t of done a better job taking care of my boy. They are so kind and compassionate, and let me visit him every week; a truly amazing experience, I got to see him, hold him and bond with him since he was the tiniest baby bean at 11 days old.

My not so little Finley Bean was born on the 22nd of April 2015, which means that if this gets published, he’ll turn one this month! His second name is pretty self explanatory to me; he was so, so tiny when I first saw him, and looked just like a bean. I have no idea where I found the name Finley, but I knew it was just right the moment I saw it. He is truly the sweetest cat I know, although I might be (probably am) biased; he flops with the best of them, purrs like a motorboat, and takes even more naps than I do. 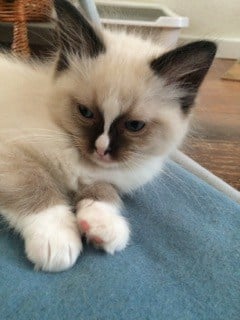 Fin is such a mellow kitty; I can do almost anything with him, although bathing is still, and probably always will be out of the question. Like any kitten though, he has his hyper moments; runs around the house, jumps up and off the bed, airplane ears included. He has an obsession with feathers, fuzzy pompoms and feet; licks them, bites them, lays on them and chases them around the house when he can.

If you want to know more about Fin, or see more of him, we have Instagram (@finleybean), a blog (finleybean.com), a Facebook page (Finley Bean) and a YouTube channel (Also Finley Bean), although the last one barely gets used. 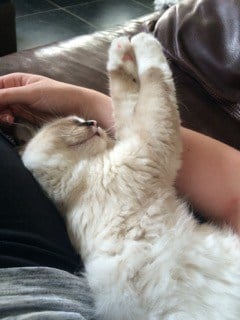 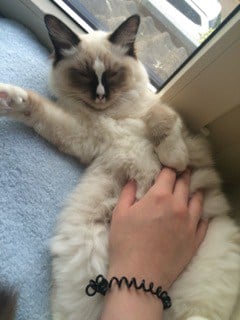 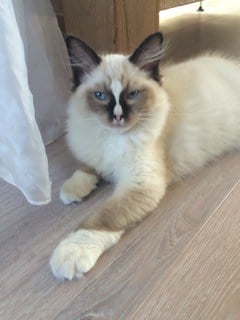 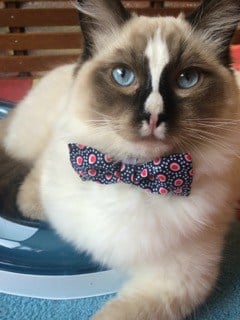 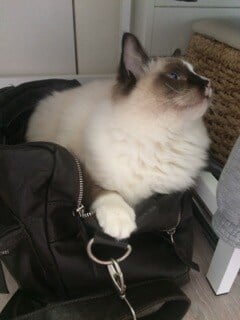