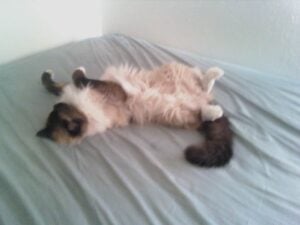 Back in March 2009 I was looking on Craigslist.org for a furry friend for my kids. I came across an add saying, "free cat to good home 6yrs old", I opened up the ad thinking even though he is a little older we can work with it, I scroll to the bottom, to see the most gorgeous cat I had ever seen! He was laying in a sink which made me just laugh. He had beautiful blue eyes, dark face with a little white goatee, lighter body, and dark tail. So I went to the old owners house to check this adorable cat out. He was just perfect! I couldn't even describe the connection we had. He purred so loud I swore he had a frog in his throat lol. When we brought him back to my apartment, where it took him a few days to come around he acted like a kitten (the previous owners had him locked in a bathroom for a year straight) so being able to run around free was like "the life" for him. The old owners had called him meow meow and that just didn't suit him at all. 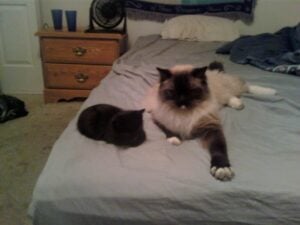 My kid's father was saying how he looked just like a cat he had when he was little named, Fang, well after he said that name my son just blurted out FANG! There it was his name be came Fang! He tolerated absolutely everything, my son would step on him trying to get on the couch, chase him, and sometimes end up pulling his hair and he would lift his head as if he was just in heaven. Then in Dec. 2009 we moved into a house, as soon as Fang got used to it, you would have actually thought he was in heaven, laying every where, running around like crazy and happy that he could just sit on the floor and look out side with out having to jump into a window. 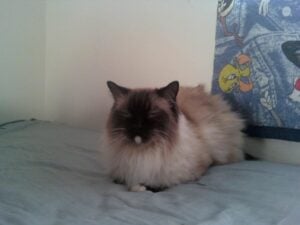 When Jan. 2010 came around Fang started to notice something was changing and it wasn't good. Me and my kid's father had split up, and he moved out. Fang saw how upset I was and that I was just not doing so great, and every night he would come in my room head butt me and start licking my hand non stop till I smiled and giggled at him. He would lay down and roll over just waiting for you to scratch his stomach as if he was a dog. He layed in the most odd positions. I really just couldn't explain how much he was there for me through everything that was going on. He was awesome! Very well behaved and well trained.

Sadly Oct. 30, 2010 Fang had passed away. I had some friends over and one had went out back to smoke a cigarette and Fang snuck out and my friend didn't even know. He came back in and we continued listening to music. About 30min later another friend went out to smoke and looked to the side of the house to see Fang laying on the ground and he shouted for all my friends to go out but I had to stay in. One friend comes in to tell me it looks like a fox had gotten to Fang. I was in shock shouting over and over "it's not true, don't tell me that, no no no!" Everything just went blank, sitting there realizing I had just lost my best friend. It has only been a couple days since it happened and I am no where near ok yet. I knew he was a great cat from start but the second he left me is when I truly realized what all he did for me. He was an amazing cat and I will truly never forget him.