Elmo - Ragdoll of the Week 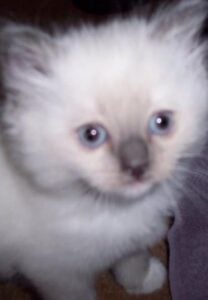 Ten years ago I lived in Massachusetts (for 2 years) when my dog passed away unexpectedly. I am such an animal lover that it broke my heart not having a pet around the house. My husband and I had 3 boys aged 9, 3 & 1 and was worried about getting a fur baby that would fit right into our family. A friend (who later became a great friend) invited me to her house for a visit. There I discovered Rocky & Roxanne… These 2 Ragdoll cats were just so sweet that I ‘threatened’ to sneak them out in my purse… The decision was made. I wanted a Ragdoll and went looking for one to adopt. There wasn’t one single Ragdoll anywhere near us so we searched and found a great breeder, who has since retired from breeding. We went to see her 5 week old kittens. She had two little ones left that did not have a deposit on them. One male & one female. I went in wanting a female since I was the only female at my house, but things changed. The female was very skittish of 3 loud excited boys. The male on the other hand was very curious and wanted to know more about all of us. Seven weeks later we picked up our new family member and he was named Elmo… My 1-year-old was insistent. He and my mother came up with it. So Elmo it was. He came into the house like he owned it. He was so good with the kids and they adored the little fuzz ball… The more attention the better. He never was a snuggler or lap cat but loved to be near us and any company that came by to visit. 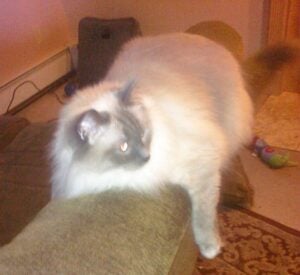 Fast forward 10 years and (Elmo just had his 10th birthday on March 31st) you will see that Elmo still owns the house even though we moved to Virginia. This 18-pound cat loves to greet guests and get tummy rubs. We are convinced that he is a dog in cat clothing. Although my oldest son calls him Garfield because he loves his naps and nothing really excites him he still keeps tabs on his 2 legged brothers. No food goes unnoticed. Elmo now has two other kitty brothers that he bunks with in our room, and even though they are not Ragdolls he treats them okay as long as they do not pester him. When that happens he will slap them on top of the head with his paw two or three times to remind them that he is in charge. He sleeps beside me every night and sometimes if he is in a good mood he will let his four legged brothers sleep at the bottom of the bed.

I just could not imagine this feline not being in our lives. He has quite a presence and hopefully we will have many more years of tummy rubs ahead of us because here it is Elmo’s world, and we just live in it. 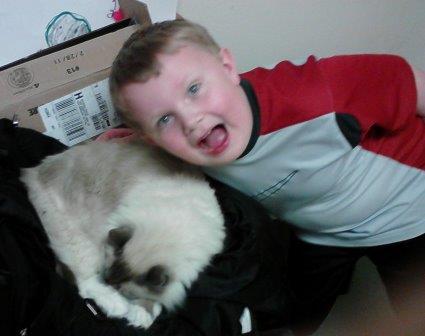 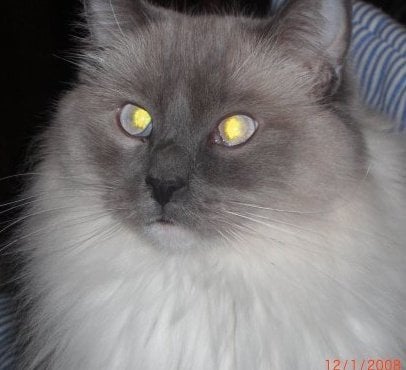 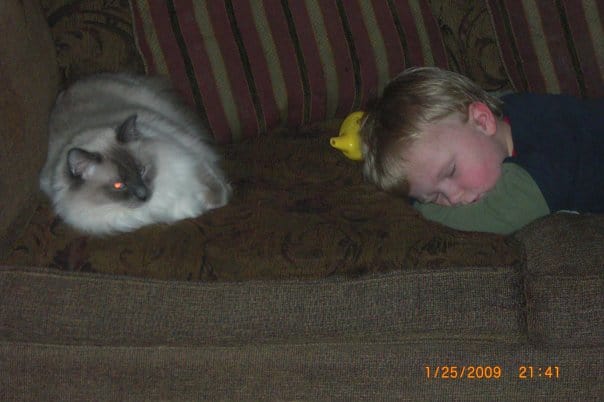