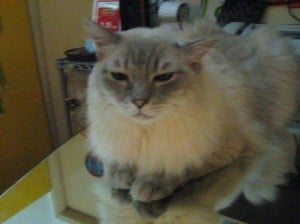 My name is Byron. I am from Hong Kong, but was born in the Bay Area. My first cat, Min Min, was a rescue that was considered a Siamese mix when we first adopted him. When my older brother and dad brought him home my mom smelled Min Min and went ballistic. My mom hates cats and threw Min Min in the back of the car and drove it 5 blocks before dumping him off. The next morning Min Min, still only a 3 month old 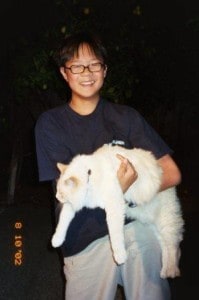 kitten, found its way to our doorstep. He was ours. Min Min soon outgrew his name, which was a nod to its originally small size, and grew long fur and grew to 17 pounds. He died at the age of 15.5 from tongue cancer. Min Min was how I grew to love Ragdolls.

Duoduo (多多) the cat is the only Ragdoll at the Cat Store in Hong Kong. For those of you not familiar, a cat cafe is a cafe where 10 cats run around while you drink coffee. The concept was started by the owner Cynthia Leung who wanted people who were not allowed to own pets in the high rises of Hong Kong to have a place to play and go on dates in the company of cats.

This white cat is named Duoduo, which 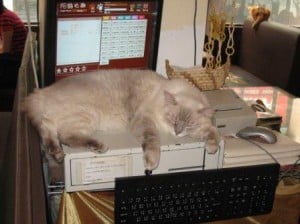 translates to "More more" in Chinese. Despite his name Duoduo is not heavy and is mostly fluff. Duoduo was born in January 2003 and was bought by a girl. Later on the girl decided she couldn't take care of him so she dumped him off at the cafe. Once there, Duoduo became the darling of the cafe due to his docile nature. Later on in 2006 the girl came back and said she wanted Duoduo back. Cynthia gave Duoduo back only for 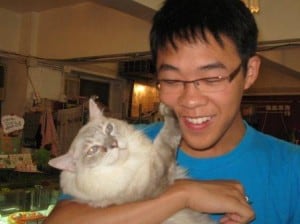 the girl's mother to force Duoduo out of the house. A few months later Cynthia found out that Duoduo was somewhere in the wild on a mountain. Cynthia was heartbroken but could not find the time to find him. Later on a concerned boy, a cafe regular, went to the mountains to try and find Duoduo. He spoke to some old grannies, who recognized the description of a "great white cat". Finally the boy spoke to one granny who fed wild cats and said she had fed a cat that was a ragdoll. 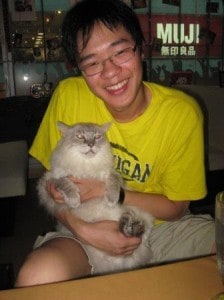 Duoduo was found and was returned to the Car Store where he still resides. Cynthia vowed never to let anyone take Duoduo away for the Cat Store is his home.

Duoduo is a blue point ragdoll that weighs around 18 pounds. I first met Duoduo in 2005 and loved how it reminded me of Min Min. Unlike most other cats at the cafe he appears to have a personality; when people interact with other cats, some cats scratch, some cats hiss, some just walk away; Duoduo will either give you a mild, worried or angry expression. If you see any videos of cat cafes in Hong Kong and spot a large white cat its probably him.

The first photo is Min Min. The remainder are of Duoduo.