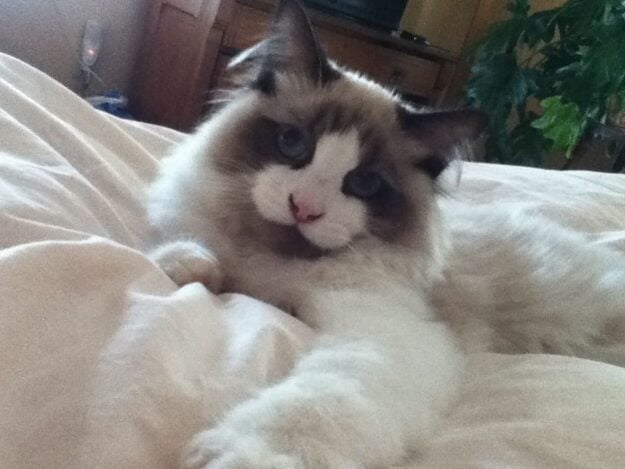 One day, four years ago, I was visiting my Mom at her house. I picked up her local newspaper from the coffee table & found an ad for rag doll kittens in the next town over from hers.

I had become obsessed with rag doll cats around that time & had been learning everything I could about them online. After a quick call to the breeder we drove over to see the kittens. I was immediately attracted to a female rag doll kitten. After explaining to the breeder that my husband really wanted a male cat who would hopefully be a lap cat she steered me over to a younger kitten who was male whom she said was a real cuddler. He was busily playing with a ping pong ball that rolled around while trapped inside a plastic ring. He was tiny & sweet with really nice markings & I put a deposit on him right then & there. The next day my husband & I drove back so he could meet the kitten. I was nervous about it as he wasn't as keen as I to add to our fur family. Well, he fell in love & several weeks later we found ourselves home with our new arrival. It wasn't long before he & the two other cats (a snowshoe Siamese & her grown long haired snowshoe Siamese daughter) were one big happy family. We waited to see what his "purrsonality" would be before deciding on a name for him. It soon became evident that he was full of mischief. He loved getting into the paper recycle bag to take a nap, after turning it over & pawing the contents out all over the floor! 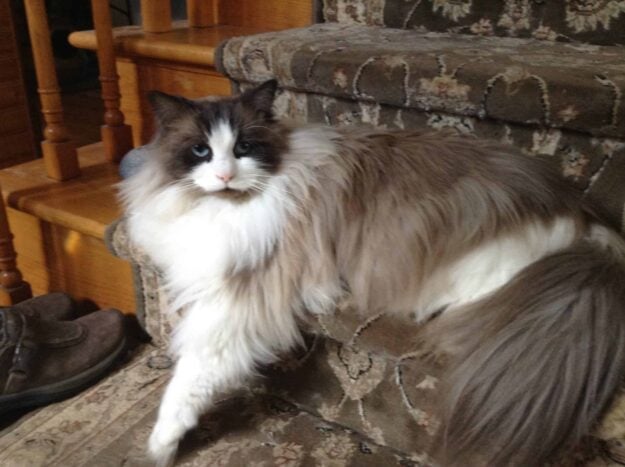 We settled on Dickens for a name. 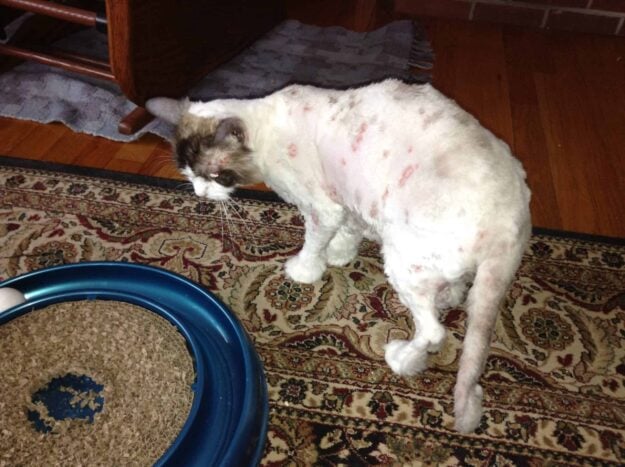 When Dickens was about a year old he started having issues with sores on his body. Our vet gave us some salve & some shampoo with instructions on use. Dickens's fur was so long it was difficult to see where the sores were to apply the salve. We decided to have the vet tech shave him to make it easier to treat his sores. We still weren't sure what was causing his condition at that time. Once shaved, we were horrified at the number of sores/lesions on his body & even on his tail! Our vet recommended seeing a dermatologist. It was at least an hour drive away to her office but we made an appointment & drove there. The dermatologist diagnosed pemphigus folliaceus and prescribed steroids & a cyclosporin called Atopica. She was wonderful to us all & Dickens began to recover. The dermatologist made herself available to us via email whenever we needed her & with her help we were able to eventually wean Dickens from the steroid & find the lowest dose of Atopica required to keep further outbreaks from happening. I am forever grateful to her. The Atopica is in a liquid form & very bitter, or so I'm told. Giving it to Dickens was difficult as he would run & hide when he saw us prepare it. I solved this by ordering gel capsules online and filling them with his med. He is such a good pill taker now that he doesn't have to taste it. 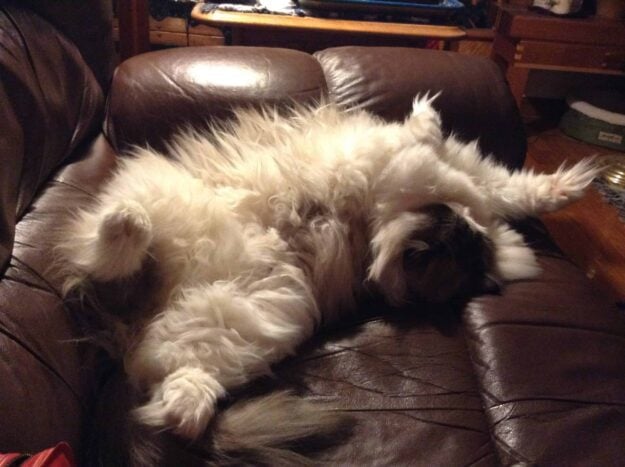 Rag dolls are such unique cats yet share many of the same traits. Dickens loves to greet us at the door when we come home. He even runs to the front door when he hears the doorbell to see who it is. He loved our mail lady & would "high five" her with his paw when she put her hand down to him. And he HAS to join me every time I'm in the bathroom, for some reason. Even if it's in the middle of the night! I think he considers it HIS job! I even had to put a note inside the lid of the toilet telling visitors to put the lid down when finished as Dickens likes to play in the water. His fascination with water began as a kitten. He would join my husband in the stand up shower stall in the morning. The first time I heard him yell "Get out of here" to Dickens I was still in bed & had no idea WHO he was yelling at. He still will paw all the water out of the water bowl onto the floor occasionally. I can even hear the splashing from the other room. And he likes to eat his dry food by picking up each nugget in his paw & bringing it to his mouth. His favorite position is on his back with feet up in the air, corkscrewed slightly. 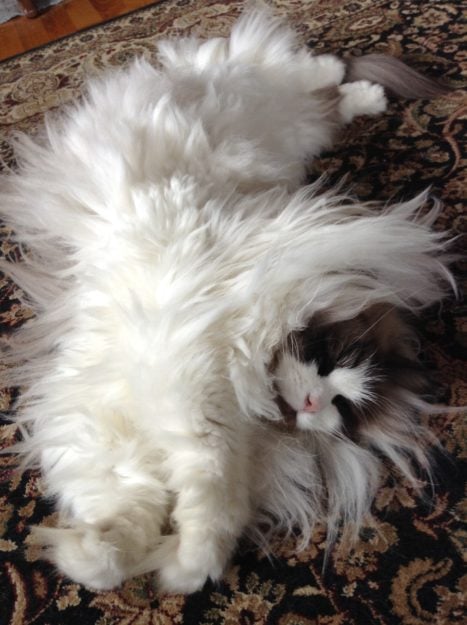 Lately, I discovered that he is fascinated by a red laser light. He'll chase it round & round and try to nip it & catch it. He even knows that the red spot "lives" in the little metal tube & when he sees me pick it up or hears the little chain on it rattle he comes running to play. Hilarious! The other two cats look at him like he's crazy for falling for such an obvious trick. 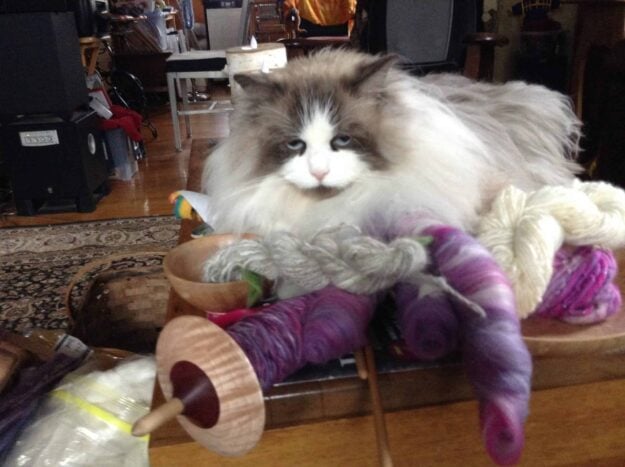 I began spinning fiber into yarn a few years ago & was obsessed with spinning every kind of fiber known to man. Wool, angora, alpaca, cotton, tencel, seacell, rose fiber, you name it. Naturally, Dickens's fur attracted me. I started saving his fur after his brushings, which he HATES, by the way. I don't know if this is because of sensitive skin issues from the pemphigus or not. The other two cats LOVE being brushed & will come to me when they see me pick their brush up. When I had a good amount of his fur saved I spun it into yarn. I have to say, it is the softest, most beautiful yarn. I set the precious skein aside to one day spin into mittens. I'm told that cat & dog fur is very warm and it sure is soft like angora. Dickens seemed to know that the yarn was "his" & would sit on the coffee table next to his skein of yarn, just keeping it company. (see picture, his is the white/beige skein of yarn) 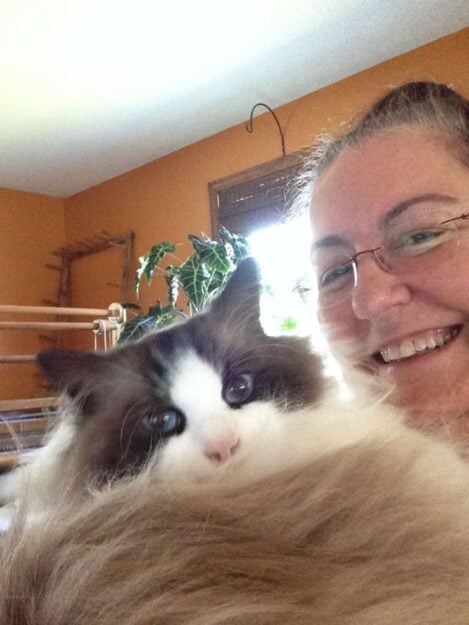 Oh, and he is a wonderful cuddler. Often while I'm at the computer he comes over & paws on my leg. I put my hands down to him & say "Up?" & he stretches his front paws up to me to be picked up & put on my shoulder to be snuggled. It totally melts my heart! His favorite place to nap is between my husband's knees in the recliner. I can't say enough about Dickens and how much joy he's brought into all of our lives. 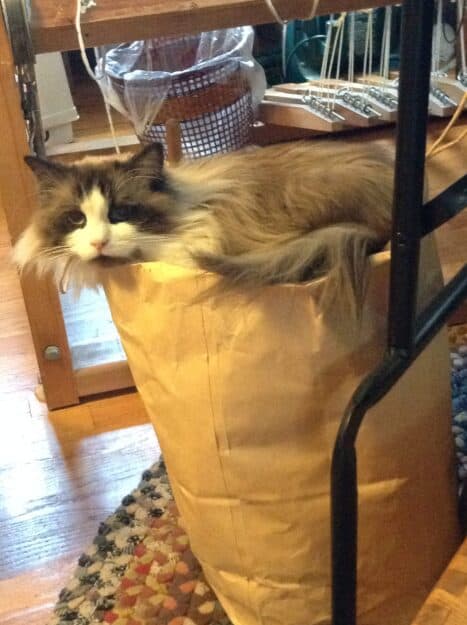