Denali – Ragdoll of the Week 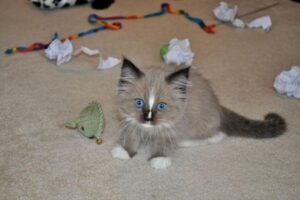 For some reason, all the cats in my life (until now!) have been females. When my old calico girl passed in 2006, I went in search of a pair (girl and boy) of Ragdoll kittens. (See Stormy’s story on March 7) I ended up bringing home two boys who were an absolute joy. Fast forward 5 years, and I still longed for my little girl Ragdoll kitten. I had stayed in touch with the breeder, and would visit from time to time to visit girl kittens but never had a “connection” with one of them. It was one of these visits that I met Denali.

My sister and I came to meet yet another girl kitten, but it was quickly apparent that it wasn’t a good match. As we were visiting, a litter of “chocolate” kittens playing in the living room caught my eye. They were different from any Ragdoll kittens I had ever seen, and the breeder explained they were Mink Ragdolls. I had no idea what that meant, but not only were these kittens adorable, they had blazes. I’ve always loved the look of Ragdolls with blazes, and especially admired Floppycats Charlie! 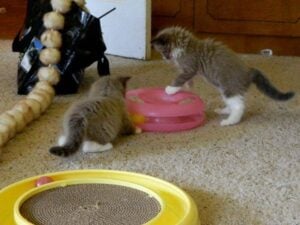 One kitten had a crooked blaze and one had a perfect hourglass blaze. The one with the perfect blaze had an amazing personality. He immediately came to see what I was doing and crawled into my lap. Then he took off to play with the rest of the litter, but came back to make sure he wasn’t missing anything where I was sitting. He flopped over (at 6 weeks!) and let me rub his belly.

I was falling in love, but my heart sank when the breeder told me it was a boy. I already had two boys, and really wanted a girl … she also told me he was the only one in the litter that hadn’t already been spoken for (so he was available). I told her I would think about it and let her know in a couple of days. 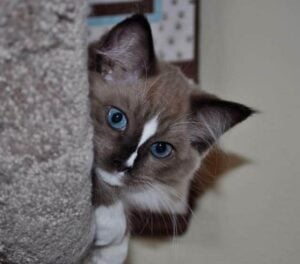 It was only 30 minutes later, while my sister and I were having lunch that I called the breeder back and said I wanted him. It was much more important to me that I have a good personality match rather than gender so the next thing I knew I was anxiously waiting the 4 weeks before I could bring him home. 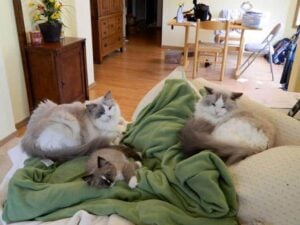 In anticipation of his arrival, I had set up everything he needed in the guest room. I read all the information on Floppycats.com about slow introductions. But Denali was having none of that, and within 3 days he was one of the boys. Dusty (one of my older boys) took him under his wing immediately and they are best friends to this day.

The personality that won me over the day I met him has been a blessing and a curse as he’s grown up. He was one of those kittens that was into absolutely everything. He meowed for attention and was a restless kitten that had a lot of energy! He was a year old before he slept through the night, and even now he has to be the center of attention at all time. Sometimes he meows incessantly if he thinks he’s being ignored and sometimes for no reason at all! He is much more outgoing than his older brothers and never misses out on greeting guests. He is a bit of a bully to Stormy and is always picking on him, but I’ve caught them snuggling together on rare occasions! 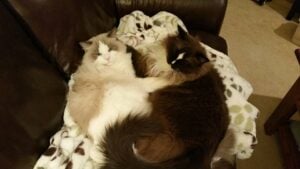 I didn’t know anything about Mink Ragdolls, but they are amazing. They are born with their color, while their traditional littermates are born white and get their color as they mature. Denali’s color continued to darken until the age of 4 and some of his points are so dark they almost look black. The term Mink, however, comes from the texture of their coats. Ragdolls are soft, but Minks are even softer if that’s even possible. I don’t believe in fur coats, but imagine a mink coat and that’s what it feels like.

Denali Bear got his name from his father, Teddy Bear, and my love for mountains and dreams of visiting Denali National Park one day. There are lots of bears in Denali, so I thought it was a good name. Just like naughty children, he only gets called by his full name when he’s in trouble! Most of the time I just call him “Nali”. 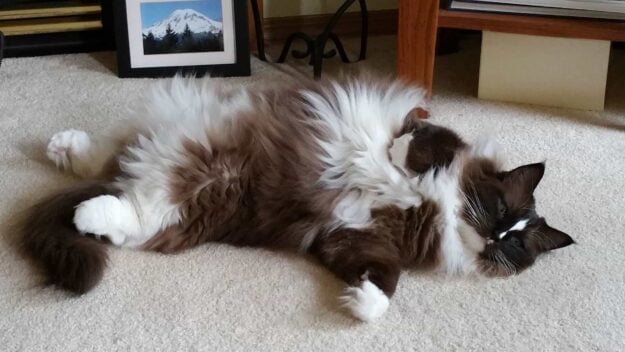 7 thoughts on “Denali – Ragdoll of the Week”