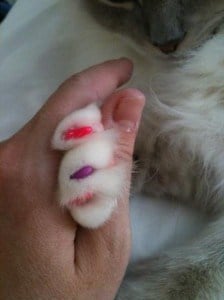 I am very opposed to declawing.

25% of cats in the U.S. are declawed, and a lot of people continue to declaw their cats simply because they are unaware of what the surgery entails – they assume that it is just the removal of the cat’s claws.   However, the procedure actually involves removing part of the cat’s bone as well, since the entire last joint has to be cut off, not just the claw. The Paw Project is trying to educate people on the dangers of declawing through their documentary The Paw Project Movie, and cat expert Jackson Galaxy – who calls the surgery “de-knuckling” – described the practice as inhumane and barbaric in his YouTube video “Declawing: Jackson Galaxy Just Says No!”  Below are some facts to consider regarding problems with declawing, as well as alternatives that can help you maintain a nice home without hurting a beloved pet.

MeLinda Hughes of Merlin’s Hope Ragdoll Rescue has five cats who have all been declawed – and every one of them suffers from various issues as a result.  Hughes argues in her article “Declawing Cats: Alternatives, Problems, and More from a Ragdoll Rescue Expert” that declawing cats causes both physical harm and psychological damage, resulting in long term medical and behavioral problems.  Her cats experienced everything from arthritis, to spine problems, to anti-social behaviors, and more.  As a rescuer, she has noticed that over 50% of the declawed cats who end up in shelters are there because of behavior issues related to declawing.

Hughes’s story is part of a large body of anecdotal evidence demonstrating the negative effects of cat clawing (include mention of/link to the facebook post?).  But not only cat owners have noticed these issues; experts in addition to Jackson Galaxy are speaking out as well.  Holistic veterinarian Jean Hofve, DMV, expounded on the topic and listed many problems associated with the procedure in her article “Declawing: A Rational Look”:

There are a lot of psychological and health problems associated with cat declawing, and the negative side effects sometimes even counteract the purpose of the surgery in the first place.

If you are concerned about your cat scratching humans or damaging your house and furniture, there are other ways of dealing with these issues that simply require a little research and perhaps some training.  Here are a few common alternatives to declawing, as suggested in the Jackson Galaxy article “Cats and Claws – Living Happily Ever After”:

Clipping
Clipping a cat’s nails regularly is one simple solution to the scratching problem.  Cats might not enjoy the process at first, but start when the cats are young and work to clip the sharp tip on a weekly basis so that they will become used to it.  If your cat tries to escape, consider wrapping them in a towel and gently taking out one paw at a time to clip the claws, pressing your thumb on the paw gently until the claws are splayed.  Avoid the dark center of the claw, as this is the quick, and will cause pain and bleeding if clipped.  Be sure also that your clippers are not dull, as this can crush the nail.

Scratching Posts
We now know from recent insights into cat behavior and psychology that scratching is a natural urge for cats.  Consider getting them a scratching post, a cat condo, or a cat tree, and training them to use these instead of scratching household objects.  It is important to try to find the best option for your cat’s preferences—for instance, there are horizontal cardboard scratchers for cats who tend to scratch carpet, small ramps for cats who like to scratch furniture, and upright post that simulate trees—which is what cats often want to scratch in the first place.  Pay attention as well to the material of the post, aiming for what most resembles what the cat likes to scratch.

Deterrents
Sometimes you can put something on the furniture that deters a cat from wanting to scratch it.  You might use scents, such as certain pheromones or some lemon/lime water since most cats do not like the smell of citrus.  You can also put something on the surface, such as tin foil or Sticky Paws, a product that functions like double sided tape and is unpleasant for the cat to touch.

Soft Claws or Soft Paws
This is another product just for cats, and is useful for cats who refuse to use a scratching post.  They are nail caps that a groomer or vet can put on, but pet owners can also learn to do it themselves.  The only downside to this option is that they need to be replaced every few weeks, which can get expensive if you do not learn to replace them yourself.

Check out the article “Do Not Declaw Your Cat(s), Ever!” for more information on declawing and solutions to getting a cat to stop scratching floors and furniture.

A major part of getting your cat to stop scratching where you do not want them to is training, which requires, a lot of time, patience, and positive reinforcement.  Declawing a cat might be a more expedient option, but it is definitely not the most humane, effective, or even cost efficient solution to scratching problems.  Many vets and breeders are even coming around to this conclusion, and as a result many vets are refusing to do the procedure and breeders are asking owners to sign contracts not to declaw their cats.  As the side effects of declawing are becoming more and more publicized, educate yourself on what you might be doing to your cat and the other options that are available.