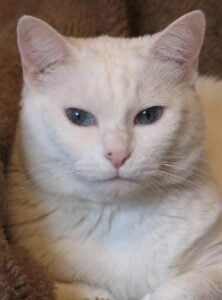 Guest Post by MeLinda Hughes of Merlin's Hope Ragdoll RescueOriginally posted on Mar 22, 2013In 1998, I adopted my first cat, a lovely domestic short-haired solid white cat with blue eyes. Her name is Nimue. She is now 15 years old. When I adopted her from the shelter, the director recommended a vet. When I made the appointment, the vet asked if I wanted to have her declawed when I had her spayed. Not knowing what declaw really was (I thought it was a serious nail clipping), I said yes. When she came home, I was horrified to see her poor front feet bandaged, but she quickly bounced back, and I assumed all was well. I had my next two cats, Lyonesse and Taliesin, declawed with no problems. I had adopted Merlin, but since he was already neutered and was 12-years-old, the issue of declaw didn’t come up, and I didn’t ask.It wasn’t until I had my poor Aslan declawed that I really, truly realized what I had done. The veterinarian clipped his middle toe on his right foot too short. Aslan crippled around for several days before I took him back. The vet convinced me that Aslan had “Limping Kitty Syndrome” (aka Calicivirus) and hospitalized him for a week. I went in every day to visit and was horrified at how he would try to rush to the front of the cage to see me and how he cried when it hurt. I finally took Aslan home despite the veterinarian’s insistence he needed further hospitalization. By now, I 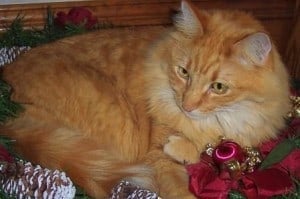 had spent over $1,000. I took him to another veterinarian who showed me his x-rays (I should have known that something was wrong when the first vet refused to let me have my x-rays). His poor toe was at least ½ inch shorter than the others. Aslan did improve, but he always walked funny, and I was appalled when I let him into my enclosed backyard and he tried to run up a tree and ran into the tree rather than being able to climb it.  Now, finally, I did my research and discovered what declawing really was. Declawing is like removing end of each finger up to the first knuckle. For a more in-depth look at declawing, please review this article (please note that this is a graphic visual progression of an actual declawing). Another excellent article about declawing is by Dr. Jean Hofve. 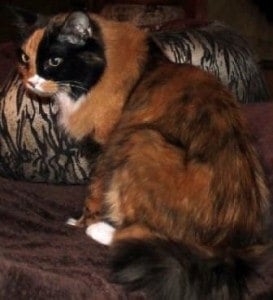 About that time, I started corresponding with animal lovers in Britain, where declawing is illegal, and was faced with their horror over what I had done. I hate to admit it, but I declawed my last cat in 1999, Gypsy Rose, because she was horrible about scratching both human and feline. I thought it was my only choice, that she would endanger my other cats. I now know better, but I so regret what I have put these five cats through. Please note that I declawed five cats in my lifetime, and that all five cats developed issues caused by declawing.So, I learned my lesson, but what I didn’t know was that my problems had just begun. Declawing, you see, doesn’t just cause physical harm (like with Aslan, who had chronic and painful arthritis), psychological harm (like with Gypsy, who is still completely anti-social and lives under my bed), but it also causes medical and behavioral issues. Nimue developed a curved spine from jumping incorrectly.  The damage cannot be corrected. We have accommodated her inability to jump by adding ramps and stairs around the whole house, so she 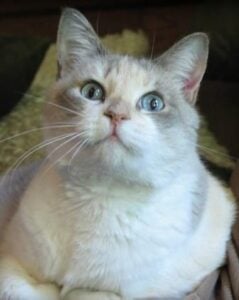 doesn’t have to jump. Aslan, Lyonesse, and Taliesin all developed litterbox issues later in life, and I removed carpet, added paper litterboxes, and created a plan of putting pee pads around the litterboxes so they would know where to go without going in the litterbox (which they associate with pain).  Aslan and Taliesin both also developed chronic urinary tract infections, in part, I believe, because they didn’t want to go in the litterbox. Lyonesse still pees on my bed a couple of times a month. I accommodate her by putting two waterproof mattress protectors on my bed. I can’t even complain. It is my fault, so you can see, I have learned from personal experience what declawing does to cats.But that is not enough. As a rescuer, I would say well over 50% of the declawed cats we take in are surrendered to us and to shelters because of declaw-related issues: litterbox problems, behavioral issues, health issues, aggression issues. Many declawed cats start to bite, because they feel that is their only defense. Many become completely anti-social, hiding so no one can hurt them. Two recent cases at Merlin’s Hope Ragdoll 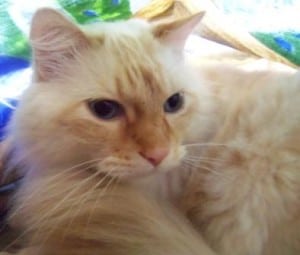 Rescue are MacGrumpy (now MacCreamy) and FooFoo. MacGrumpy was apparently dumped outside due to socialization issues. Being declawed, he had no way to protect himself. He came to the shelter matted, filthy, underweight, angry, and bitter. I rescued him, despite being terrified of how vicious he appeared to be when I went to get him. After I endured nearly two months of constant biting and attacking, MacGrumpy finally came around, but it was a close call. He would have been (and was on his way to being) euthanized because of his aggression.  Recently, we took in FooFoo, a gorgeous purebred 9-year-old declawed Ragdoll male who was dumped outside because of allergies in the house. He came and immediately showed major litterbox issues. Fortunately, there is a wonderful litter called Cat Attract.  With a larger litterbox and Cat Attract, we have managed to curtail FooFoo’s litterbox issues. He also has some aggressive tendencies, but I believe those will settle with time. 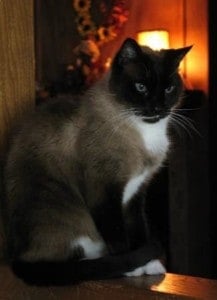 As a rescue, we refuse to adopt cats into homes where people are going to declaw. We do, however, recommend our declawed cats if we have any. Many rescues will not even accept declawed cats into their program due to liability issues (biting); we take them, but we warn adopters that integration may be twice as complicated with a declawed cat.Reasons people give for declawing include fear that a child or dog might be scratched (a cat scratch tends to be much less dangerous than a bite), fear of furniture damage (furniture can be replaced; it can be covered by slipcovers; it can be protected with sticky-tape products or Bitter Apple Spray that discourage cats from scratching),  fear of aggression (actually, declawing may cause more aggression, especially passive-aggressive behavior), fear that a declawed cat in the house might be in danger.If you are concerned about your cat’s claws, please know that there are a number of excellent alternatives to declawing. Cats can be properly trained to not scratch by using a variety of cat scratchers (please see product reviews on www.floppycats.com; there are literally thousands of different types of scratchers) and using positive reinforcement. There are nail tips called Soft Paws (available at PetSmart and Petco). Cats’ nails can be kept trimmed short. I actually trim my cats’ claws every Sunday afternoon when we have their grooming session.

There is actually no legitimate reason, in my experience, to declaw a cat unless it is for the cat (problems with ingrown nails). A large number of veterinarians have actually even decided to no longer declaw and are actively working with animal welfare groups for legislation to declare declawing illegal in the US, though a significant number of vets still declaw. Note that declawing is a major source of income for vets, so please consider that before you rely on your veterinarian’s recommendation about declawing.  In my situation with Aslan, the vet actually received even more money from me because the vet botched his declaw. There is a new form of declawing, tendonectomy, which is supposedly less painful. It may be less painful at the outset, but this is not a suitable substitution to declawing. In fact, it can cause even more issues.Many declawed cats live happy, healthy lives, and this is not to say that all declawed cats develop visible issues. Unfortunately, the potential for these issues is high. Furthermore, if for some reason your declawed cat ends up in a shelter, please know that he is much more likely to be euthanized than a clawed cat. Cat shelters are stressful environments, and when declawed cats end up in shelters, there is a great possibility for either extreme fear or extreme aggression, both of which lower the cat’s adoptability and endanger his life.Copious amounts of information against declawing exist. One article I like to recommend to my adopters is by well-renowned cat veterinarian Dr. Jean Hofve on declawing. Dr. Hofve also has a website called Little Big Cat at www.littlebigcat.com where she provides additional articles on cat behavior and declawing.  Additional information on cat behavior and declawing.Please just be aware, before you decide to declaw your cat, that valid reasons exist to not declaw and that there are suitable alternatives to declawing that will keep your cat and you happy and in harmony. You are the one making the choice, but please be certain that you are making the best choice not just for you but for your cat.Quotes from well-renowned animal advocates against declawing:Jean Hofve (Little Big Cat): “Declawing is not a simple or routine surgery. It should never be done as a “preventative,” especially in kittens. Despite their reputation for independence, cats can readily be trained to leave the sofa, curtains, or carpet untouched. Using surgery to prevent or correct a behavioral problem is expedient, but it is definitely not the smartest, kindest, most cost-effective, or best solution for you and your cat.”Jackson Galaxy (YouTube video): “It's inhumane. It's cosmetic. It is no different than docking tails, ears or de-voicing a dog. They are workable problems. It needs to be outlawed. I have worked hard and will work harder to help achieve this outcome. Any questions?"[youtube]http://youtu.be/YRMip0Nngp8[/youtube]Noted veterinarian  Nicholas Dodman (from his book, The Cat that Cried for Help): “Declawing fits the dictionary definition of mutilation to a tee. Words such as deform, disfigure, disjoint, and dismember all apply to this surgery.”