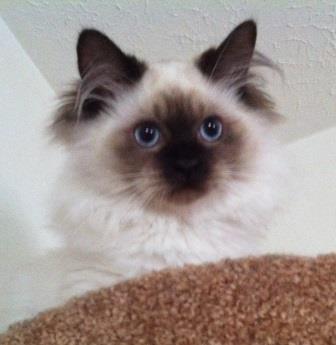 I grew up surrounded by cats.  My parents live on a large 9 acre property and there was always a need for barn cats to keep the mice population in check and as a result we had kittens underfoot every summer.

I was first was introduced to the Ragdoll breed when my parents decided to adopt a mother cat and her kittens. Of the five kittens Bo (my male Ragdoll) was the only one that was obviously different. While the other 4 kittens appeared to of the long hair domestic breed Bo was all white with seal points and had striking blue eyes. Female cats can sometimes be impregnated by multiple male cats which is what we assumed had happened to Bo’s mother, but we always wondered what breed his father was. It wasn’t until we saw Animal Planet’s CATS101 that we realized which breed Bo most closely resembled. And boy did he fit the bill. He was very affectionate, of course the coloring was the same, and he was like liquid to hold. Bo was obviously not a purebred Ragdoll but I was hooked.

I adopted my first cat Gambit (a Ragamuffin rescue) when I was a senior in college and a year and a half later after moving in with my girlfriend we decided to purchase Darwin from a breeder in Wisconson. Darwin is now two and a half years old and is a seal point male weighing in at only 8 lbs. We joke that holding him is like picking up a cloud. We have had him since he was 8 weeks old and my girlfriend decided to name him Darwin so that we could say that he is more “evolved” but that has been the biggest irony in our house for the past two and a half years. Let’s just say it’s a good thing he’s pretty because there are times that we wonder what is going on behind those beautiful blue eyes. 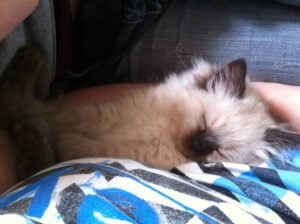 After we brought Darwin home introducing him to Gambit was highly amusing. Gambit who had become accustomed to running the household wanted nothing to do with the small white ball of fur that we had brought into his home and pouted for a long time (we still aren’t sure he’s forgiven us yet.) Darwin on the other hand was thrilled to have a live in play mate to endlessly annoy and that relationship dynamic has continued to this day! They can be found sleeping together and cleaning each other but if Darwin gets too hyper Gambit  loudly lets him know of his disapproval.

Aside from pestering Gambit, Darwin’s hobbies include following me from room to room and fussing if it’s been too long since he has been picked up. Playing in boxes is of course a favorite but with the odd quick of bitting and ripping up the boxes he like to lay in. He also likes to play with this toy that has feathers attached to a string on a stick that we got for them, racing up and down his cat tree, and rolling around in catnip that we put on their lounge scratcher. 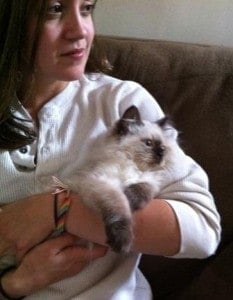 Perhaps my favorite thing about Darwin however, is every morning when my alarm goes off three seconds later there is a soft “kerflump” on the blanket, a chirp, and darwin appears on my chest for some morning cuddles before the day starts. Once i’m out of bed he tries to herd me into the kitchen to feed him by chirping and walking partway out of the room and then turning around to make sure I’m following him and if I don’t right away I have a permanent shadow lecturing me.

Darwin is an endless source of entertainment and we will mostly likely be a Ragdoll run home for the rest of the foreseeable future. 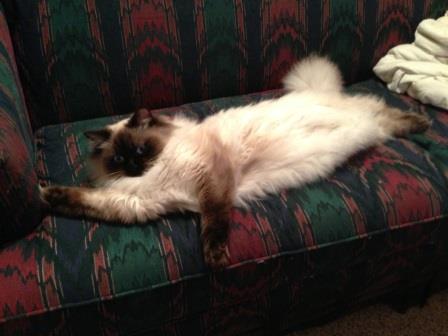 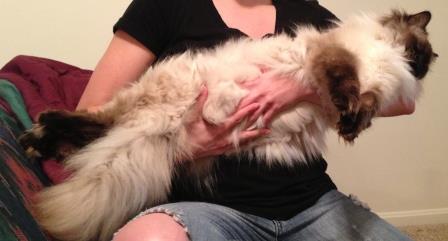 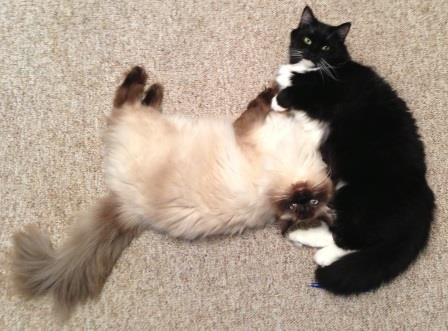 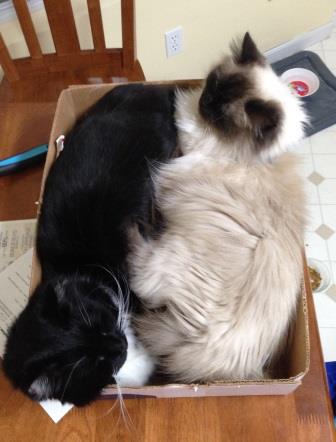 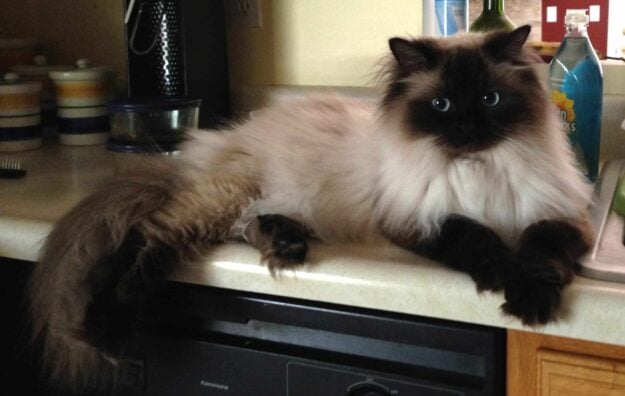