Hi! My name is Kristie and I have had cats since I was 5 years old. My first cat was a Himalayan Seal Point. His name was Puddy and he lived to the age of 18. My second was Puddy II and she lived to the age of 17. While still having Puddy II, and seeing that my work entailed travel, I decided to get a Ragdoll. This is in 1992. I researched, attended cat shows in San Diego and visited multiple rescues until I came across the Birman breed. I was torn between a Ragdoll and a Birman. Finally, I adopted Quazie, the Birman from a breeder. He lived until the ripe age of 21 years and passed in 2012.

I have always wanted a Ragdoll since I could remember. I love their temperament. I debated for years because I was more inclined to rescuing then purchasing a pet. All my pets have been rescues for the exception of Quazie, my Birman.

After finding out that my rescue, Sprinkles a Tortie Seal was going through renal failure, I decided to extensively search for my dream Ragdoll. I wanted a cat that had a good temperament with Sprinkles.

By 2018, I had spent close to a year talking to breeders and searching the internet until I came across Candi from Sweet as Candi Ragdolls. Candi and I hit it off right away. I highly recommend her. She is now located in Southern California. 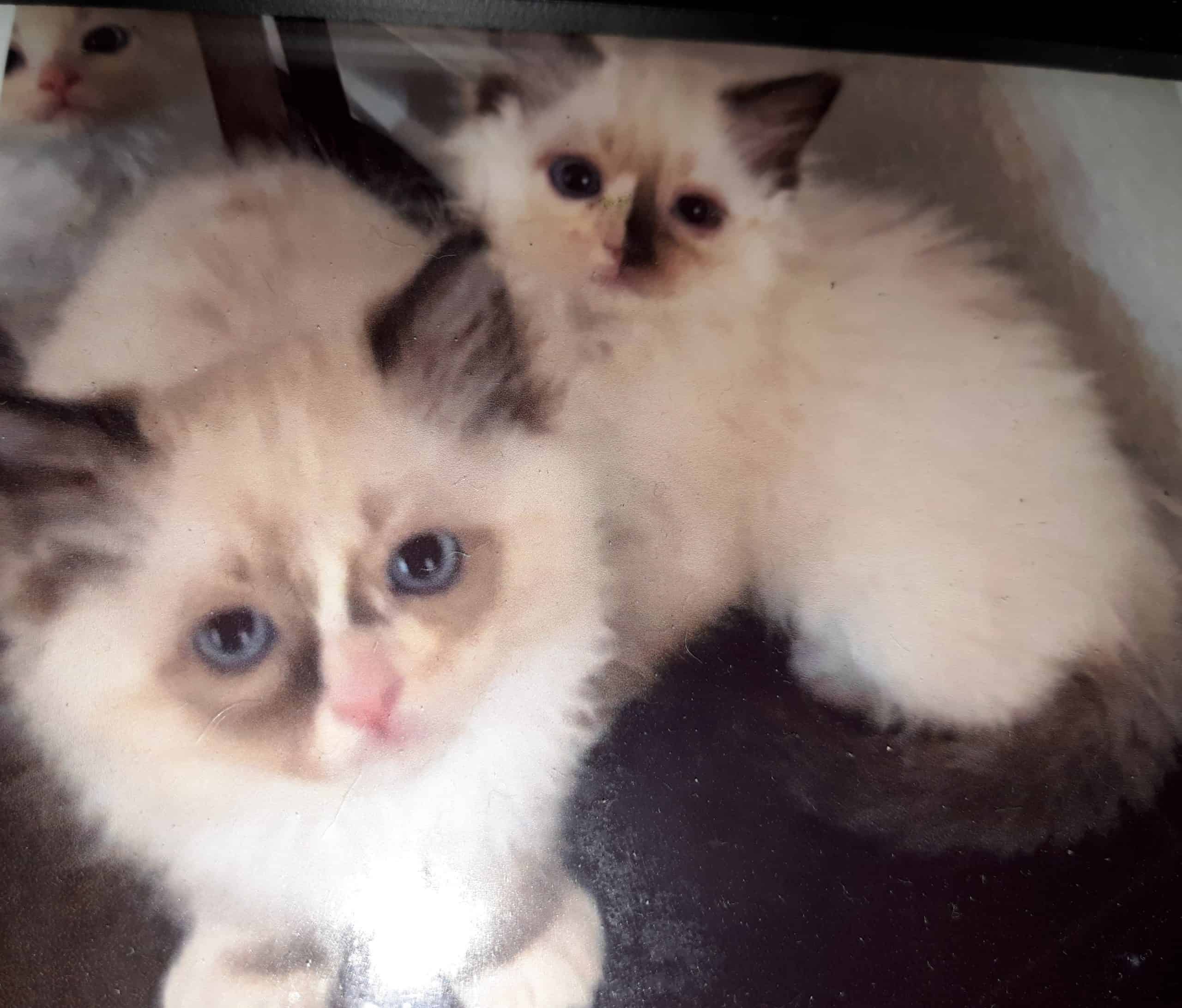 Candi and I spent a good year corresponding back and forth until she sent me the video that would change my life forever. Her Queen- Daphne a Blue Point Ragdoll along with King- Alaska a Flame Point Ragdoll had a litter of seven babies for me to choose from. I was looking for a Tortie Ragdoll and sure enough, this combo was a hit.

Candi sent me a video showing me each baby -

I saw the one with the split face-

...and I don’t know why but the name Daisy immediately popped into my head. She was mine to have!

As the babies grew, Candi kept sending me clips of them growing and a long came Lacy.

Lacy was the ‘’ring leader’’ as Candi put it. Three days prior to Candi’s flight with Daisy, I picked Lacy right up. I strongly believe in littermates and Candi was thrilled and called them the ‘’twins’’. They are far from identical in nature and color pattern; however, they do have the same matching ear markings, which made it difficult to tell them apart from the back. LOL. 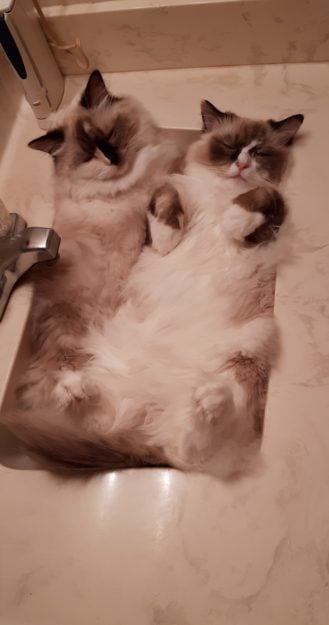 Daisy and Lacy just had their 1st birthday. They were born on 5/19/2020. They have entirely different personalities but are bonded and inseparable since birth. Daisy feels like the queen of the castle and is more laid back where as Lacy loves puzzle toys and plops on my chest every time she gets. 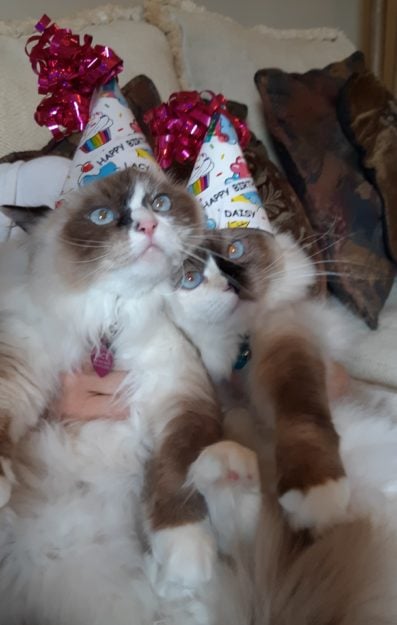 They both love to play with their tunnels, balls, strings, the Roomba and they chase ice cubes on the tile floor. They also have two bigger sisters to contend with, that is 7-year-old Mimi another long hair domestic rescue Tortie, and Honeybuns, a 10-year-old rescued Golden Retriever. 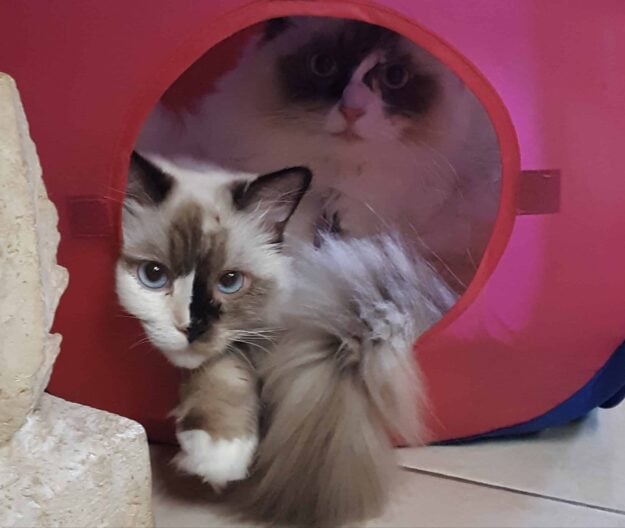 The girls, including Mimi are enjoying Weruva and I have introduced them to Farmina dry food. I tried giving them only wet food but it is quite difficult when Mimi was brought up with only dry food before I adopted her. I rescued Mimi when she was only 7 months old and was on a dry food diet. 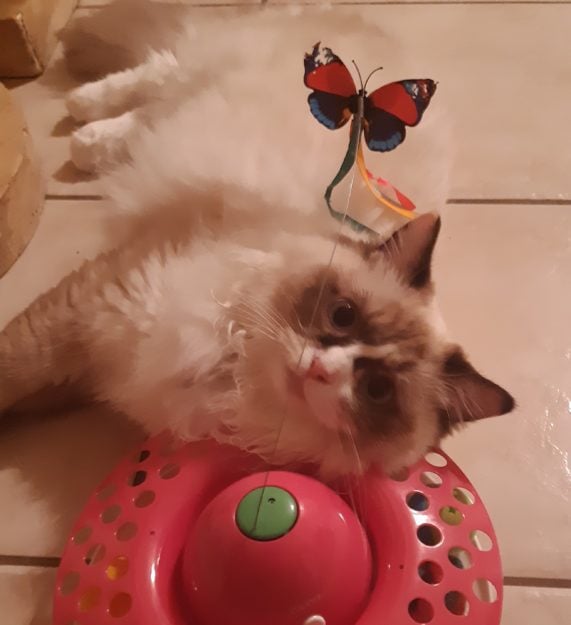 Everyone shares in this household but I try to make sure they are eating nutritional food. The girls also devourer Whole Life chicken and salmon treats. That is their go to treat. 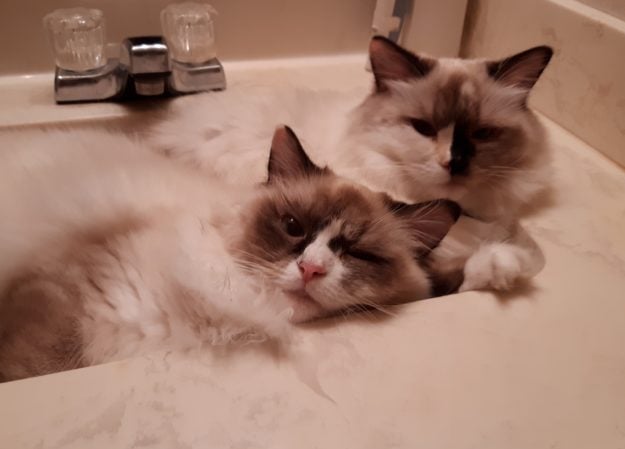 I can’t tell you what a blessing it has been to finally have my dream Ragdoll girls and having a wonderful relationship with their breeder Candi aka auntie Candi. 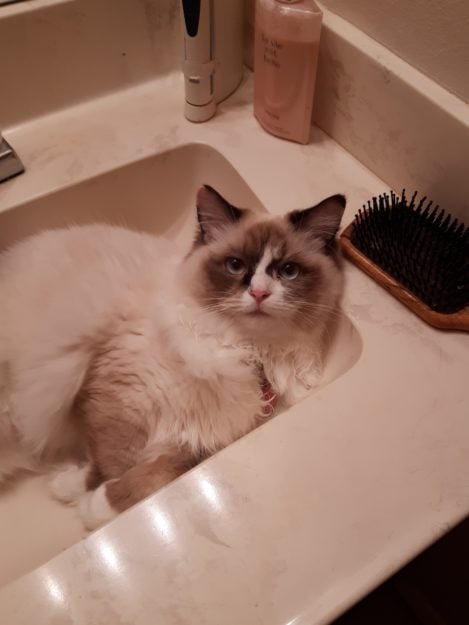 When I leave the house, the girls are always there at the door to greet me and follow me everywhere I go, especially to the bathroom. I never thought I would ever get a chance at a Ragdoll let alone two of them at once. 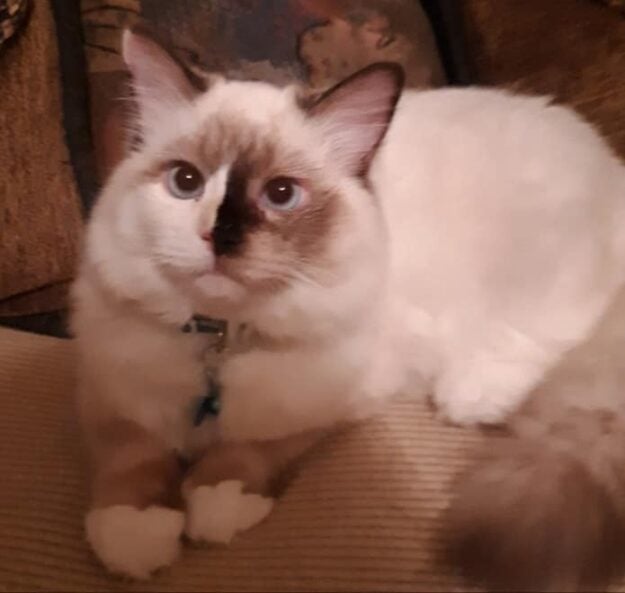 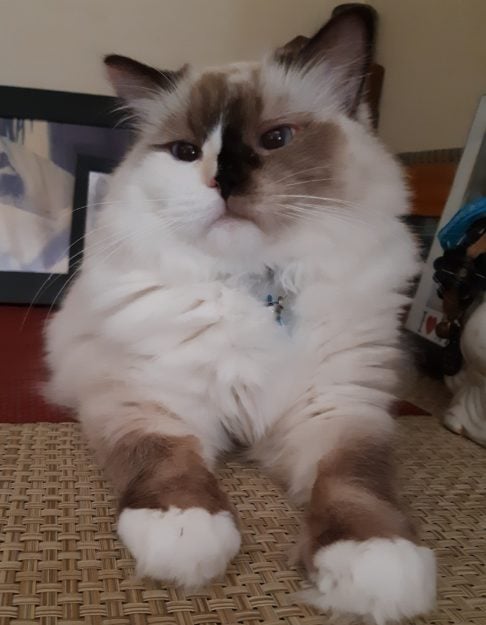