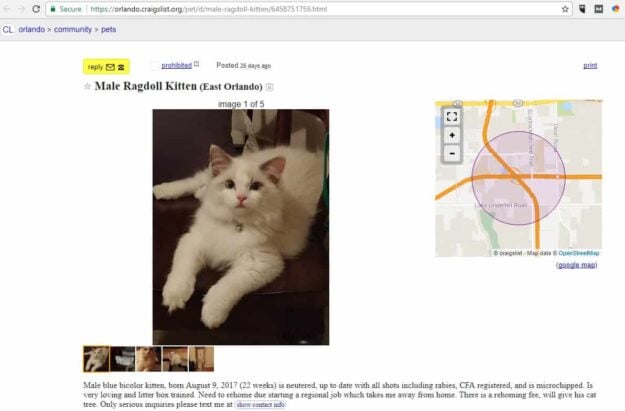 It has been 11 days since I adopted my ragdoll. She came with the name "Candy" but since I have only had a momentary glimpse of her since her arrival, from now on I call her STEALTH CAT!

It all began when in my year long search for a purebred Ragdoll, that I finally came upon the following advertisement in Craigslist:

Male blue bicolor kitten, born August 9, 2017 (22 weeks) is neutered, up to date with all shots including rabies, CFA registered, and is microchipped. Is very loving and litter box trained. Need to rehome due starting a regional job which takes me away from home. There is a rehoming fee, will give his cat tree. Only serious inquiries please text me at show contact info

Attached are 4 pictures of said cat in question. I was elated! I already had a year old half ragdoll at home who is a companion pet for my little Teddy Roosevelt Terrier. Clover. His name is Greyson and they get along like two peas in a pod! So I just HAD to have a ragdoll for myself. This seemed like purrfection. He was a little younger than Greyson and hopefully Clover, Greyson and this new addition would get along swimmingly. So I texted as per the request in the ad.

He wanted $700.00 for the kitten, which with all the shots and microchipping was reasonable, but I just wasn't in the position to make that kind of investment at the time. He told me he "already had a pending offer at full price." I thanked him for his time and said, "to please let me know if the sale does not go through."

A week goes by and suddenly I am texted by this gentleman who owned the kitten and was told the sale did not take place and he was offering me the kitten for $475.00. Again, I just didn't have that amount available, but I could scrape together $300.00? He agrees to my price, which I found absolutely amazing! I agreed to meet him at his home at 9am Sunday, which was a 3 hour drive south from my home. But hey, this is a great deal and more importantly, I get the cat of my dreams!

I drive to the house which is located in a VERY EXCLUSIVE gated community with my cat carrier, ready to pick up my kitten! The gentleman opens the door and there are 3 very ROWDY children under 7 years of age. The man now tells me the reason for rehoming the kitten is because it doesn't get along with the new dog. During earlier conversations he had told me that the kitten got along great with their dachshund! Now the wheels are beginning to turn, his stories are inconsistent and my New York suspicions haven't left me after living almost 20 years in the South.

He tells me the kitten is under the couch and he and the kids will retrieve it for me. No wonder this kitten is terrified with 4 people trying to grab it from under the couch! It's at that point the wife informs me that the cat is SPAYED. Now I look quizzically at them and ask, "Spayed? I thought it was a male?" At that point the woman looks at her husband and he quickly says, "I got the terminology mixed up. I meant to say, "Spayed."

I am asked to follow the wife into the kitchen where she gives me some of "her" food and "her litter box". I am not given the cat tree as advertised. The wife and I exchange pleasantries and I tell her about Greyson and I am so looking forward to have this kitten.

It is then and at that time the gentleman brings in what I expect to be a kitten looking exactly like the pictures in the advertisement.

What he brings in is a 2.5 year old FEMALE LILAC LYNX RAGDOLL (SEE PICTURE ABOVE ~ NOT CAT I ADOPTED)

I must say, I was a little stunned to say the least! I have done a LOT of studying about Ragdolls and I CAN tell the difference between a Blue Bicolor and a Lilac Lynx!

It's at this point the wife tells me they bought THIS cat 2.5 years ago and paid $700.00 for it and it has all it's shots and is DECLAWED! It's at that point I see their dog, not a little dachshund but an AKITA! No wonder the cat doesn't get along with the dog. I'd be terrified too, if I had no claws and had to live with a Japanese fighting dog!

My mind is moving very fast. I can either walk out the door because this man is deceiving me or at least trying to. Or I can take this cat that they are offering for $300.00 and take this poor baby out of a bad situation. Must be hard to have lived with 3 rowdy children and an Akita! No wonder she was hiding under the couch!

I ask the wife, if she has her "paperwork" on the cat and she gets me a file with all the information for a Lilac Lynx, including the Bill of Sale from the breeder, the shot, spaying and declawing records from the vet and her original Vet Health Certificate that was presented when they originally bought the cat as a kitten.

Of course, being who I am, I took the cat home. She is truly beautiful and I have a 2.5 year old Lilac Lynx instead of a bicolor! WHAT A WONDERFUL SURPRISE, I decide.

I leave with the cat, in the cat carrier and off I go~upon inspecting the paperwork, I decide to call the breeder and let her know I have one of her cats. She informs me that the cat is TICA registered and not CFA registered. She also informs me that the wife had called HER earlier in the week and said they would be returning the cat to the breeder. The breeder had already found this cat a home, and the person was driving up north to adopt the very cat that was in my possession THAT VERY DAY!

After three hours of driving, I arrive home and let the cat meet the other housemates. She is unimpressed by them and they are equally unimpressed with this beautiful creature with the impressive pedigree. So, I decide to let her out of the carrier, since everyone seems okay with each other.

She ran upstairs and made herself comfortable in Clover's hiding place under my bed. I go up there and bring her food and water and there is already a litter box set up in the bathroom, right off the bedroom. She will be fine, I convince myself and go about my life as usual.

The next day, STEALTH CAT is back under the bed. So, I once again, leave her fresh food and water. I notice she has USED the litterbox so all is well! Hooray. She's eating, drinking and pooping. What a great sign!

The next day when I go to feed STEALTH CAT, I find her under the bed, in Clover's (the Teddy Roosevelt terrier) hiding place CUDDLED UP TO CLOVER! Greyson is back there too!

I, as a stupid human, immediately think Clover and Greyson are bothering her and call them out from under the bed. At that point, with my head on the floor coaxing Clover and Greyson to come to me....Clover belly crawls over and licks my face. Okay, so Clover's telling me she's got this covered, I should go away and leave them to their new friend.

The next day when I wake up, I start my day. And that's when I see little tufts of light colored fur on the stairs going down and follow the tufts into the dining room where there is dry food which is free fed, water flowing from a fountain and two electric litter boxes.

Everyday since then, each day I find new little tufts of hair all over the house. That's my only clue that STEALTH CAT EXISTS!

It's been 11 days and I've only caught a glimpse of her when she ran out from under the bed while I was changing the sheets. And this is how I finally got my ragdoll. Does anyone have any name suggestions? Other than STEALTH CAT, of course. 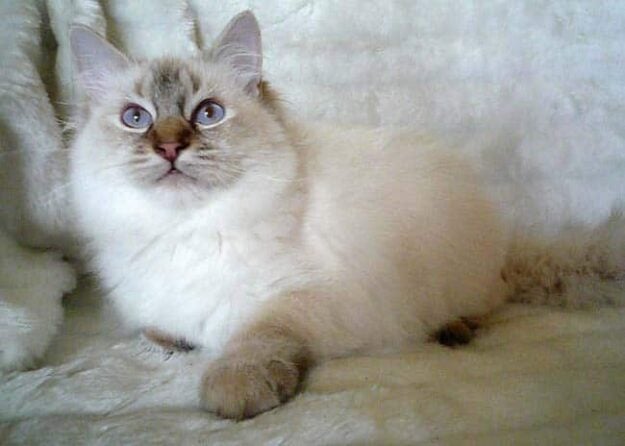