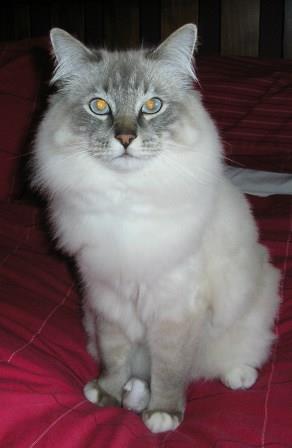 I would like to introduce my new Ragdoll boy, his name is Cotton, or Cotty as we now tend to call him. He has been a member of the household for nearly two weeks now and is such a joy. He is the second Ragdoll that has owned me, my first girl, Carrie, a sealpoint, was an absolute delight.

I was watching the TV over here in Perth about 14 years ago when I saw a story on Ragdolls and from that moment I decided that was the cat I wanted. I bought Carrie from a breeder, but she wasn't socialised and was quite timid with visitors. Unfortunately at the age of 12 she was diagnosed with lymphoma and I decided I was going to fight this terrible disease. She had three courses of chemotherapy and I was very blessed to have had her with me for another eighteen months. 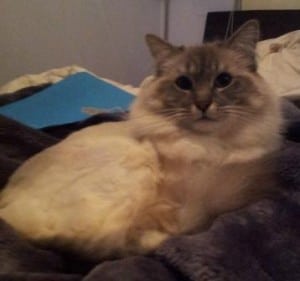 After losing her I decreed that I would never have another Ragdoll as I wasn't going to put myself through the agony of losing one. However, my luck was about to change. I am on a Ragdoll group on Facebook and was approached to see if I would like another Raggie. I was sent photos of this beautiful boy Cotton, and of course immediately fell in love with him. He is a 2-year-old blue tabby mitted boy, he weighs nearly 7kg and eats like a horse. His original owner was devastated when she had to give him up, as she has taken a job in the US for two years. She didn't want any payment for him, just to know that he was going to a much-loved home, where of course he is. I 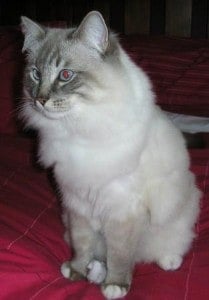 unfortunately don't have any details of his breeder or where he came from, all I was told is that he is a pedigree boy.  I send her photos of him most days, I cannot thank her enough for the joy she has given me by allowing me to adopt him.

Cotton is a very confident boy, he greets people at the front door with that usual Raggie trait, falling over in front of people. He loves to chase me around the house, absolutely loves the vacu um cleaner and especially loves to sneak into the shower just before we get in when the water is running. Then he can hop out and put wet pawprints all over the floorboards. He loves to play with the cardboard rolls in the middle of toilet rolls and kitchen paper and he has two fur mice he chases around the house. We are always finding them in unusual positions.

He loves to jump on the bed at night and land on my stomach, the only problem is with his weight it is not a good feeling.  At the moment I am trying him on all sorts of food, wet and dry, although I have been told that there is more nutrition in the dry food. He is loving his 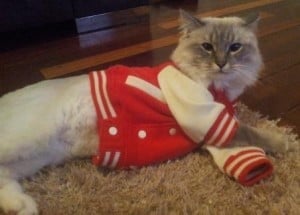 Royal Canin dry food and also Whiskas sachets. He doesn't like milk, so water is the drink of the day for him. I bought him a scratching post the other day, one with the home on the bottom and unfortunately he is too big to get into it. I have a feeling he might be needing a much larger one.

Cotton is living with two golden retrievers, Krissy 12 years and Bonnie 16 months. Krissy loves him and they seem to get on well but at the moment Bonnie is a little exuberant and I am going to gradually introduce them. Lots of special treats for Bonnie and also having her on a lead and just letting Cotton come to her when he is ready. I am so looking forward to having a sofa with a raggie and two goldens sleeping on.