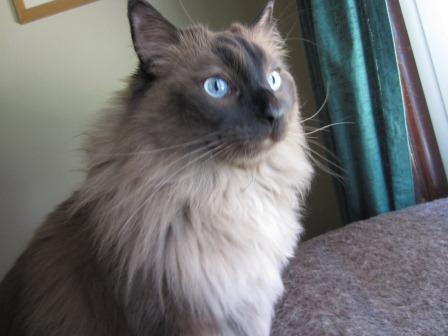 Cooper is a  Seal Colourpoint  born  5- 7 2009. Tica registered.  Cooper came to me via Southwest Airlines on a spring day.

When I picked him up at the airport, he rolled up in a ball, so that I could not see him. 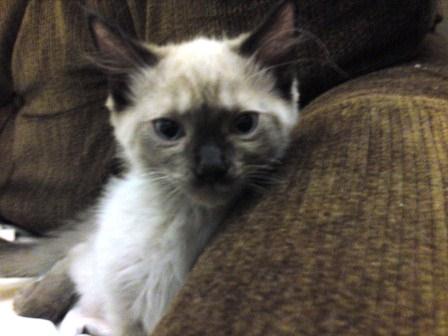 It took awhile for him to come out of the carrier, because he was scared.  But once he came home, he instantly became my friend.

Cooper begins his day by going to breakfast with his buddy, Medina ragdoll. 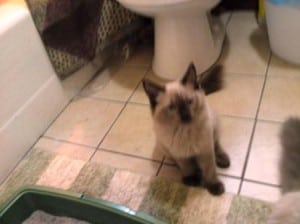 After breakfast, they stroll downstairs to watch TV.  Their favorite show is “Animal Planet”.

After lunch, they go to the window to watch the birds, hoping that one day they can have one to play with.

Sometimes Cooper goes to visit with my Mom’s parrot, Grumpy.  Now mind you, this bird is not afraid of anything let alone, a very large cat.  Cooper watches as Grumpy dances on his perch.  He wishes that Grumpy would come little closer. 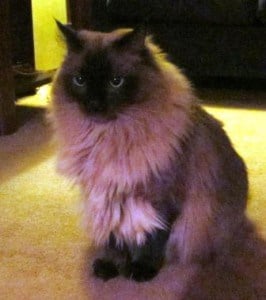 If you ever meet, Cooper, you love him at first sight.  He is a very large kitty.  He loves his tummy rubbed and likes to rub noses.

Cooper does not; however like to be picked up.  If you listen closely though, you can hear Cooper talking.  He talks when he wants attention!

My Mom’s Irish setter, Bella is at the door.  Cooper runs to see her.  Cooper decides she is way too big to be his friend.  Off goes Cooper, to find his bud Medina.

Cooper is a great cat; he waits for me to come home every night.   He attacks the vacuum cleaner when it is running.

When you meet Cooper for the 1st time, he is very shy.  Once he gets to know you, he will be your friend forever. 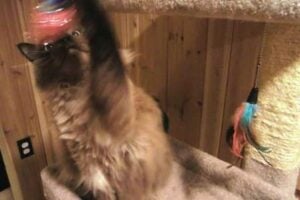 One day, Cooper snuck out of the house and I almost lost my mind, he ran into my back yard into the snow.  I was frantic and ran out after him.  Luckily I caught him before he would have gone too far.    I should have named Cooper, Born Free, since he is always exploring.

On a hot summer day, you will find Cooper and his buddy Medina sleeping in the bathtub.  I like to think of it as their lounging pad. 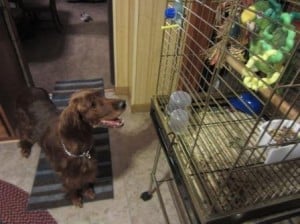 Off they go upstairs to visit my Mom, who greets them at the door.  They wag their tails and step in.  Looking for something to do, Cooper jumps up on the kitchen table.   Across from him is Grumpy the parrot, their eyes meet.   Cooper waves his paw at Grumpy only to hear a loud squawk.

Cooper startled at the noise, jumps off the table and runs away.  His bud Medina finds him and they go back to their humble abode.

As night falls, Cooper and Medina cuddle up together and wait patiently for me to return from work.  When I open the door, Cooper runs to greet me.  After a hard day, this really makes my day!

You don’t feel the love, until you have a Ragdoll.