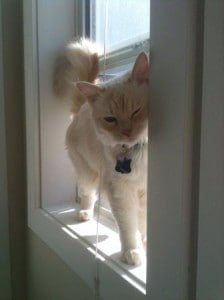 Meet Gus Chiggins! He's a fluffy and handsome Cream Point Ragdoll with indigo eyes! "Chiggins" came to me via Okanagan Rags and they couldn't sell him as "perfect" because he had weepy eyes. I saw this as an opportunity to "rescue" him and jumped on the chance to adopt and give him a forever loving home. Chiggins was 3 months old when I adopted him, and I had to drive 6 hours that day to get him…but it was TOTALLY worth it, and he laid across my lap the whole ride home... just staring up at me...it was definitely love at first sight! 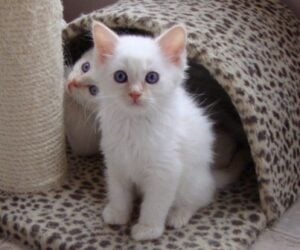 Chiggins was born the day before Valentine’s day in 2010 (Feb 13th) and was pure white as a baby. He now has a fluffy cream tail and cream ears and points. He definitely is a handsome boy! Like all Ragdolls, Chiggins' personality is very laid back and he loves to snuggle with his mom. Following her into the bathroom in the morning, or watching her from the side of the tub as she bathes, sometimes he even hops in the tub! Chiggins has 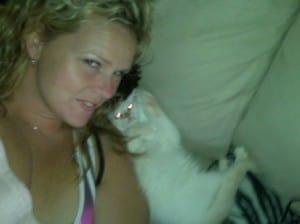 a strange love for water, and last summer, he did quite a bit of swimming in the pool, and also in the lake with his mom!

Chiggins loves all other animals especially dogs! He has no fear and would welcome opportunity to play with anyone at anytime. His favorite toys are his little mouse, and his rubber band ball! Chiggins has some funny qwerks about him as well, such as drinking from his water dish with his paw in it, 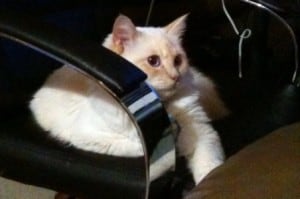 then sucking his paw to get the water...usually followed up by snuggling and sharing his wet paws on his moms face! 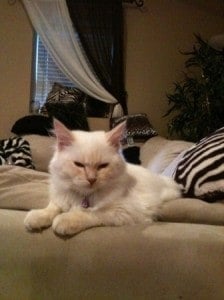 His form of snuggling is trying to bury his nose as deep into his mom’s neck as possible and "kneading the dough" at the same time - he'd make and excellent bread maker one day!

Chiggins has the HIGHEST meow I have ever heard.  It’s very femme.  He is usually quiet 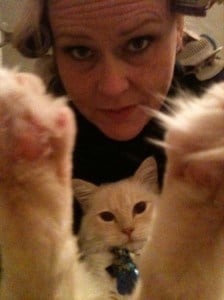 unless his mom leaves him alone ( which he hates). Chiggins loves to be with his mom at any cost.. .even car rides and walks on the leash…as long as he’s with her, he's a happy camper!

He has his own Facebook profile (Gus Chiggins) and welcomes anyone to add him as a friend! Chiggins also has a rather large fan base on YouTube and Twitter!

Here's a video of Chiggins being put in a pool for the first time: