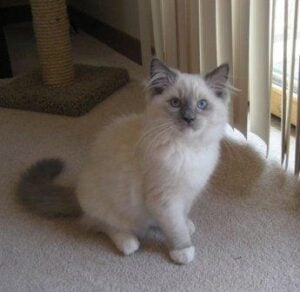 I grew up with cats and always loved them so much, so i knew that when i was finally grown up and out on my own i would own a cat of my own. I pet sat for a family who had Ragdoll cats and fell in love with them. I did research online and found a breeder about 2 hours from where I live. I dragged my boyfriend at the time with me to go see the kitties (he was totally against me getting a cat, but I did not care) When i went to meet the kitties i was told that the litter i was seeing was born on February 9th. This is also the day of my Birthday, so i knew i just had to have a kitten from this litter. I picked out a blue mitted little boy, and a few weeks later i went to pick up the love of my life...My boy Charlie. I named him after my Grandfather who was very 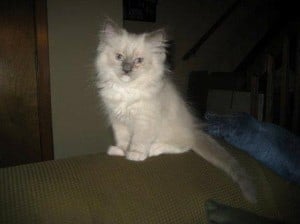 Charlie as a kitten

special to me..my mom still jokes to this day that its funny cause my grandfather was not much of a cat person.

When i brought Charlie home he was about 9 weeks old...he was so cute and little and he developed a cold. It was awful. I felt so bad for my little baby. I took him to the vet and they said he had Feline herpes. One of his eyes was so runny and his little nose was so snotty....my boyfriend and i would literally run for cover when he sneezed!!! LOL.. Luckily he didn't act very sick though..he still was very active and ate great! We put him on antibiotics and the 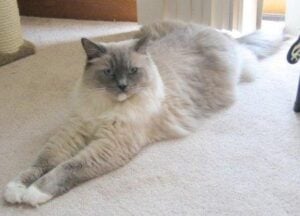 Vet said as he got older his immune system would get stronger and he would get better and he sure did...he grew into a HUGE healthy boy! Oh and by the way the ex boyfriend who claimed he didn't like cats, soon came to love Charlie too 🙂

Charlie just turned 5 this past February. He is literally the LOVE of my life! He has his quirks, but for the most part he is the sweetest most loving boy and he def knows I'm his momma and he lets me do pretty much anything to him. In typical ragdoll fashion he greets me at the door all the time no matter what time i get home...if he isn't 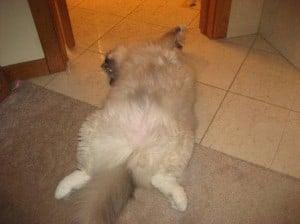 there i get worried. He also loves his belly rubs...he follows me into the kitchen every morning and flops down on the floor to let me know he wants one. Another thing he does that i love is most mornings he jumps on my bed and sits right on my chest and stares at me (although sometimes i get his butt instead of his face!)...all 16 lbs of him! Definitely a great start to my morning. Charlie is of course an indoor cat, but he loves to sit by the open doors and windows once the nice weather comes around as soon as hears the doors open he comes running. 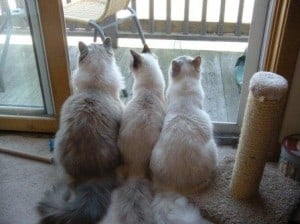 Charlie has two Brothers who are also Ragdolls, My seal point Jackson who is 3 and my Roommates cat, a blue bi color Finnegan who is also 3 (Finnegan and Charlie have the same mom and dad). Charlie definitely lets his brothers know that he is the alpha cat...he loves them, but when he gets bored he likes to annoy them, one second he will be chasing Finnegan around the house and the next minute they are sleeping next to each other on the bed.

My friends all make fun of me because of my cat obsession, but it doesn't bother me...Charlie and my other fur babies bring so much joy and happiness to my life..i could not imagine my life without them! If that makes me a Crazy Cat Lady, so be it!!! 😉 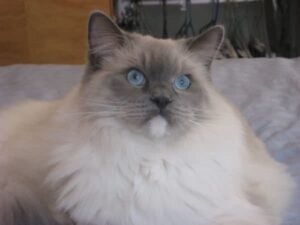 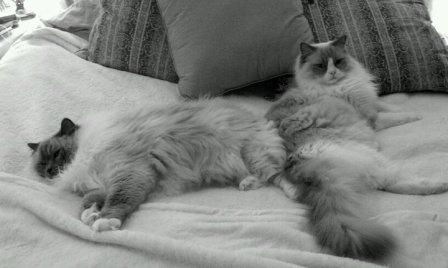 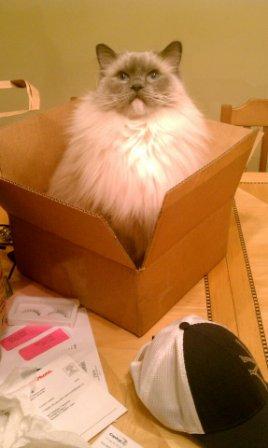 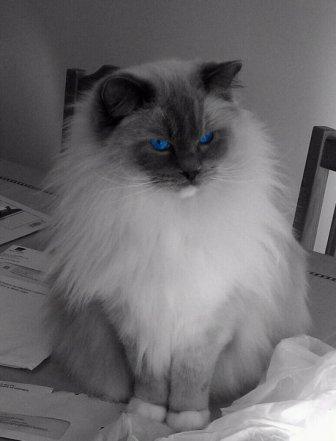