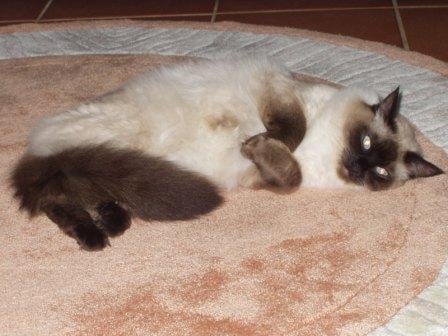 Carrie’s Story through her mom’s eyes:
Up until twenty five years ago I had never really been a cat person, having always had a dog. However when I lost my last dog at 16 I decided I would not have another one. Then I happened to go to a cat shelter in Perth, Western Australia where I met a beautiful odd-eyed white cat which had been involved in an accident and was quite a sad sight to see. So, of course, I had to bring her home. She turned out to be blind in one eye and deaf but I dealt with that by making her a house cat and she only occasionally tried to get out. She unfortunately died of cancer of the nose at 17, not due to get outside in the sun but by laying along the window sills and getting the sun that way. 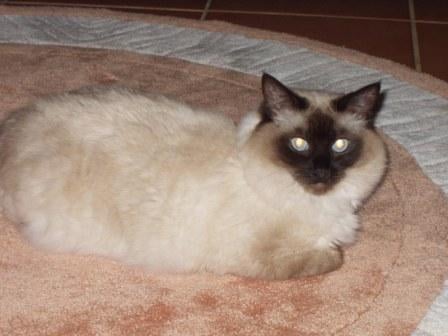 Not long after that I saw on show on TV road testing Ragdoll cats and of course, I naturally fell in love with them. What is there not to!! I did some research on them and looked in the local papers for kittens for sale. I managed to find one not too far away from where we lived, so reluctantly my husband agreed to come and have a look. He has never really been a cat person, but reluctantly agreed to me having one.

I picked Carrie up on Friday, 13th so that is why she is so named. She took about a week to really settle in but after that there were no problems. She has the most beautiful nature, temperament, everything about her is beautiful. I think the only negative point I have is that the breeder did not socialise her properly before I got her so she tends to run and hide under the bedspread if she doesn’t recognise the person who comes to the front door. 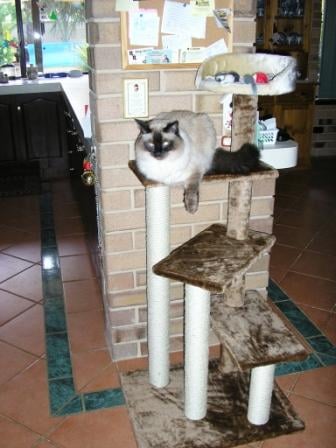 My husband now calls her a cog, half dog, half cat as she loves to play catch the mouse and bring it back to us and he agrees that she really is a great cat. When we get ready for bed every night, after putting my Golden Retriever to bed, my husband just says to Carrie, on your back, and she runs and jumps on the lounge belly up for her belly rub. I have found her to be a very intelligent cat, she comes always when called and knows exactly what you are saying.

She is now eight and a half years old and I am hoping, seeing as how she does not go outside, that she will live a very long and happy life with us. 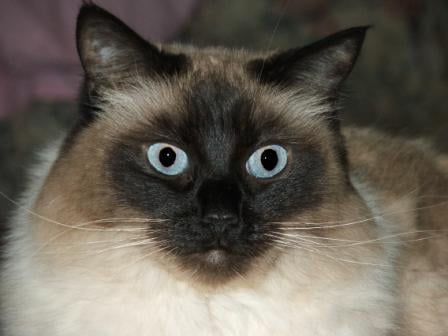 One thought on “Carrie – A Rescued Ragdoll from a Breeder”