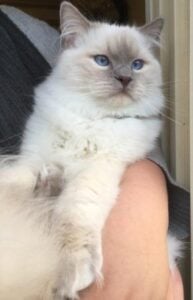 I was always a dog person, until this year.

It started when my cousin bought home a Devon Rex and named her Luna, at first I wasn’t quite fond of her. But days went by, weeks flew by and the more time I spent with Luna, the more I fell in love with her. We were nap buddies and she would purr at me every time I entered the room. It made me think “I want a cat” and I never ever thought that I would say that to be honest. 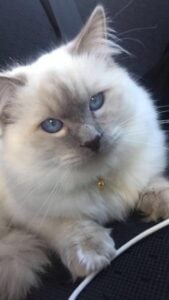 I researched and somehow stumbled across a Ragdoll cat, I watched videos and I instantly knew it was what I wanted so I searched on Gumtree (Australian classified). I felt like I was searching forever because who would want to give their Ragdoll away? An ad then popped up on July 30th for a 9 month blue point Ragdoll, I messaged straight away and asked if I could see him the next day, his name was “Ramzey”. I was curious as to why they wanted to sell him, apparently it was because they moved houses and weren’t allowed pets. By the way, he told me to meet him in front of BWS which is a drive through alcohol store, kind of sketchy right?

Anyways, when he opened his car door, I saw the baby Ragdoll sitting on the passenger seat and I almost cried, he was so beautiful. This meeting was just to view him but his previous owner said “Are you going to take him now? If you don’t then he will probably get sold later”. I wasn’t prepared, I was hoping to take him the next day so that I could have the money ready and buy him his food and other necessities. I said yes, of course I will take him. I quickly rushed to get cash and asked where his litter box and things (scratch post, toys, anything?) were and was told that he didn’t have one and that $100 would be taken off the original price if I just took him by himself. I paid, he left and what upset me the most is that he didn’t even say goodbye to the poor cat. He was so heartless and just wanted Ramzey gone after he received my money, he didn’t care at all because most of the time he was talking to my cousin about his dog not being able to live with him because of the cat. 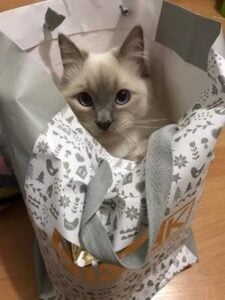 This cat needed saving and honestly, I’m glad that it was me. I’ve got a dog and two bunnies that I believe I take good care of them and this cat wasn’t going to end up in another bad home, not on my terms. I texted him asking what Ramzey eats because I don’t want to feed him unfamiliar foods for the first few days, he said “It’s just biscuits from the local grocery store, I’ll get back to you on the brand”. He never got back to me, the amount of times I messaged.. He never bothered to reply. 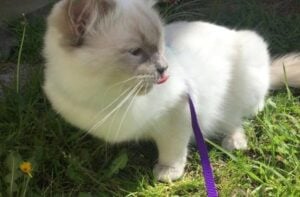 I had to go to the shops to buy different packets of sample foods to see which one he liked, he didn’t’ eat on the first day because he was confused about where he was and who he was with and that was totally understandable. He was so picky and I was struggling but he finally gave in and liked the wet food with salmon and tuna which made me super happy. I researched what the best food for a Ragoll was and decided to visit the pet store where I purchased Royal Canin for kittens and now he is eating Royal Canin Ragdoll because he turned 1 on October 11th and he deserves the very best.

The previous owner has ruined this cat’s life, he did not give it enough or any attention and that’s why Captain (I renamed because the past is in the past) was acting out all the time, he wasn’t desexed and would pee on multiple beds. I promised myself that I wasn’t’ going to give up on him, I had him desexed and although he may still be aggressive, bites me and swipes me sometimes, my love for him grows stronger every day. He may not have the best temperament like he should but that’s not his fault, he grew up around a negative environment and I hope that one day he will learn to trust 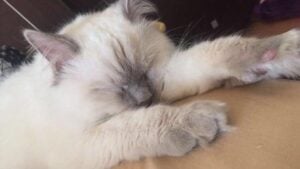 me fully. I love mornings when he purrs and kneads his little paws onto my back, he doesn’t let me cuddle him but I still try because he is so cute.

I’m still teaching him that having a bath and his nails trimmed is a good thing and he is getting used to it and doesn’t make a huge fuss anymore. He is now good with litter training and loves playing with his favourite scrunch ball toy and his nickname is Fluffy Beans. I remember the first day/night with him, he would purr and drop on the floor to show his belly for rubs, it was the sweetest thing. It doesn’t bother me anymore that he makes my sleep uncomfortable, it matters that he is safe and is being treated like a prince. He doesn’t really get along well with other pets but I know it will just take time. He is family now and taking care of him is my top priority. To see his adventures, follow him on Instagram @captainevansragdoll 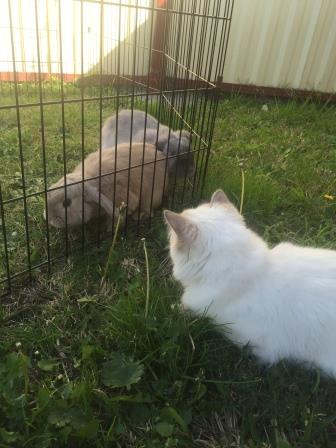 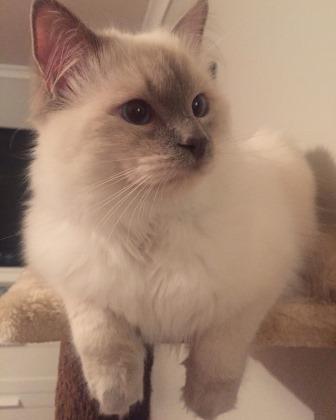 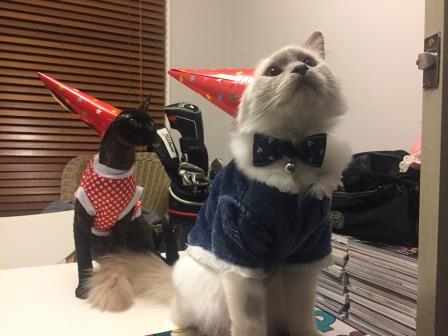