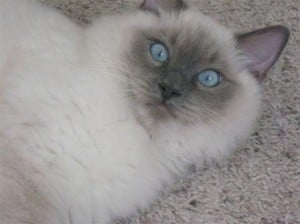 I received my ragdoll, Calvin, in October 2009 for my birthday! His birthday is July 23, 2009. I got him from a breeder, Soulmate Ragdolls, in Salisbury, NC. I would definitely recommend this breeder!! She is great!

I became interested in Ragdolls by doing research on the best breed to be around children, which I chose Ragdolls. I found a breeder in the same state as we are. I have always loved the longer haired cats and wanted a gentle soul for my family. He has the bluest eyes and his fur is soooo soft and bunny like. 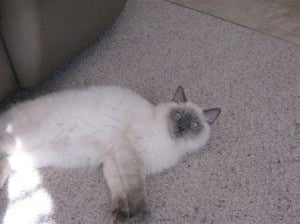 Calvin is sooo laid back and loves our children. His favorite, is my 8 year old daughter. He meows every morning at 630am, on the dot!, to wake her up for school. We don't need an alarm clock anymore. (and we really don’t) LOL! Calvin actually sleep in one morning and my husband was late getting up for work.

He follows my daughter everywhere and if he isn't sleeping with her, he likes to sleep at the end of my legs/in between, cuddled up.

Calvin loves bath water! He paws at it as we are filling the tub up and sits on the edge of it smiling, wanting to jump in so bad. He has gotten his paws wet at times, so he has clean paws. LOL! I find that silly about his personality. He also loves to jump up at the ice maker when we try and fill our cups. If we don't know where he is at, we just get a cup and start filling it up with ice and he runs downstairs and acts wild! LOL! He is the best. 😉 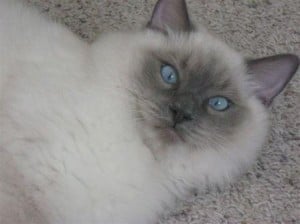 He throws fits sometimes when we are gone because he will have his water bowl dumped out across the floor and his food scooted too. It's funny. I think he just has a running/scooting party when we are gone! I have seen him do it before and it is too funny. He runs and slides behind it. Silly boy! He just loves to be around the family and if we are outside, he scratches at the door, like a puppy, and then just sits and waits for us to come back in.

Calvin is definitely part of our family. He is a sweet boy! 😉

Calvin is the full brother of Floppycats.com's Charlie.

Interested in submitting your kitty as Ragdoll of the Week?  Please read the guidelines here.