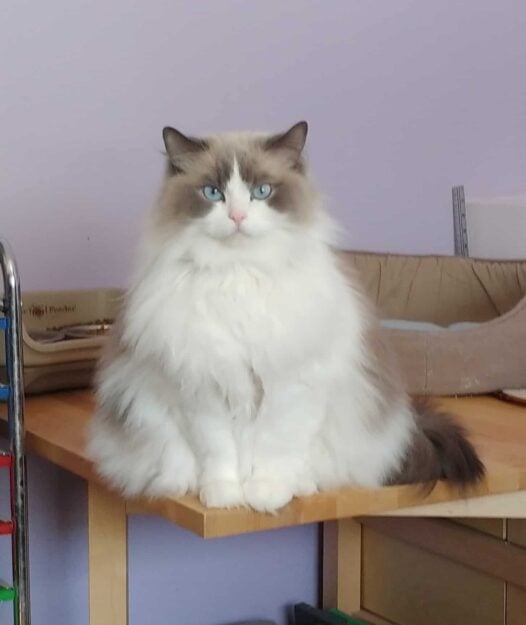 My obsession with ragdolls started in college. A guy on my study team had 2 ragdolls so his house was always my favorite place to go to study. They were such beautiful and magnificent kitties! It was then that I made myself a promise that when I graduated, I, too, would have a ragdoll of my very own! A few years later I started my search for my ragdoll! After many calls to breeders and searching through rescues, I found Angel Kissed Ragdolls who had a litter with a few kittens still available. I immediately mailed my deposit for a female kitten. Cali Rose was born on May 7, 2013. I didn’t get to meet my kitten until the day I picked her up. While I would have liked to meet her before hand or hand pick my kitten, I understand the breeders reasoning for limiting visitors. My mom thought I was crazy for wanting one, since she thought they looked like Siamese and knew Siamese were temperamental. So after weeks and weeks of waiting, the day finally came that I got to meet and bring home my Cali Rose. I brought my mom along for the ride so she could experience this amazing breed! After just a few minutes, she had fallen in love, and found herself asking the breeder if she had anymore available. A few minutes later, she brought out a male kitten that was Cali’s brother. This kitten was to be adopted but the children in the adoptive home were mean to the kitten. He was very scared and skittish, so the breeder was going to rehab him before adopting him out again. Before we knew it, he crawled up to my mom and lay beside her purring and happy as could be. The breeder allowed my mom to adopt him! So instead of coming home with just Cali Rose, Leo joined to go home with my mom. 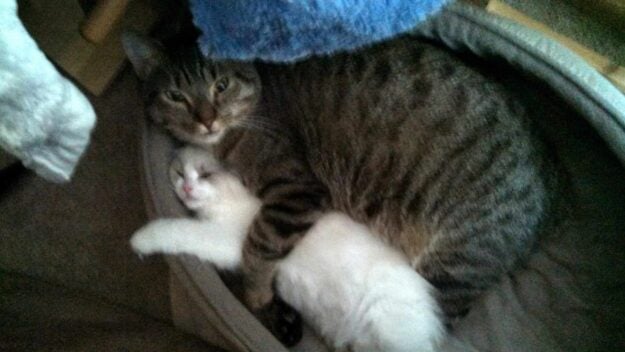 I had a bully male cat at home already, so I kept Cali isolated in a room away from him. After a few days it became evident I couldn’t keep them apart. Soon, the two of them were best friends and our bully male (Rocky) took Cali under his wing to raise her as his very own. He protects her, cleans her, watches over her, and snuggles with her every chance he has. 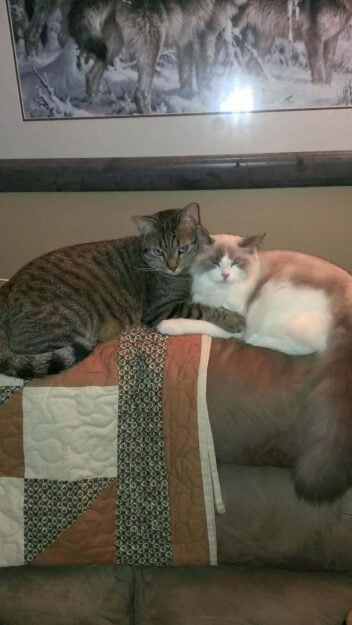 Cali prefers snuggles and attention only on her terms. She will snuggle on our laps but only when she wants to! You can’t force snuggles from her at any time! She loves her water, and anytime we go into the bathroom she gets into the sink or bathtub to drink from the faucet. She has figured out after someone showers, she can get into the bathtub and pull up the drain stopper and get the faucet to drain out more water. We got her a filtered water dish that has a water fall to it, and she loves to scoop it out with her paws and throw it on the floor. 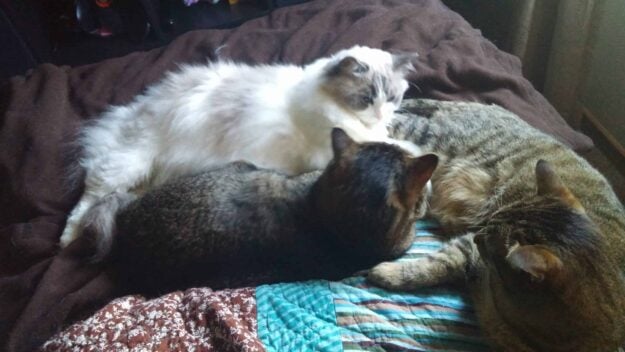 Cali is truly the princess of the house. She gets everything she wants, and with those big blue eyes, who could resist her? We’ve since added another male to our kitty group, and he is also Cali’s big brother! Cali is the youngest of the group, at only 4 years old now. Her brothers are 6 and 7 years old. She is by far the laziest of them all, preferring only to sit and observe. When strangers come over she won’t come upstairs. Instead she sends her brothers to scope out who is here. She prefers to sit in my office window and gaze at the birds and squirrels. She makes a little clicking sound if you bring out the laser pointer. Her favorite place to perch is on top of the 80 inch tall cat tree in front of the window in our downstairs. Her favorite toys are interactive ones that move on their own. She will also sometimes play with these little toy mice that make squeak noises when batted around. 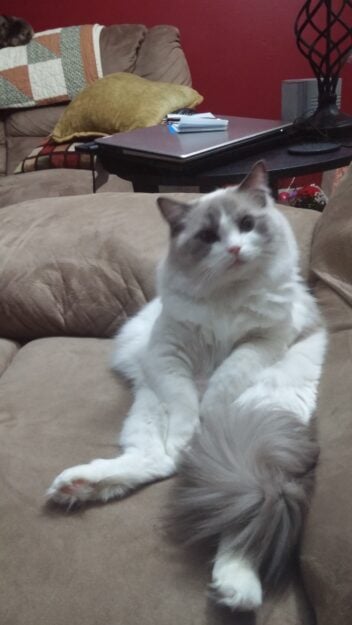 Her meow is very deep, so we call her the “man of the house” when she talks. When she wants snuggles from her brothers, she will jump on them and deliberately lay on top of them until they move and she can weasel her way into where she wants to lay. If she is cold at night, she will snuggle under the covers and lay next to us for a few minutes, then gets down and goes to her own spots downstairs to sleep. Sometimes she will sit with her back legs stretched out and her front legs in front, between her back legs. Then after a few minutes she will just flop backwards. 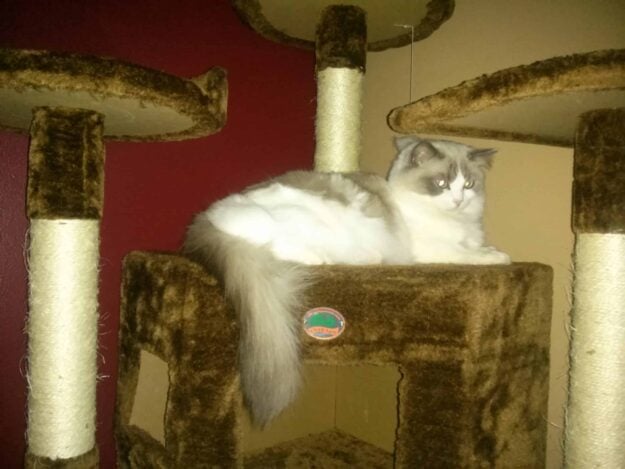 Her love for water leads to her fur getting wet and matted in some spots. At one point it was so matted we had to bring her to the groomer to be shaved. A year later it got so matted again my mom and I brushed her out really good and cut the matted fur out. We were shocked to find a large red spot with missing fur near her butt. I rushed her to the vet, and they diagnosed it as a hot spot. We were told that unfortunately ragdolls are prone to skin issues. We treated quickly and it healed within a few days. She then started getting bald spots from where matted fur was. Now we brush her daily and she has a beautiful, full, fur coat! She is getting used to her brushings and has come to enjoy it. I like the comb like brushes that can get through all the long hair!

Every once in awhile when she was a kitten we tried to get her and her brother together, but all they would do is hiss and spat at each other. Her brother is doing very well, despite having asthma. He is much like Cali, and loves his water straight from the faucet. He also prefers to only get attention on his terms!