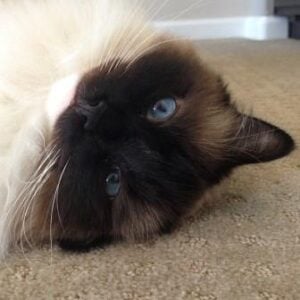 My name is Kimmy and I live in San Diego, California. I’m 23 years old and I’ve had cats all of my life - Mainly Himalayan breed. When I moved out of my parent’s house after graduating from high school when I was 18, I knew I wanted my own cat. I did a lot of research on what breed of cat I wanted and I came across the Ragdoll. I was drawn to their docile traits and laid-back personality and I knew it was the breed for me and immediately looked for breeders in my area.

I found a breeder an hour away from where I live called Beach City Rags in Dana Point, CA. When I called she said she had one 12 week old very sweet boy left who she described as a “mush pot” with an amazing personality, she sent me pictures and I was in love! That night my fiance Tyler and I drove up to 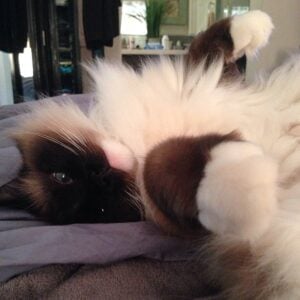 the breeders house and there he was, the most adorable, handsome cat I had ever seen. Needless to say, we ended up taking him home. That was almost 6 years ago, he will be six years old on April 8th. He is a purebred, seal point, mitted Ragdoll.

We named him Boston. Neither of us have been to Boston, just liked the name and the nickname “Boss” because he definitely has a huge ego. We think he might be vain because he knows how handsome he is. We call him Bossy, Bossy Bear, Boston, Bo-Stan, Stan, Stanley, he has a lot of names. He follows us around every where we go, sleeps with us, is always by our side.

He is absolutely hilarious, he tries so hard to be agile and athletic but he really is just a big goofball and not the most coordinated. Boston is an extremely easy going cat, you will find him sprawled out on 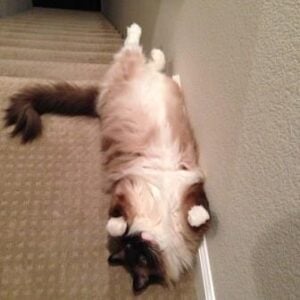 his back more than up on his feet. I take him on walks around our neighborhood with a leash and he LOVES it. Never even had to adjust to the harness or anything. He chases dogs when they walk by, it’s a little embarrassing. I’m telling you he thinks he’s a big shot. He also gets random bursts of energy where he'll run as fast as he can back and forth through the house, up and down the stairs. Sometimes we think he has a screw loose, haha!

He also likes to play hide and seek and when he finds you he'll jump at you and lift his front paws to wrap them around your leg. Boston loves his food (Royal Canin), treats (Greenies), and of course catnip (KONG Natural). If we say “Boston do you want your dinner?” or “Boston do you want your Greenies?” he will always run to wherever we’re at and meow and meow until he gets it. He has an amazing personality. We feel so blessed to have Boston, 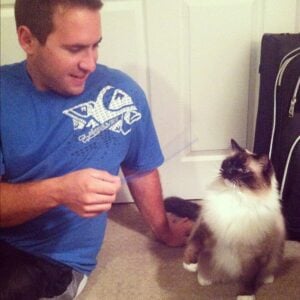 he makes our life so much happier and more fun. He really is like our child and we love him more than anything.

One of the worst days of my life was when we thought he ran away. We were out of town for the weekend in Las Vegas and my sister was going over there once a day to feed/check on him and she called us crying hysterically saying she couldn't find him and may have accidentally left the patio door open. She said she had looked for hours and hours and he was no where to be found. I remember just going into shock. We immediately checked out of our hotel and drove 5 hours back home. I was crying the whole way home. I really thought if he did get out we would never see him again. There are coyotes in the mountains of our neighborhood and 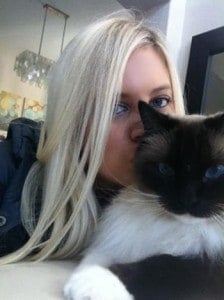 we hear them all the time. Tyler just kept saying he HAS to be there maybe he found a new really good hiding spot. When we finally got home after the longest drive ever we searched the house top and bottom and he was gone. At this point we were both bawling, it was the worst feeling ever. It was 1 o'clock in the morning and we agreed we would look through the night until we find him. We walked around calling his name and saw a neighbor walking his dog, I asked, "Have you seen a big, fluffy cat at all the past day or so?" He said, "Actually yes, I saw a cat sitting on the curb at the entrance to the neighborhood this morning." That gave us a little hope. We walked around the neighborhood with no luck, then as we were walking back towards the house to get another flashlight, I hear Tyler say "Oh my God, Boston!!!" and he came running up to us all wet (it had been raining all weekend poor baby) with grass and mud stuck to his fur. We were so relieved and happy, I can't even explain the feeling we had. 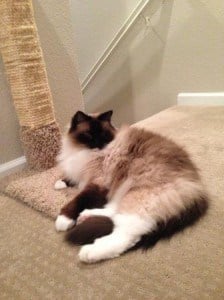 Miracles really do happen! We brought him inside, grabbed him a huge bowl of food and water, and he just passed out in the middle of the floor. He was exhausted. We figured he was out of the house for almost 48 hours. We didn't leave his side for the next couple days. We were just so happy our baby boy was with us 🙂 I am thankful every day for Boston and of course, we now have automatic closers on all of our doors. Not going through that again!

Here are two videos of him on Facebook - Video 1, Video 2 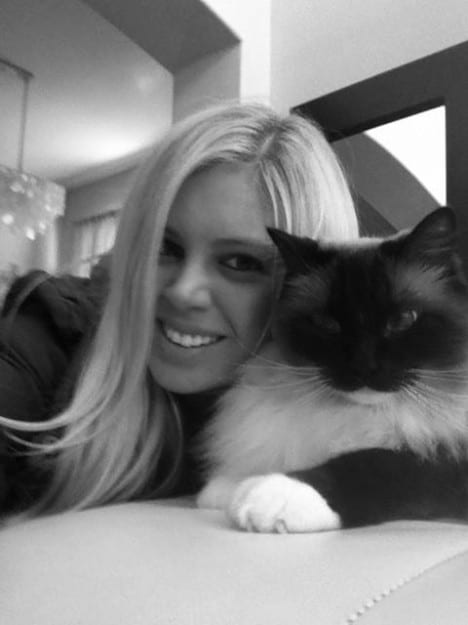