Bob and Stitch - Ragdolls of the Week

I guess in order to tell you how I came to have two ragdolls in our family I need to start with what preceded them, two gorgeous Clumber Spaniels. I have loved animals all my life and have been blessed with the companionship of several dogs throughout my lifetime, the last being my Clumber Spaniels, Bear and Bailey. My boy Bear, had personality for days! He was hysterically goofy, dopey, and the most loving sweet boy I have ever had the pleasure of living with. I used to tell my husband that Bear was the love of my life; he was so devoted to me and me to him. I had him for a year and decided he needed a playmate and a female Clumber Spaniel, Bailey joined our family. Bailey had a personality as well, obsessed with her tennis balls, loved to kneed her paws before she fell asleep and loved, loved, loved to give kisses! Life was happy with these two gorgeous creatures for many years. I used to think how lucky am I that God has blessed me with the most fabulous dogs on the planet? Then eight years passed and Bear was diagnosed with a severe heart condition and I had to put him down. Devastated doesn’t even begin to cover how empty I felt. It just tears your heart out to love something so much and then have it taken away. I still had 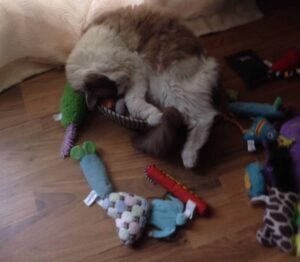 Bailey so in her I found comfort and another six years passed and at fourteen her health began to fail. I knew the time was coming when I would have to say goodnight to her for the last time and in October of 2013 the time came and as I had done every night since she came home as a puppy, I gave her three kisses on top of her head and after each one, I would look into her eyes I say “l love you”. I was broken. I think I must have cried for a month. Six months passed and I couldn’t even bear the thought of bringing another dog into the house, to me it would have been so disrespectful of Bailey and her memory. I knew I wasn’t myself without an animal in the house but wasn’t quite sure I had the courage to begin loving another pet. I had lost my humanity and wasn’t sure how or if I would ever get it back. That’s the greatest gift of sharing your life with a dog or cat they give you humbleness to live for something other than yourself. They give you compassion, patience, joy in simple things, the absolute devotion and joy they have just for the pleasure of your company, they make me, me.

I’m not an overly religious person but I believe God has a plan for all of us. Six months later I was looking through my Facebook page and saw that a friend of mine had liked a post for a pet rescue and staring back at me were some of the most beautiful faces I’d ever seen. It seemed that they had 10 Ragdoll cats and kittens from a breeder who had fallen on some hard times and gave the cats to the rescue to be rehomed. I couldn’t stop looking at them or thinking about them. I decided to do 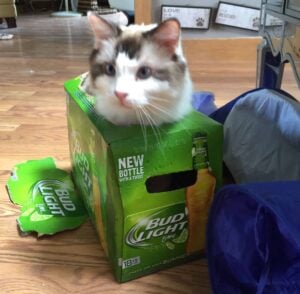 some research about the breed to see what it would be like to live with a Ragdoll. I scoured the internet and read everything I could get my hands on about the breed. I was intrigued; everything I read about them convinced me to just take a drive to see them in person. I left work early one afternoon and went to the rescue with my husband in tow. We arrived at the rescue which was the garage of a split level house and were ushered into an area where there had to be thirty cats running around. A fenced in area separated four of the Ragdolls from the rest of the cats. Two three year old brothers from the same litter, Bob and Stitch greeted us as we entered with flops at our feet. The kittens scattered to the far corners of the cage. I should note that my husband, Mike was less than enthusiastic when I mentioned that I was thinking of adopting a cat. The minute he entered the fenced in area, Bob was all over him, flopping, purring, and trying to get Mike to pick him up. It was crazy, it was like he loved Mike the instant he saw him. Bob worked some Raggie magic because my husband who was whining about we don’t need cats was saying “Do, I like this one, he likes me!”

I’d never rescued any animal before; I’d always gotten my dogs from a reputable breeder when they were puppies so to adopt an adult cat was a new concept for me. What if they had bad habits? What if they sprayed in the house? Plus I was having a moment of panic, was I ready to love again? Did I have it in my heart to love something so completely, because if you choose to own a pet to me there’s no other way. You must own it completely with your whole heart. They give you complete devotion and you should be worthy of that devotion with the same in your heart as well. I was a little stand offish as I suddenly realized the enormity of what we were considering. Was I ready? Not so Sure. I patted Stitch as he continually flopped at my feet while I was trying to get the kittens attention. I chatted with the rescuer while Stitch kept flopping and winding himself around my legs. Bob it seemed had chosen my husband and had him under control. Stitch had his work cut out for him. I finally 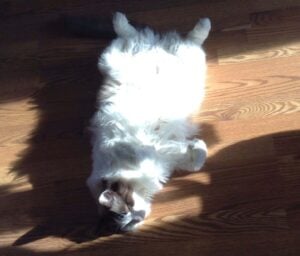 managed to coax one of the kittens to the top of a crate and was talking to it when Stitch came along and gave him a head-butt that toppled the kitten off the crate. Stitch then stuck his head under my hand as if to say “Pay attention to me.” Now he had my attention. I looked at Stitch; I mean I really looked at him. Staring back at me were the most beautiful blue eyes I’ve ever seen. He was quite handsome, and it seemed he was determined to have my attention and now he had it. Stitch had chosen me.

That was a year ago this past April and I have to say, how is it possible that I was blessed to have the most wonderful dogs in the world and now I am blessed once again to be the caretaker of these two magnificent ragdolls? How is it possible for one person to be so lucky? The first night we brought the boys home and let them out of their crates they scampered right under the bed where they remained until we went to bed for the evening. I thought oh boy this isn’t going well. What was I thinking? Then sometime during the night one of them jumped up on the bed and flopped right next to me and began purring and putting his head under my hand for me to scratch his neck. I must have gently scratched that neck for an hour until I fell asleep because when I woke up in the morning Stitch was an inch from my nose purring as loud as a car. I was back, I knew I loved him that minute and that I would love him with every breath I had. Yes I was chosen by this special beautiful boy and it was Stitch and Bob who rescued me, not me that rescued them. | 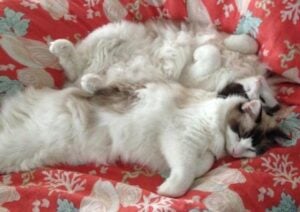 My boys are hysterically funny together when they play and they love to snuggle when they take naps. I’m very much a girly girl and love fashion so when I open my closet in the morning I always say “Boys, fashion central is open for you viewing pleasure!” I know they were meant to be my cats as every time I open my closet they both race inside. We have a fairly large two story home and the boys explore and chase each other through every inch of it. I’ve turned our house into a veritable cat palace over the course of a year. “The boys” as I call them, have every fun cat toy I could find and every Saturday on cleaning day everything gets piled on the sofa and then I mix it up and put everything back in a different place so they stay stimulated and don’t get bored. There’s a cat bed in every room should they get the notion to take a nap I wouldn’t want their royal bones to lay on the hardwood floor (at least that’s what I told my husband when the fifth or sixth UPS delivery was made for yet another cat bed). Every night I call my husband on my way home and my first question is always “How are my boys?” 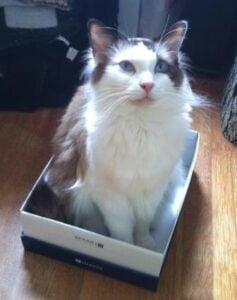 They each have their own personalities my two boys. Bob can’t walk 10 steps without flopping in front of you for attention. He has a very kitten like personality, very sweet, loves to be on your lap at all times yet does not like to be carried or picked up and he loves to play. He plays with his balls for hours by himself. His favorite toys are cardboard boxes, which is why we give him the nickname “Boxcar Bobbie!” He adores my husband and my husband adores him. Mike tells him “Bob, papa’s going to take a shower, or papa’s going to bed.” Bob will jump down from where ever he is and race my husband to their destination. Seriously, I’ve never seen anything like it. For his part, my husband who wasn’t crazy about getting cats is crazy about Bob. Every night he makes me watch while Bob follows him somewhere. “Watch Do, watch him follow me.” They really love each other these two.

My boy Stitch is the alpha of the brothers, very much the boss, which Bob doesn’t seem to mind at all. Stitch loves to be held and would love for me to carry his majesty all over the house if he had his way. He also loves it when I tell him how handsome he is. Seriously, he swishes his tail, squints his eyes and purrs so loud when I tell him. If I could read his mind I think he’d be saying “A woman who appreciates my true beauty” He follows me everywhere and needs to be within eyesight of me at all times. If I manage to make it to the bathroom without him coming in he wails at the door until I open it. Every night when I come home from work he’s waiting at the door for me with flops, meows and loud purrs. If I’m in my sewing room for too long without paying attention to him Stitch will just climb on top of everything and leap into my arms making me hold him until he feels he can go back to his nap on his cat tower.
I am so completely smitten, consumed, loved, and blessed to be their mom. 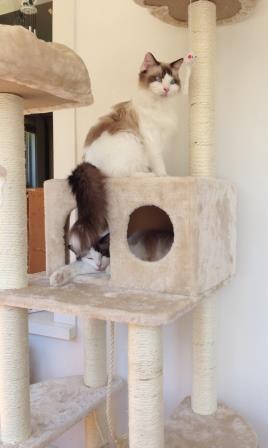 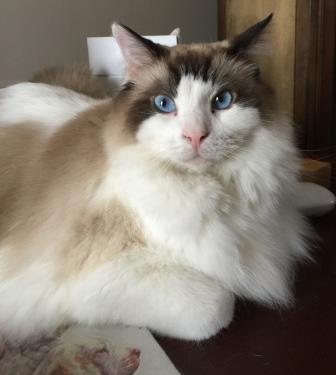 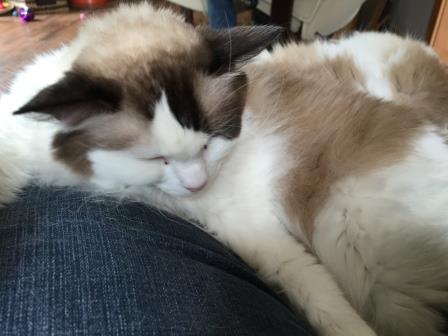 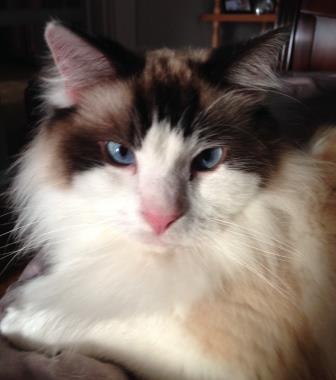