Hello, everyone!!! My name is Blue, blue sky in Arizona.

I was born on September 7th 2015 from Snow (blue mitted) and Buddy (Lynx mitted) at Janet Barry’s Ragdoll house in Phoenix Arizona. 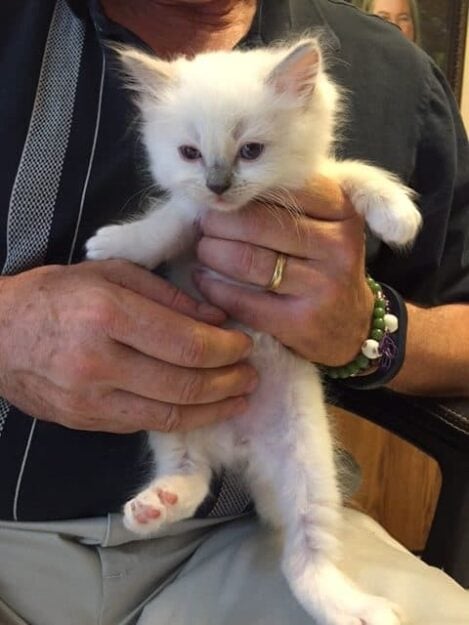 People say I look more like my mom. I grew up in very big family at Janet’s house, probably around 30 of us lived together with Janet, and I loved playing with my brothers and sisters. Oh, it was so much fun!!! and I was busy eating, and playing.

Janet gave me a credit as I grew faster than any other brothers, but she was telling me not eat too much as food costs a lot more for her.

Things changed when I became 3 monthes old. Strangers came, and put me in a car. I didn’t know what happened, and cried a lot, but the situation didn’t change, so I’ve decided to groom myself.

When I noticed, I was in Tucson Arizona with new members Tabbi Scarface, Mike, and Momi. 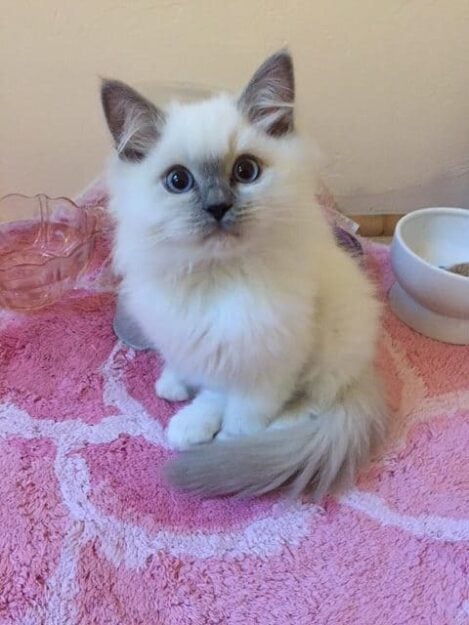 Mike and Momi (M&M) seemed to be nice, and lots of toys and brand new cat trees were waiting for me, but I missed my brothers and sisters so much, and I cried for several days.

I wanted to be friend with Scarface, and I was slowly introduced to her, but she was not friendly at all, and was hissing at me from the first moment. The first impression is very important, right? So, I still don’t like her, and she doesn’t like me, or probably anybody.

M&M looked very nervous when I first stayed with Scarface in the same room as Scarface looked furious. They thought maybe she would attack and hurt me. As expected, she hissed big at me. I was ignoring her for a while as if nothing is happening, but since she was so noisy, I chased her to scar her away.
She ran away! 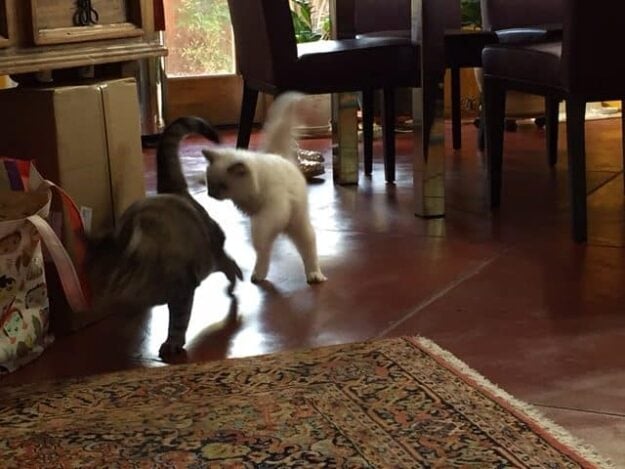 M&M seemed very surprise to see me chasing away Scarface as they learned in a book that Ragdolls never fight back.
It doesn’t apply to me!
For some reason, they couldn’t stop laughing as they realized that they didn’t have to worry so much!

Later, Momi told me that I was welcomed to this house because Scarface was depressed after her master who saved her life left this house with his girlfriend. Although we are not good friends, at least, she is not sleeping all day. Instead, her work now is hissing and threatening at me. I am used to it now, and it’s good that she found something to do in her life.

Momi was attracted to Ragdoll when she was in Tokyo. She saw a model in Japan called Laura holding her bicolor ragdoll on TV. She had never seen such a fluffy big cat before, and it became her dream to have that fluffy cat someday in a future.

In the past, Momi had Siamese cat twice. The second lady Bra was very smart, athletic, and beautiful, lived for 19 years! She had this temper, and even neighborhood dogs were scared of her. When Bra was outside, the owner would carry their dogs in arms, to protect their fancy dogs from Bra.
Momi loves Seal color, but this time, she wanted grey color like me!

Though I don’t remember, when she first came to Janet’s house, all of my brothers looked the same with white tiny body, and if she didn’t know what she was looking for, she couldn’t have chosen one, she said…
I asked her why she’s chosen me. Her answer was “ When I hold you for the first time, and looked at your face, you looked like smiling, and made me smile too. “

M&M gave me lots of toys and trees, and I enjoy playing with ropes, ribbons, ping pong balls, super balls, feathers, laser beams, and battery fish. The one I especially like is mobile rings Momi’s niece made for me. When Momi throw those rings, I can’t help hatching them. 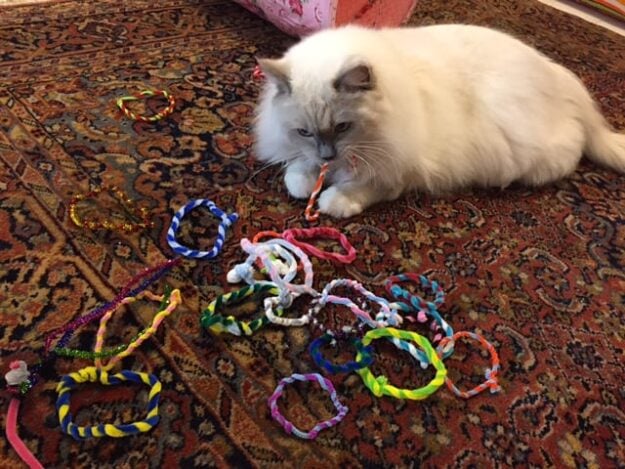 Although I was raised as an indoor boy, I love going out and enjoy sunshine, feel the breeze at our small Japanese garden. I get board soon with artificial toys, but never get tired of chasing real birds, lizards, and bugs. 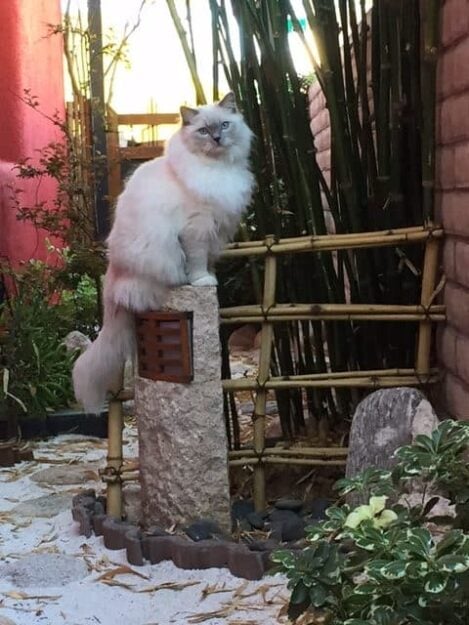 The other day, I tried to catch a pigeon, but miserably failed. It was not even close. Momi made fun of me by saying “ Blue…. you will never succeed in hunting with your white big body…”

Momi never trust my athletic ability as in the past, I slipped and fell into the bathtub to be a wet cat, and many times, I hit my body hard on the walls as I couldn’t stop because of lots of hairs growing from my paws. When I was younger, I missed the step, fell into the toilet, developed an eye infection… etc

But that’s all in the past!! I am big now and I can now jump higher and run faster!! I had to prove I can do it!

The very next day, right in front of Momi, I chased a lizard with full speed, and jumped high enough to get the lizard!!! As soon as I got it, I galloped back to our home proudly with feeling of accomplishment. Momi said, “ I never knew you could run so fast!! You are always relaxed with bottom up position, and don’t move much inside the house.”

For some reason, Momi didn’t look very happy about my black lizard gift, but I was proud of myself, and very glad to show her my capability. If you have time, please check “ Blue’s hunting” on You tube.

I used to love riding on a pink stroller, and walk around the neighborhood, (actually Momi was walking) but the stroller is getting too small for me, and I don’t like it anymore. 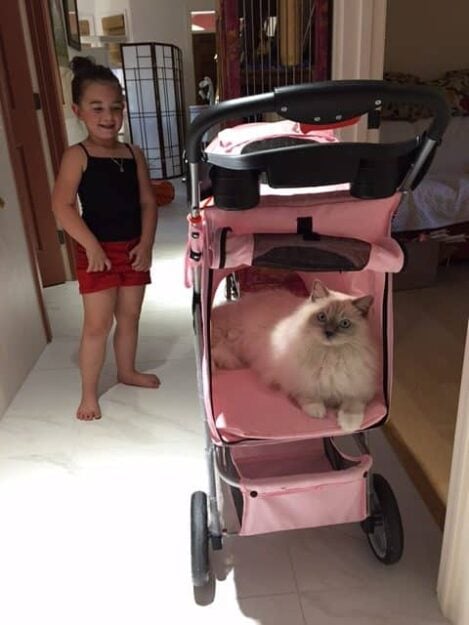 One day, almost one year after I came to this house in Tucson, a lady who looked very much like me suddenly joined us. Her name is Snow.

As she was so skinny and small, she made me feel like I am a fat and chubby boy… M&M told me she is my mother, but I don’t believe so as I am much bigger than her!!

Unlike Scarface, Snow is very sweet, beautiful, calm and elegant. She is a true model Ragdoll who would never fight back.

Her mellow temperament affected our relationships in a good way. After snow joined our family, I pretty much spend time with her. Sleep together and groom each other, play together. We get along very well, and it’s wonderful to have a good friend. 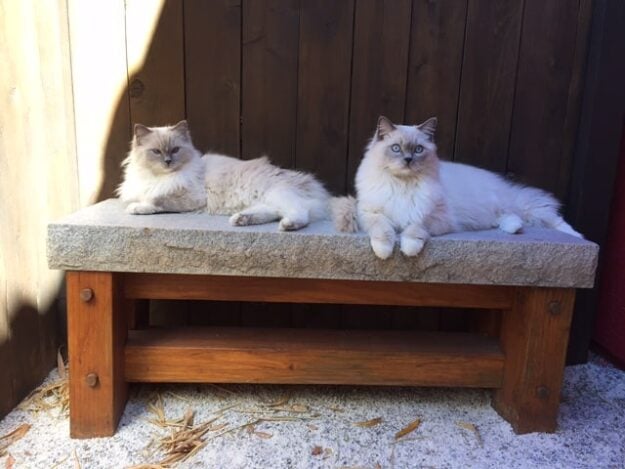 Scarface hates me, but she doesn’t hate Snow. Our overall relationship is much better now.

Lately, M&M learned by reading the Floppycats site that it’s better for us to eat wet or raw food. Now, Momi is gradually switching our food, but I love dry kibbles!!! Scarface and Snow seem to like wet food and shredded bonito, but I can’t stop eating kibbles!

I am begging Momi to give me some kibbles, but she goes, “ If you want to be a good looking gentleman, you need to be in shape. “ Soon, I will be 2 years old, and I weigh 14.5lbs.

It’s not too bad, I think, so please give me some dry kibbles!!

My life here has been not too bad. Whenever there is a party or gathering in our house, I am always the center of attention. People want to hold me and touch my fluffy fur. I am not a lap cat, but holding and touching is ok, actually, I love it.

M&M is both working, and I wish there is always somebody at home, so that I can play with him or her. My dream would be to learn how to climb trees, and catch wild birds, not toy feathers!

Well, thank you very much for reading, and I wish all the happiness for my fellow Ragdolls.

Hope to see you someday! 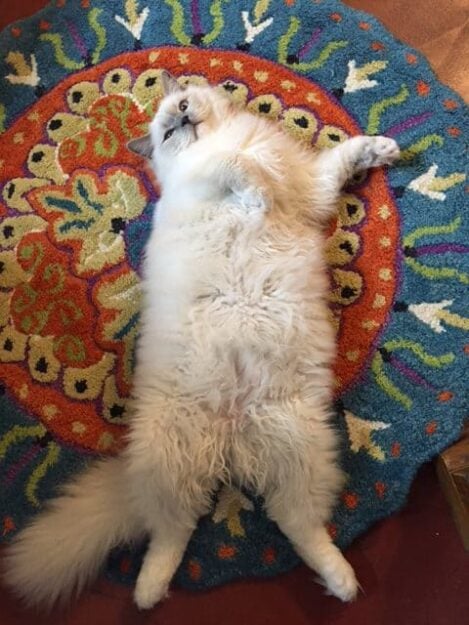