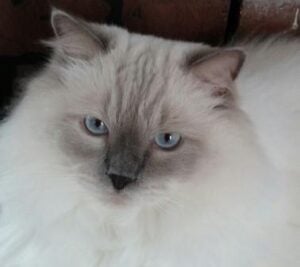 One Ragdoll Cat Owner's Nightmare with a Benadryl Injection

Ragdoll cat George's parents thought that an injection of Benadryl would help alleviate any type of reaction to the rabies vaccine.  What happened next was a nightmare.

During George’s’ annual exam this year, our Vet stated that he was in “perfect health” It was time for George to receive his annual rabies vaccine. We are always leery of George getting a vaccine due to past issues of being very sensitive to any type of medication. Because of past issues, the Vet gave George an injection of Benadryl in his left hip, to alleviate any type of reaction that he may have to the Rabies vaccine. Several days past since the visit we noticed that George was not moving his bowels in a normal fashion. He had symptoms of constipation that included straining in the litter box, crying in the litter box and one episode of emesis. I called the Vet and was told to give George 1/8 to ¼ tsp. of Miralax twice a day. I was also told that I should continue with a daily dose of CATLAX. We assumed that the Benadryl had caused the constipation. Shortly after that, George did have a bowel movement, which eventually resolved, but another issue arose.

Later on that day on (a week after the Benadryl injection), I noticed that George was licking his left hip area more than normal when cleaning himself. Upon investigation, I discovered a hard circular area on his left hip that had a strong odor as well as some drainage. I had not noticed this earlier in the day during his daily brushing.

Suspecting an infection, a trip to the emergency Vet was necessary. The ER VET informed us that George had an abscess (6cm X 8cm) on his left hip that needed surgical attention. George had surgery to excise and debride the abscess resulting in 6 –7 sutures and a drain. George was treated with antibiotics, anti-inflammatory medication, pain medication, warm compresses and an E-Collar for 10 days. I am sure that everyone that has ever had to use an E-collar can appreciate the secondary problems that arise!

Obviously our regular Vet felt awful about this whole situation and offered to help. She did reach out to the manufacturer of the Benadryl and reported the adverse reaction. Unfortunately, it did not end here…George had diarrhea (probably from a late reaction to all the stress and antibiotics), and had to be seen again about a month after the surgery. He was treated with medication and more TLC, of course! George is doing much better, but we still keep a close eye on him and monitor for any changes. I requested that this be posted so that other animal owners are aware of what MAY happen…. Again I am not insinuating that anyone avoids injections. Because we may never know what George reacted to, whether it was the Benadryl, the syringe, or the inactive ingredients, our Vet recommended that George avoid any type of injection in the future. This was very difficult, stressful, and costly for our entire family, and I would never want anyone to have to experience this if it could have been avoided! There are many pets that can tolerate Benadryl and other medications with no ill effects.

I would like to add - I have given Trigg and Murphy oral doses of Benadryl to reduce swelling in their paws after being stung by bees.  It reduced the swelling and their pain levels with no side effects.  So I would feel OK giving them oral Benadryl without hesitation again.

Have you had experience with Benadryl and side effects with your cats?