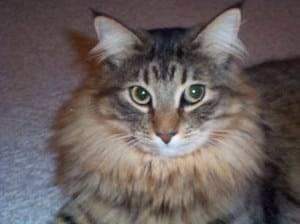 Bear - Ragdoll Kitten of the Month

For those of us who love cats, we understand how important they are in our lives. Those of us suffering from depression and or anxiety our cats can become life savers.

I can’t talk about Bear without mentioning Mac. In late March of this year I lost Mac, my “comfort cat” of 14 years I was devastated. (he was maincoon mix)

One evening after I had been in tears for 2 weeks my dear husband came home and said. “We are getting a cat and here are the 3 breeds that are known for being comfort cats” They were Burmese, Ragdoll and Main coon. I looked at him like he was nuts. As all the cats we have ever owned were rescue cats, there had been a lot of heartache. Mac had been our “lucky find” Healthy and loving. I did not want to go through the “hit and miss” again. I couldn’t.

Then he told me we were going to go through a breeder. To “buy” a cat seemed ludicrous to me. But he insisted we finally get a kitten that we could raise from “scratch.” 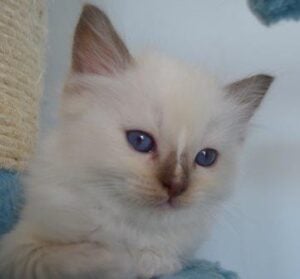 Bear at 7 weeks (known at this time as Monroe)

Our research began and we decided on a ragdoll and found a local breeder. An hour before we were suppose to go meet the kitten we had picked out from pictures on the web, we got a call and were told “something had happened. That was IT. I couldn’t do this anymore, I couldn’t loose another cat. My husband checked and there were no kittens available from local breeders for months. Two days later we got a call from our breeder, Lena from Ragdoll Seattle. She had a little boy that she was going to keep for herself but knowing how heartbroken I was she offered him to us. We immediately fell in love, and named him Monroe and went to visit.

Then we waited until he was old enough to come home.

During this “waiting time” I found FLOPPYCATS and fell in love with Charlie, Trigg and Jenny. After 2 weeks of watching YouTube and shopping our floor was soon covered in “recommended” toys. My dear husband then banned YouTube and the pet stores until there was an actual kitten in our home. I went through withdrawals and the waiting was killing me.

May 25th came and finally he was in my arms for good. After one day we realized that the name Monroe did not fit him at all and he then became BEAR. 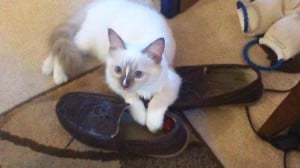 How do I describe my “floppycat?” He is PERFECT.

He is Gentle, already showing signs of a true comfort cat as when my tears come or anxiety flairs he comes and curls up on me without even being called.

He is Smart, one time scratching the couch, showed him the scratching post and he hasn’t scratched furniture since. He knows what a stearn “BEAR” means and changes his actions and looks up at me like.. “what?” 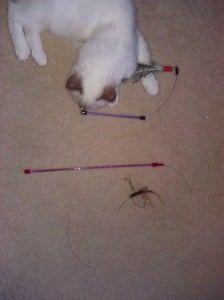 No you can’t take a picture without me in it. Its MY toy

He is Funny, he cracks us up as he fetches his ball and hides it in my husband’s shoes. I have created Hybreds from toys recommended by Jenny. Two of his favorites..the long one is made up from a the “Cat Catcher” with the little mouse removed and a “Necko Flie” attached (this one is the Kittycada also removed the string from the Necko Flie). The other is a “Tiger Teaser” wand with a “da bird refill feather” replacing the bit of fur that was on the end. These toys are great for me as I can use them from my bed or couch.

He is FLOPPY, sleeping is an art form. Changing positions so many times no wonder he wakes up starved he has had a work out while he slept.

He is Beautiful, being a blaze chocolate mitted kitten as he grows I am constantly amazed as his markings fill in. His tail is becoming quite a statement.

He is Calm, Bear and I are practicing riding in cars and going into stores. He made his first trip into the grocery store and his “comfort cat” coat is on the way. He doesn’t mind the harness and leash to much and is beginning to enjoy our walks. 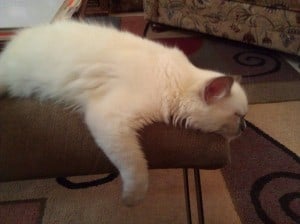 Yes, he is sound asleep!

He is also growing like a weed.
”my bear nest is getting a little small mom”

I am in love and I think my husband is jealous as Bear cat gets many more kisses than he does. As I play with Bear my husband also says “you sound like that lady in the videos”  I am now allowed to watch Youtube again but restricted to one visit a week to the pet store, (little does he know)

Bear – I Love you my little bitty (for now) kitty 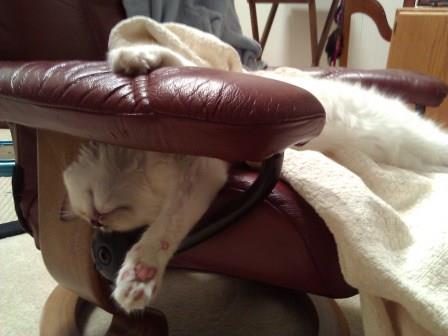 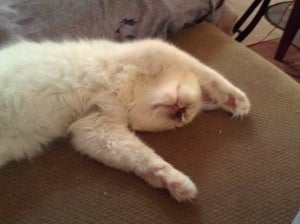 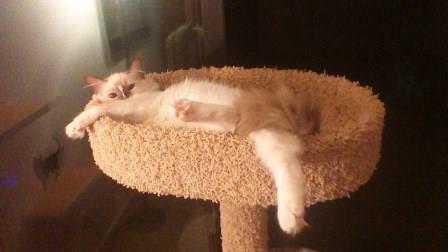 my bear nest is getting a little small mom 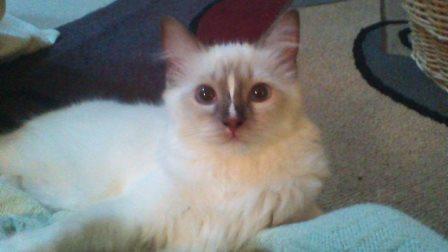