Written by my sister, Amy Dean 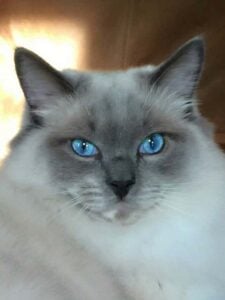 About a year ago, I had told Jenny that I would be interested adopting Ragdoll cats from a re-homing/adoption situation. I asked if she saw anything that really pulled on her heartstrings and that she thought that I might be interested, to forward the e-mail on to me. Over the course of those months, Jenny forwarded a few. None of them seemed to give me that gut feeling of, “That is my cat”. 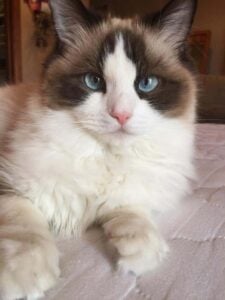 Fast-forward to May 2015 and Jenny forwarded me an e-mail from an owner who was looking for a new home for her two one year old Ragdolls. They were also about an hour's drive from Kansas City (where we live).  One female, Ava, a seal point bi-color (now Addie) and one male, Ash, a blue point mitted. She was located about an hour outside of Kansas City and they were not abused, but the owner had to re-home them for personal reasons. The previous owner originally asked Jenny if she would take them and while she was flattered—time, resources and just bluntly, four cats would be a bit much…. Plus, I think Charlie would have given her the cat version of the middle finger.

Through many e-mail exchanges and pictures/videos, my cousin Jill, Jenny and myself went to go see them. Ava (Addie) and Ash lived in a very nice home in the country and immediately could tell they were VERY well-loved and cared for. Their previous owner had so many toys that Jenny had reviewed on her website such as the Petstages Easy, Scratch, Snuggle and Rest and Bergan Turbo Scratcher. I explained to their previous owner that I would like to visit the kitties several times before I made my decision. Not only did I have the potential to bring home one cat, but TWO. They had grown up together in their first year, so I knew I didn’t want to separate them. I lived with Caymus and Murphy for many years and knew that it would just be cruel to separate two cats.

After that first visit, I explained to the previous owner that I wanted some time to digest the situation and see how I felt after I left them. Sure enough, the next 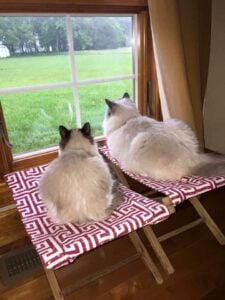 morning, I woke up and said, “Those are my cats.” I didn’t want to jump to any quick and rash decision because ultimately, these were my kitties for the next 15+ years. The previous owner made it clear to me that she was not just going to give them up to anyone. It had to be the right fit and she would keep them if she couldn’t find a suitable replacement that would love them as much as she did. She was very familiar with Floppycats and had seen me in videos and pictures before.

Two more visits occurred before I took them home. The second visit was with my Mom and Aunt Jean in late May, when I told the previous owner that I wanted to adopt them. The last visit (before I picked them up on Sept.12th) was with my Mom and my boyfriend, Kirk, in July. In this story, months are passing and you’re probably wondering why I didn’t take them home yet. In late May, I explained to the previous owner that I had a summer booked of plans including traveling and the last thing I wanted to do was bring Ash and Addie into a situation where I was leaving all the time and their beginning with me would be too 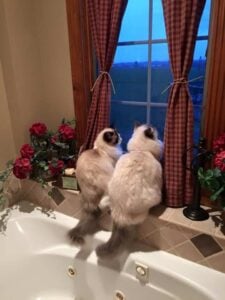 unfair. She agreed and was willing to wait until my schedule became a little less hectic. I was so appreciative of her flexibility and understanding. 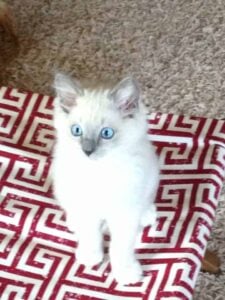 Ash as a kitten 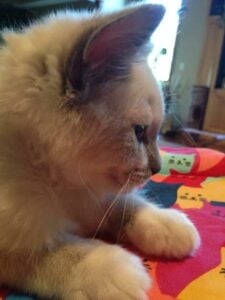 Ash as a kitten

September 12th came in a flash. My mom and I went out to pick them up early afternoon and their previous owner generously gave us all of their cat toys, cat tree, litter box, etc. She understood the importance of sending them off with things that they knew already (smells particularly) and that would make them the most comfortable in their new home. I promised the previous owner that I would stay in touch and we still do. I exchange photos and videos with her on a weekly basis.

I am so honored to be Ash and Addie’s mom. They have brought so much joy to my life already in the four months I’ve had them. I look forward to their personalities continue to emerge and all the laughs along the way. Thank you for the love and support that all of the Floppycats fans have already given me!