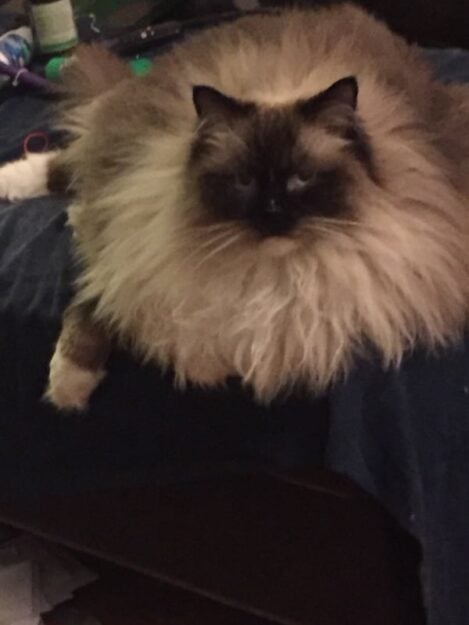 This is my five year old Ragdoll cat, Armando. At the time, my son moved out and I was looking to get a cat. Growing up I had mostly dogs as a pet and was missing that companionship. I was watching a show on Animal Planet that showcases the different breeds. That is where I learned about the Ragdoll and fell instantly in love! Of course I had to do more research and became really interested in them. I then explored put myself on waiting lists and then found this breeder in Connecticut. We exchanged emails and she provided photos of my potential kitten. I was interested in a male kitten and she had one. He was so tiny and his white blaze made him look like he accidentally got into a can of white paint. I knew he had to be mine! The breeder asked if I could come up to her home, so that we can meet and I can meet my little fellow. He was running around with his litter mates and was very playful. Initially I had concern because his favorite toy was that of a stuffed bird. This was concerning because I have a bird too! Luckily there has been no problems between the two! 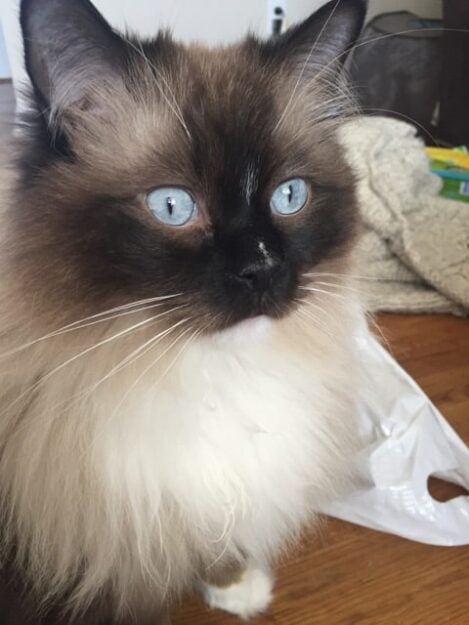 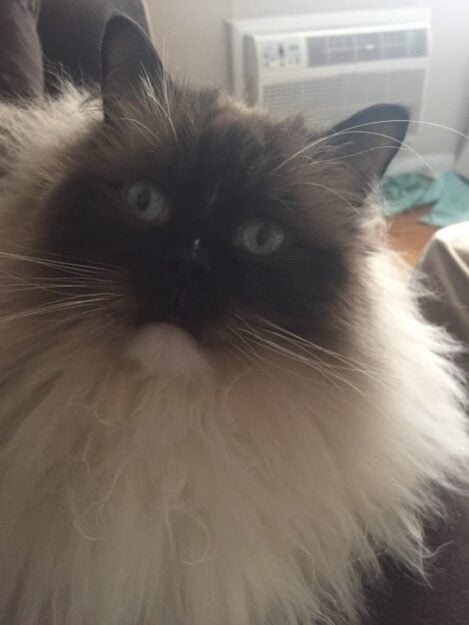 Usually the first thing that people mention about Armando is how beautiful he is. Not that I am biased, but he really is a good looking cat. Sometimes I feel bad that the breeder didn’t keep him for future breeding. Between the coloring of his fur and those bright blue eyes, he is a heartbreaker!! But I think my favorite part of his is his silly personality. Although he has slowed down a little bit, thank goodness!! Armando is still very playful. He enjoys waking me up in the morning. Usually by tapping me on the back. If that doesn’t work, he will try other methods, but it is just so much easier to give in to him because he is so persistent! He will then go hide, either in his cat carrier or in a corner, and as soon as I get up he jumps at me. I will scream and he walks away with a little extra swag in his step! 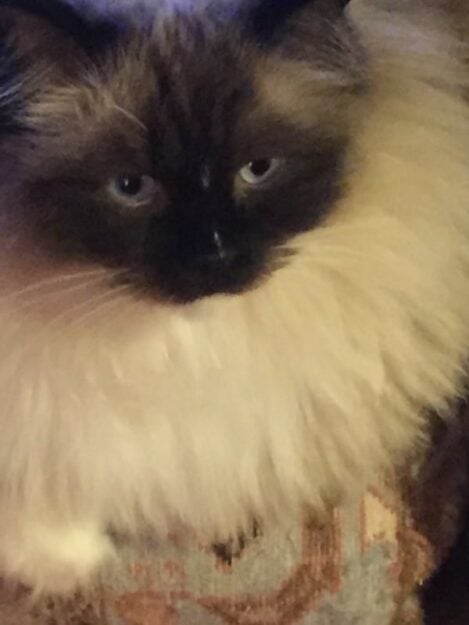 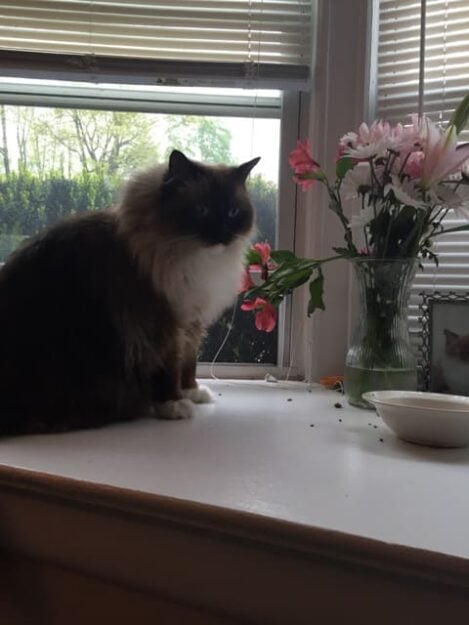 I have to admit, he is spoiled. Because I thought he was bored just being in the apartment, I do walk him on the leash. I am able to walk him in the backyard because my place or residence does not allow dogs. On a nice day, he will sit by the door and cry until I take him for a walk. He receives a lot of attention when he is in the backyard and believes that he is the Mayor of the backyard and wants to greet those who are outside. I also believe that saying “take time to smell the roses” must have been written by a Ragdoll cat owner, because that is exactly what Armando likes to do. He loves to stop and smell the flowers. Which I guess is good because then it makes me slow down and relax. 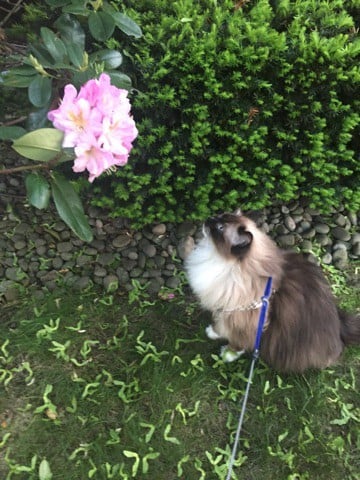 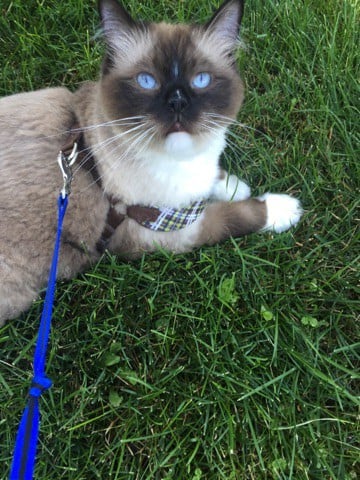 I used to work in a clinic and every so often, Armando would go to work with me. What was nice, is that Armando did not sit with me. He would sit in the front office and keep the staff company. He would find his favorite chair and lay there all day. People would come up to pet him and he would roll over on his back and request a belly rub. At least twice a year I have to take him to the groomers. In the summertime, I will get his fur shaved. It seems that he becomes a little more playful when his fur is cut. I think he thinks he is a kitten again!! They love him and tell me that he is well behaved. The only problem is that he likes to lay down, rather than stand! 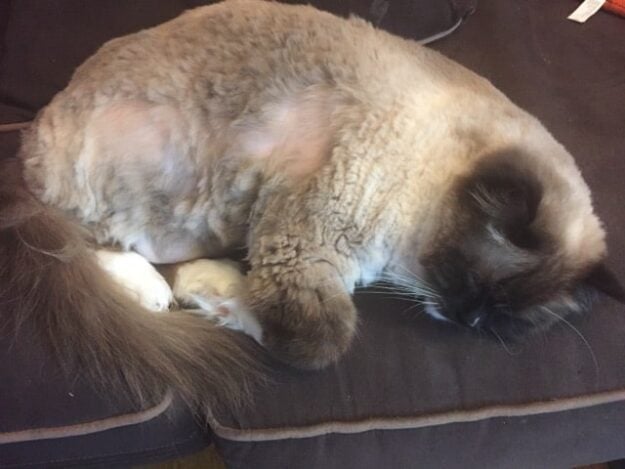 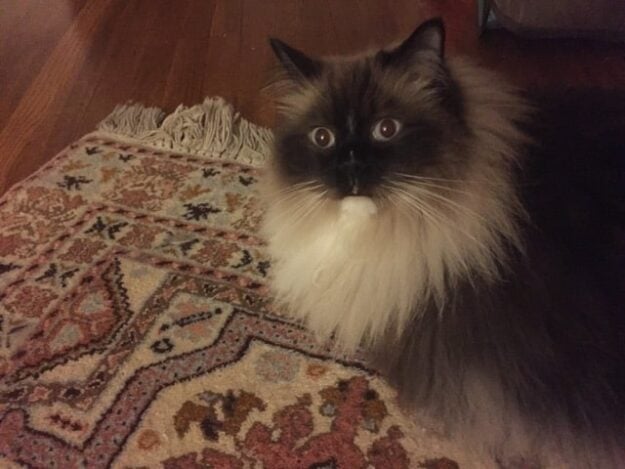 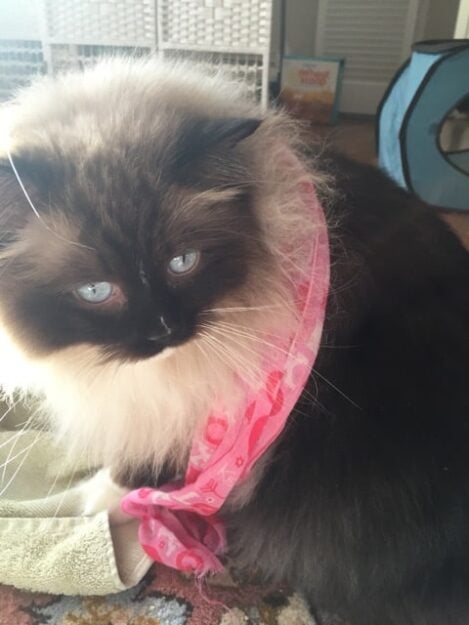