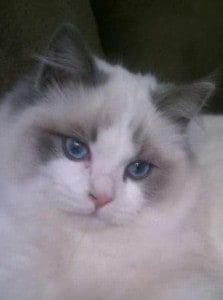 Last year I tried a new job in Minnesota, as a farm manager on a large Arabian farm. Moving there, from Wisconsin I ventured out with my old DlH cat, Becken, my Shorty Jack Russell Macy, and my Half Arabian Pinto gelding, Just Spotacular.

After 9 months there, my old cat became very ill and had to be put down. I had him since the day he was born, and he lived 17 years. It was a hard decision.

We decided to move back home in 2011, and right prior to our departure, I sold my horse to a wonderful show home in Ohio. This was a great fit.

Once home, I took on a new job at The Dancing Horses Theatre, as farm manager. We set up a new home, and the house was rented that really fit our needs. 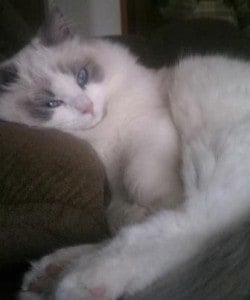 After a month home, my Jack Russell was accidentally let out of the house by my 3 year old granddaughter, and she ran straight to the road and was struck by a car, dying immediately. Our hearts were crushed!

Some 6 months went by and we couldn't hardly bear our empty home. By chance I saw a Ragdoll kitten being offered on Facebook, and fell in love.

Although that kitten was already sold, it set me on a search for a Ragdoll, and that search led me to Rouletii Ragdolls, in Fox Lake, Wisconsin. 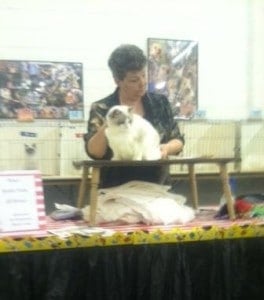 The joy my little man has brought me has healed my hurting heart . He is so soulful! I had read up on all the wonders of the breed, but really was surprised to find it just wasn't all hype!

Since my purchase in November, we have attended our first show, we he was judged by 15 judges. He won 15 firsts, two Best of Breeds, and two finals!

I could easily keep ten just like him!  He's the light of my day, my personal comedian, and a grand representative of his breed.

I hope to add a second boy in late 2012, from the same breeder. Everyone should have a Ragdoll cat! 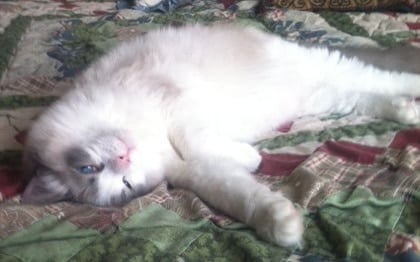